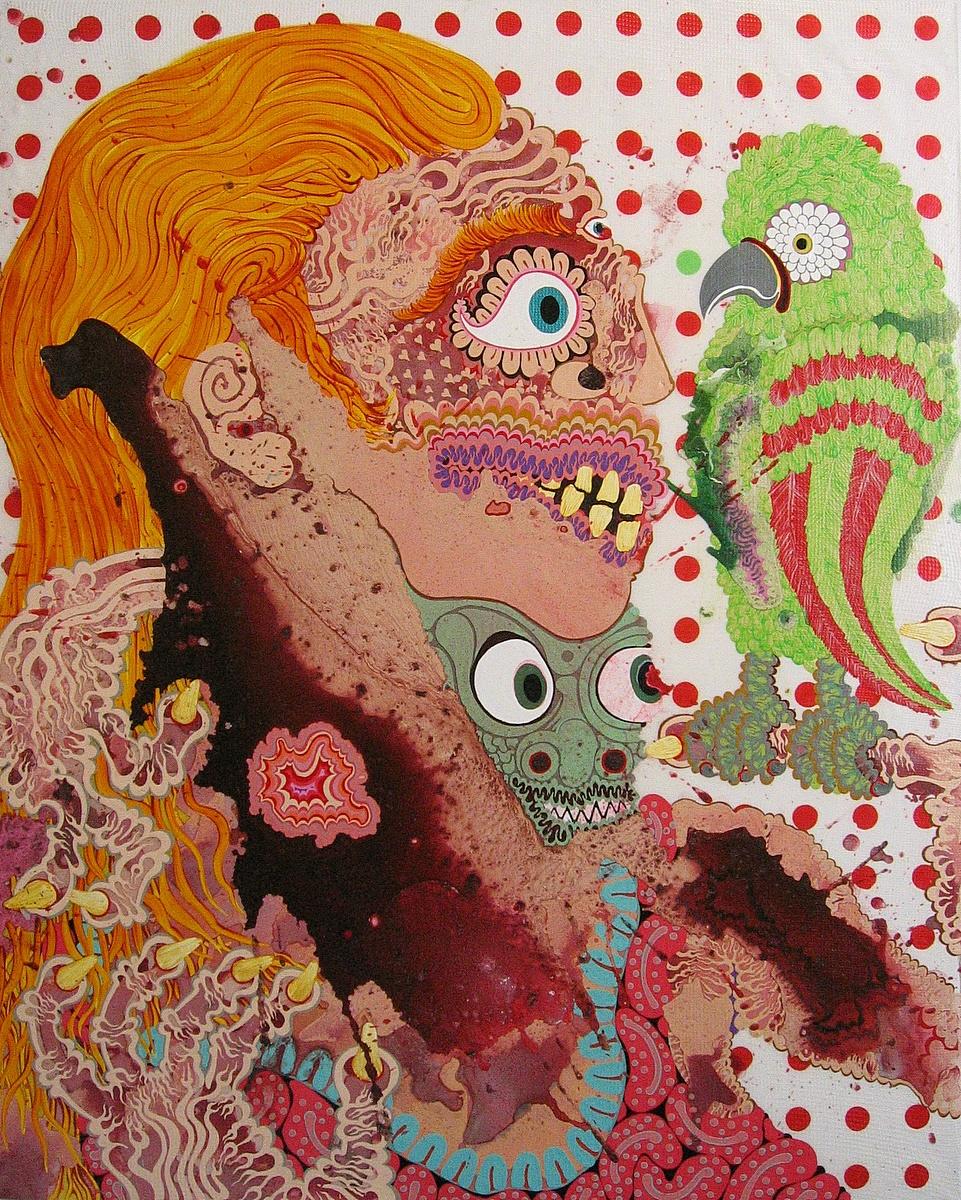 "Woman With Budgie" by Aaron Johnson

If you’re in the LA area this weekend,I highly recommend swinging by the New Image Art Gallery. They have an eclectic   group art show commencing this Saturday titled, “Octo Pusses.”

In the project room: “Horse Radish” by BAST

Neck Face: First gaining notoriety for the quick wit and gallows humor his graffiti left on cities around the world, Neckface is now also known as much for his gallery shows as he is for his reclusive persona. His first solo show, “Witch Hunt,” was held at New Image Art in 2004, and a book of his work entitled “Satan’s Bride!!” has since been published. Neckface’s drawing style and humorous musings are now easily recognizable and familiar elements of the urban landscape. Carlo McCormick, art critic and curator, calls Neckface “The most prolific and idiosyncratic street artist working today.”

Neckface has previously had solo shows at dpmhi (London), Monster Childeren, (Sydney), and was included in “The Bay Area Now” show at the Yerba Buena Center for the Arts (San Francisco). He has also shown at The Luggage Store Gallery (San Francisco), just to name a few. Neck Face has also been featured in numerous global publications.

From “The Occupation” series by Cleon Peterson

Cleon Peterson: Cleon Peterson is an LA based artist whose chaotic and violent paintings show clashing figures symbolizing a struggle between power and submission in the fluctuating architecture of contemporary society.

Cleon’s paintings are monochromatic while channeling at the same time the fashion sensibility of the early 80’s, complete with skinny ties and day glow colors.

Cleon received his MFA from the Cranbrook Academy of Art in Detroit, MI and a BFA in Graphic Design at Art Center College of Design in Pasadena.

He has been featured in LA Record Magazine, Juxtapoz, and Eyes Cream (Japan).

Artwork by Antonio Trecel Diaz
Antonio Trecel Diaz: Antonio Trecel Diaz is a New York based artist whose drawings depict images of death, violence and dismemberment. Diaz creates symbolic systems that screen the traumatic, renderings of figures slipping beyond recognition. In Diaz’s economy the body is always a body in distress, torn apart by malfunctioning tools, impossible longings, charts and representations. Drawing becomes the expression of loss, lack and failure that doubles itself through the malformed subject matter: humans and animals in states of ambiguity, amputated and dissected; forms manipulated by external forces: severed bodies, incomplete lines and marks that all end in the creation of something other. Drawing as desire, as a form of archaic magic where there are no ideals, figures or objects, only moments of immanent assemblages pieced together, pushing themselves towards the horizon of the visible. The content of Diaz’s work exist somewhere between its subject and the marking, the mark being foundational and the subject being secondary in that it is an armature which is quickly effaced and only surfaces as effacement. Disappearance takes on the quality of a residual build up on the surface of the paper, which always points towards the limits of representation, the limits of perception. This is the trace that is so essential to drawing: the shadow cast by communication.

Judith Supine: Judith Supine lives in Brooklyn, NY. Supine could not speak until a month after his seventeenth birthday. He could not physically articulate words, he could only squeak and grunt. Supine often drew pictures to communicate with his family. His mom saved all of his pictures, just one of many reasons of why his mom is great.

His work has been exhibited in at the Leonard Street Gallery in London, he also took part in the 11 Spring Spring St. show, curated by Wooster Collective, ABC no Rio Gallery in NYC, and has been talked and blogged about in a profuse number of street art & culture publications such as: The Village Voice, Wooster Collective, Animal New York, Visualresistance, A Brooklyn Life, Art of the State Blog, Tiki Chris (Juxtapose Magazine), Feedmecoolshit, Sidewalkpressed, just to name a few.

“Woman With Budgie” by Aaron Johnson

Aaron Johnson: Aaron Johnson lives and works in Brooklyn, NY, and holds an MFA from Hunter College (2005). His work has been exhibited at institutions including the Hudson Valley Center for Contemporary Art, Peekskill NY; and The Knoxville Museum of Art, Tennessee; and at galleries such as Stux Gallery, NY; Priska C. Juschka Fine Art, NY; Maddox Art, London; and Mogadishni, Copenhagen. He has received reviews in numerous publications including the New York Times, Art News, Whitewall Magazine, Time Out London, Beautiful/Decay, and The Village Voice. His work is included in the permanent collections of the Frederick R. Weisman Foundation and the Museum of Modern Art.

“Works that are visceral, beautiful and flamboyantly timely, which is saying a lot” Roberta Smith, The New York Times

Gino Perez: Gino Perez is a Los Angeles native with Mexican and Native American roots. From the time he was born he was surrounded by art. His mother is an artist and a seamstress. His father, an artist as well, spent much of Gino’s early life in jail and battling addiction.

Growing up in Highland Park with four sisters and a brother, Gino countered his humble beginnings by immersing himself in his love for skateboarding. By age 17 he was traveling the world as a professional with such notables as Mark Gonzales.

It was on his travels that Gino came into contact with the works of Picasso, Miro and Basquiat, whose pieces inspired him along with those of his own parents as he started drawing and painting.

In the Project Room:

BAST: Showing small intimate collages from his Brooklyn studio, BAST is an artist whose roots are as much tied to Brooklyn as rice is to China. He was raised on a healthy dose of break dance culture where the order of the day was learning from the streets and gaining fame by gracing its walls. With roots planted firmly in the pavement it is easy to see why destruction and precarious situations are often depicted in his work. The medium is often addressed the same way, treated as if it had been left out in the rain, then later beaten to a pulp for good measure – before being brought inside and nursed back to health.

BAST’s work continually incorporates a smug sense of humor, twisted story lines and his own spin on Americana – in a “gold front teeth” sort of way. Guns, grenades and Molotov cocktails are often waiting to be unleashed by a host of Disney and WB characters who seem to use their weapons as carelessly as kids use water balloons, often asking the question, “What if cartoon characters ruled the world?”

Like the dozens of “eyes” that often grace the faces of BAST’s characters, he too seems to have the need for more than one pair. His images are often an eclectic montage of pop culture, legal action and guerilla warfare that seem to retain a ‘sense of immediacy’.