From track one on “fits,” it’s obvious White Denim isn’t holding back. They are ripping out the stitches and going their own way. Each song boasts new surprises and a continuously morphing sound. As the album progresses, you can’t quite figure out where they are going or what genre they want to be in, but keep you hanging on with moments where it all comes together in brilliant groovy rock cohesion. 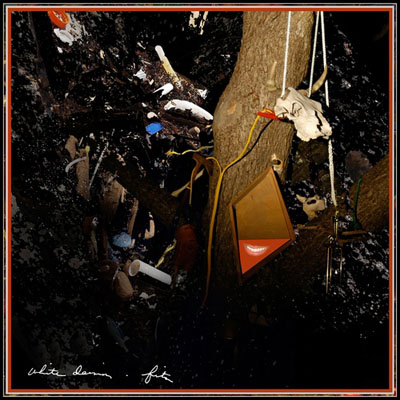 Jamming across the gamut from southern-influenced handclaps to straight funk then rocking into a psychedelic Doors-like haze, White Denim genre jumps like peas on a hot griddle. The tempo, tone and overall feel can go from mellow indie rock to a raging schizophrenic pace often within the confines of a single track. The all-over-the-board style can be tiring to listen to for too long, however, the trio has that indefinable “it” quality that captivates.

Standout tracks include “Say What You Want,” which is a ruckus jam filled crunchy guitars sailing into a nearly surf rock feel. They mix up the genres again with “Sex Prayer,” a funky instrumental track that sounds as if it belongs on a ’70s film soundtrack. All of the songs on “fits” have that feeling of something you’ve heard before. Whether they are coming at you with ’60s garage rock or a’80s hair metal inspired track, White Denim isn’t covering all new territory. Yet, having album chuck full of such miscellany certainly makes for an intriguing listen as a whole, and that little something unexpected. With more tailoring on their next effort, White Denim just might find their perfect fit.