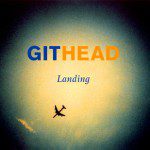 It could be that Githead is one of those bands that takes seeing live to really appreciate, or it could be with their third album the supergroup is still working out the style-melding kinks and just hasn’t quite found the magical musical middle ground. Or perhaps, they are totally happy with the sound they’ve cultivated. Whatever the reason, “Landing” just doesn’t blend into a rock-hard album. Dense rhythms mix with grinding guitar riffs in a repetition that is not altogether unpleasant, just well, kind of boring.

The group formed as a side project with members Colin Newman from Wire, Max Franken and Malka Spigel from Minimal Compact and Robin Rimbaud known to most in the electronic music game as Scanner. With “Landing,” it’s pretty obvious they are not making an album with mass appeal. On most songs the simplistic guitar riffs are done with intention playing up the understated, chanting vocals. The lively and steady drumming keeps those tracks moving ahead. On “Before Tomorrow,” the guitar and drum repetition is intense, but also becomes satisfying after multiple listens.

Yet, Githead is not solely a one-note pony. With “Over the Limit,” the band amps up to a more driving sound with punk-influenced vocals and styling. This is where they sound their best and most comfortable, but fails to bring the same intensity to the rest of the tracks.

Just because the album doesn’t have total cohesion, and isn’t sparks and fireworks at every moment, does not mean that it is not well crafted. It feels like Githead made the album they wanted to make, and while some songs fall flat, they are played skillfully and by a talented, super group.