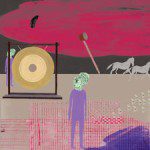 The album has moments of awesome mixed with some stinging minutes of duplication. You know the kind where if it were a live show, there would be a girl in front twirling, eyes-closed in a magical, musical stupor. The kind when they plunge head first into jam-band stereotypes, and fail to lend an editing ear going on their jamgent (jamming tangent) of swirling guitars, uber-repetitive lyrics and steady beats. These moments are peppered throughout the album, and while they might work at a live show, usually fail on disc.

Luckily, these jams do not absorb the whole of “American Gong,” and songs such as “Rockability Party” and “Bye Bye Blackbird” rock to a wholly different pace. These songs evoke more of a 60s rock feel and don’t get lost in the psychedelic spins. The standout is the starter, “Repulsion,” with its echoing chorus, power vocal yelps, classic-rock feel, but modernized with its uneven pace and bite. For all their experimentation, Quasi proves that magical moments can still happen after seven albums, 16 plus years and a divorce.