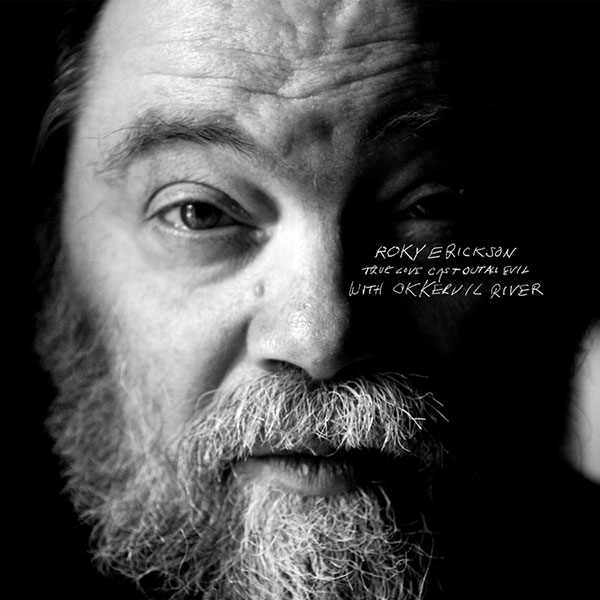 The halfway point of “True Love Cast Out All Evil” is “John Lawman” where just after the three-minute mark, the music crashes and a far-away sound of an announcer speaks: “Roky’s going to take a break, he’ll be right back in just a bit…” and we hear the singer thank us and walk out.

For those who have followed the tragic, longtime-eccentric life of the Austin musician since his days fronting the decisive 13th Floor Elevators, on up through the post hospitalization songs of Bleib alien and the stories of Martian inhabitance and mail obsession, it seems that to be a true fan, you had to get used to the now 62-year-old musician waking in-and-out of the music.

From schizophrenia, insanity, drug charges, scene-defining resonance (garage and psychedelic music wouldn’t be the same without Erickson’s contributions) a documentary, life time achievement awards, getting covered by ZZ Top, R.E.M. and Jesus and Mary Chain, and playing a wealth of festivals, it seems that Erickson can’t spend too much time away though before something digs him back out again.

Having a handful of retrospective releases since the 80’s, “True Love Cast Out All Evil” marks his first set of original material in close to 14 years. With fellow Austin folk rockers Okkervil River as his band—leader Will Sheff produces it—the record’s first few songs play on with the scratchy, premature, hymnal-like “Devotional Number One,” a short tune that flows but soon crescendos into a busy-street whirr of noise cut that’s short into the delicate “Ain’t Blues Too Sad.” A sonic mix-match with its predecessor, “Sad” possess a sort of genteel orthodoxy, rooted in a country blues sway, that sets the stage for the rest of the album.

For those picking up “True Love Cast Out All Evil” with hope of being introduced to an American pioneer, because your favorite band Okkervil River worked with them, this may not fill both of your voids. The Okkervil River sound is but a murmur once to compare it to “Stand Ins” or “Black Sheep Boy.” If there’s any gap to fill on this front, it’s the traditionalist, encompassing production of Will Sheff that deserves your applause.

Single “Goodbye Sweet Dreams” is the standout. The growing, beautiful moan of “I once had a heart…but now these dreams have grown so cold,” makes a perfect subtitle to the cold stare of its singer on the album cover.

For Erickson, “True Love Cast Out All Evil” plays with a noticeable traditionalist attitude for his contemporary listener. For those wanting (or for that matter merely thinking) of the teetering, psych-out jangle of the Elevator’s seminal tunes, this record rarely even hints at it. Sure, knowing Erickson’s tumultuous life, these songs could help to bookend the past; “Goodbye Sweet Dreams,” “John Lawman” and (the most literal of this being) his plead on “Please Judge,” but the truth of the matter is that these songs are a different form: they are novel, polished and clean.

Guitar-led blues and pedal steel set to choral highs and gentle flowing narrative; the bulk of these twelve songs seem to have some white halo surrounding them. For the man behind a drug-laced counter-culture, years of tangles with the legal system and struggles with his own health and sanity, this comes as a completely convivial surprise that’s worth it for any fan to hear.