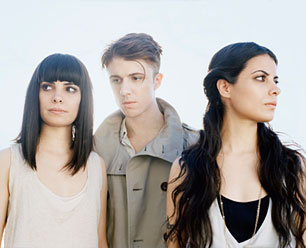 New York outfit School of Seven Bells (SVIIB ) are still one of the firmest examples of the electro-tinged, shoegaze-soaked dreampop that’s (still) permeating the blogosphere. Started as a then side-project from Benjamin Curtis of The Secret Machines and identical twins Alejandra and Claudia Deheza (of On! Air! Library! if you remember), SVIIB debut “Alpinisms” was a radiant collection of (a more) organic poptronica that landed on my ‘Best of’ list back in 2008. It comes as no surprise that I was eager to hear the trio’s follow-up, “Disconnect From Desire” which was released last Tuesday via Ghostly International / Vagrant Records.

Five minutes shorter then its predecessor, “Disconnect From Desire” finds the band venturing humbly into much of the same celestial, starry-eyed sea as before except for this time, they clearly steer their ship all over the “Bands That Influence Us” list while making dutifully sure to include plenty of stop offs under the dance-club lights along the way.

The tracks on “Disconnect From Desire” are ultimately more approachable, more pristine, and more single-ready than before; boundaries are placed firmly throughout these ten songs, while known sounds are almost instantly recognized. “Dust Devil” is a high energy take on a Goldfrapp of Annie sound; “I L U” (wonder what that stands for?) is a direct, 1980s B-side ballad; “Heart is Strange” is the trio’s take on a pulsing synth soar sing-along (INXS or Depeche Mode are obvious throughout) while the awesomely-titled “Babelonia” is the known SVIIB girl/girl, choir-like serenity smattered with all things My Bloody Valentine’s “Loveless.”

Though it isn’t hard to stomach just how much the album wears its influences on its (record) sleeve, these songs are well structured enough to give the New York band’s sophomore album a polite bit of polished, start-to-finish closure that some of “Alpinisms” may have slightly lacked in it’s ascending resonance. Being frontloaded, “Disconnect from Desire”— which may be one of the best names for a disco club that never existed— plays much the same way many would imagine an ideal night out; the record starts strong with “Windstorm,” and it’s vocoded arpeggio of feminine yelps; rolls through with a few bits of bolstered, programmed pace, then— making the gentle come-down apparent— swirls though the interlude of “Joviann” and again picks up for that one last hurrah with “Camarilla.” Nearly finished, “Dial” helps to usher in last call with “Bye Bye Bye” (or the John Hughes-like credits-rolling song for the sober ones), before the candid drive home is found poignantly in “The Wait.” 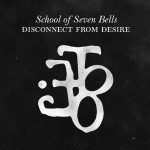 Click here for Grimy Goods’ review and photos of School of Seven Bells at the Echo!