Our boys, the Drowning Men just opened up for Lucero this past March 20 at the Belly Up Tavern in Solana Beach (San Diego). If you’re not hip to these guys yet, get on it. They’re definitely a band to keep your eye on and have toured with Flogging Molly, Alkaline Trio, Airborne Toxic Event, Lucero and […]

The Heartless Bastards have recently released their debut effort on Partisan Records, Arrow, back in February and they’re ready to provide fans with their new sounds with their latest tour. The new album flies straight, honest and true, and is thus far the finest work yet of this extraordinary rock ‘n’ roll band’s fiery, unforgettable sound. The Austin-based […]

Cults just headlined the newly re-opened Music Box this past Thursday, March 22. Now that the kids have a few more tour notches on their belt, they really owned up to their chops and charm at this show. The last time we covered Cults, back in July at the Center for the Arts in Eagle Rock, the band kicked off to […]

Metallagher… the way Metallica is supposed to be. Yup, you’re in for a very hardcore rock show as you headbang to tunes your favorite old school Metallica songs played with front man Gallagher. Basically, it’s going to be a night of musical mayhem with Metallagher and opening acts, White Shit, Death Hymn Number 9 (one of our […]

As delivered with every music festival we attend, here’s out photo gallery on all the lovely (and weird) girls and boys we came across at SXSW. We don’t discriminate, we love all walks of life … except for bros and bro-hoes. Photography: Dominoe Farris-Gilbert   Check out last year’s SXSW hotties: SXSW Photo Fashion Part 1: […]

Classified as “electronic punk,” Mindless Self Indulgence’s music is more like a buffet of various genres, including punk rock, alternative rock, electronica, hip-hop, and industrial. Formed in New York in 1997, the group’s music is influenced by early 1980s culture and frequently contains samples of early 80’s hip-hop or rock, as well as chiptune-style beeps and tones. They […] 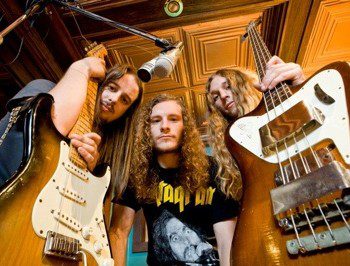 Iowa based Radio Moscow play the Satellite on Friday, March 30.  Their previously unreleased debut 3 & 3 Quarters comes out soon on Alive Natural Sound Records, not to mention they just dropped their 3rd album, The Great Escape of Leslie Magnafuzz in October 2011.  Get ready for a plethora of psychedelic blues garage rock […]

Providing sunny melodies, infectious grooves and ever-boisterous harmonies, Dinosaur Feathers captures the perfect balance of indie rock with the tropical warmth of bands from yesteryear, like the Beach boys. The Brooklyn-based quartet is headlining the Echo on Thursday, March 29, 2012 with U.S. Royalty, Strange Marking and The Art. Tickets to the show are $8 […]

Sharon Van Etten graced the Avalon stage this past Tuesday, March 20. The Brooklyn songstress makes magic out of stark, yet gorgeous and refined emotive folk tunes and last Tuesday’s performance was just that: pure magic. Celebrating the release of her new album, Tramp, released on February 7, Sharon won the hearts of everyone in the audience with her […]