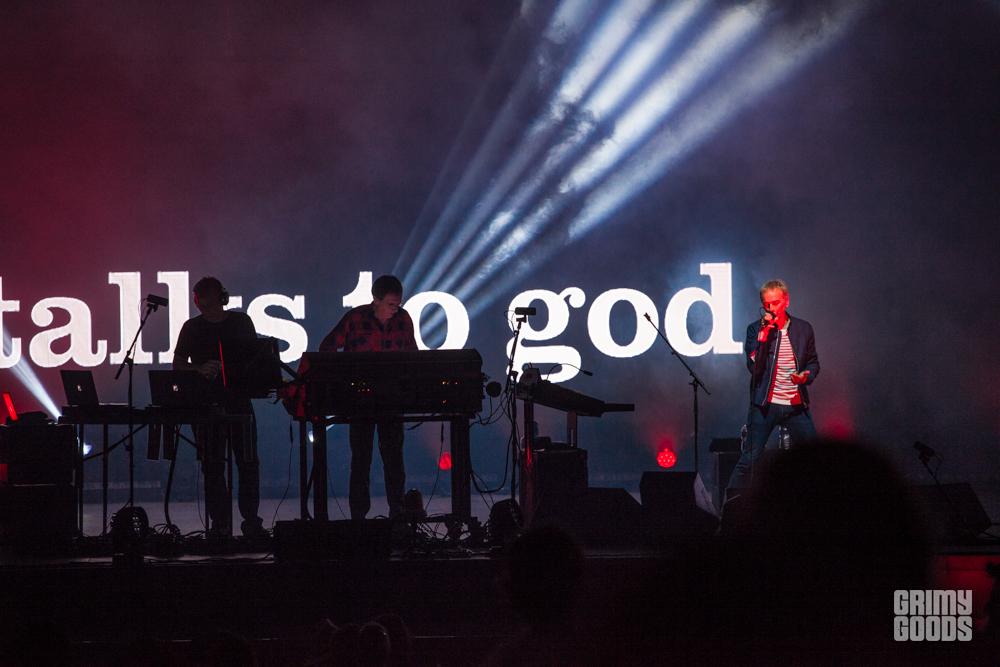 For most long time aficionados of electronic music, when you hear the acronym “EDM,” you tend to cringe. Visions of bros fist-pumping to Skrillex at Electric Daisy Carnival fill the mind and make for a tainted perception of electronic dance music. Well, before “EDM” and before the electronic dance music culture became a button-pushing game, there was Underworld. The British electronic group are the purveyors of all things electronic music. From trance, techno, house, breakbeats and early jungle—Underworld were at the helm of it all. Laying down a variety of sounds and vocals that run from dark to joyous tones, Underworld have been doing it for 36 years, and this past Sunday at the Hollywood Bowl, summer in Los Angeles kicked off with a blissful performance by Underworld.

The Hollywood Bowl was bustling with a happy and mature bunch of fans. While many were also here to see the sensational opening act, Jungle, most were here to relive their youthful club days. Taking the stage with a the words “Mmm… Skyscraper I Love You” projected on the backdrop, the crowd let out a roar. As Karl Hyde, Rick Smith and touring memeber Darren Price took their places, fans got up from their seats and began to move to the tribal beats of the opening track. We had a pretty great view from our box seats, but we were equally mesmerized by the stunning jumobtrons projecting abstract live footage of Underworld’s performance. It made you feel as though you were watching a music video from the 80s because of the classic way they overplayed different layers of camera shots on top of each other in a uniquely curated fashion.

As Hyde worked the stage with a most infectious stage presences, Smith and Price released the beats behind a massive console that produced some of the greatest electronic sounds ever heard. As the sun fully faded and the beauty of the night soaked in at the Hollywood Bowl, a sea of glowsticks dance in the air and flew across the sky. Without a doubt, old school ravers and club kids were living it up tonight. 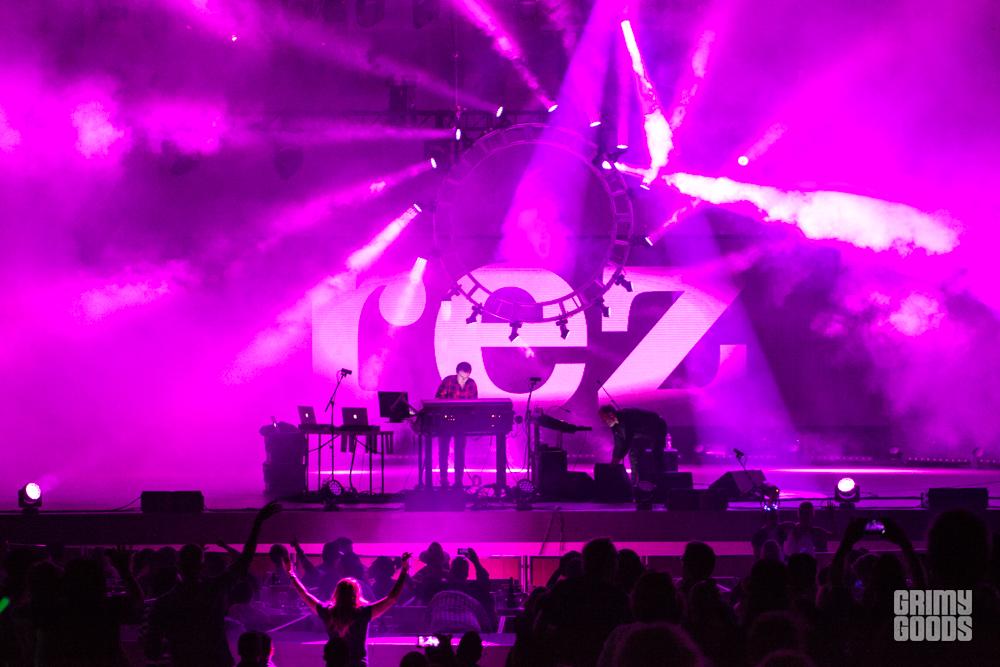 I myself got lost in the moment numerous times, but especially when the gorgeous percolating sounds of “Rez” came into play. The uplifting track took me back to a late 90s rave when Underworld played this song during sunrise. Recalling the experience sent shivers down my spine, and goosebumps all over my arms. The heavy build up of the song transported me back to a beautiful moment of music and mind altering substances. Oh, to be 18 and without a care in the world again.

While songs like “Rez” brought bliss to myself and many other fans, tracks like “Pearl’s Girl” and “Scribble” delivered the fierce breakbeats. An early form of jungle, fans were feeling the vibes and bustin’ out the moves trying their best to keep up with the beats.

Watching Hyde sing and work the stage was inspiring. The way he captured the essence of each song was contagious; we definitely felt his energy. Before performing “Dirty,” he shared with the crowd: “36 years of the music and we’re still alive. Still alive after experiencing some heavy dark stuff, but my good buddy here (Rick Smith) turns the darkness into something beautiful.” Underworld then brought “Dirty” to life with an emotive performance.

With good vibes all around, Underworld kick-started the first day of summer in the most memorable way. The crowd was on a natural high (and some with a little bit of help) and absorbing all the positive energy that Underworld was bestowing on us. We danced, we laughed, and we got lost in aural memories. It was a perfect night at the Hollywood Bowl that won’t soon be forgotten. 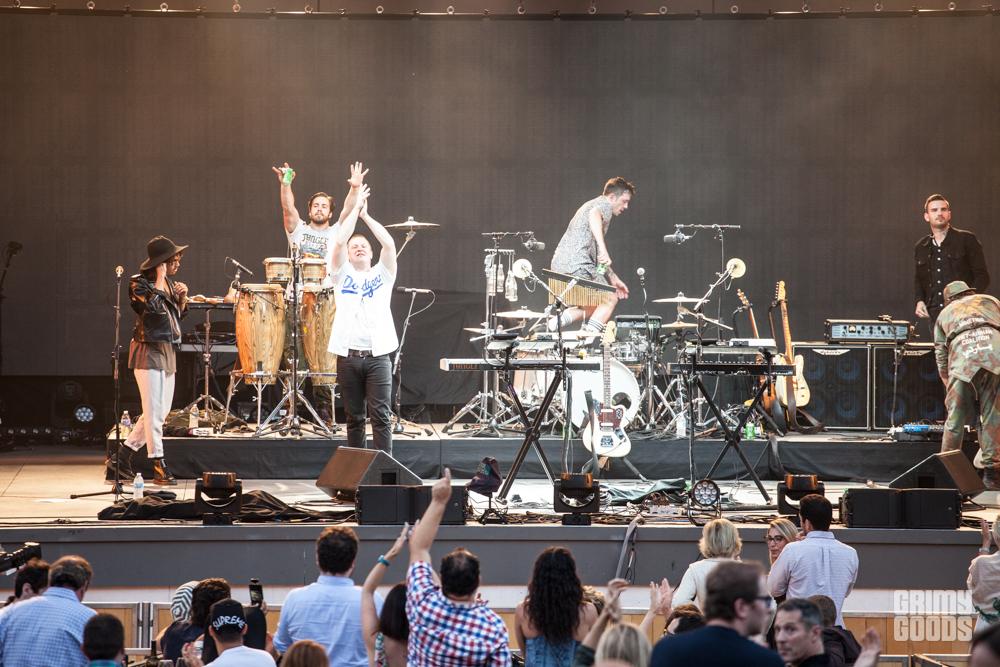 But before Underworld took the stage, London-based disco soul collective, Jungle warmed up the crowd with their feel-good music. Starting the night off with “Platoon” from their self-titled, debut album that was released last year. They followed with fan favorites like, “Accelerate,” “The Heat,” and “Lucky I Got What I Want.” Jungle’s sound is so funky and soulful that even those having dinner in the boxes couldn’t help but get out of their seats to bust a couple moves.

While the band was initially founded and made up of just two members, Tom McFarland and Josh Lloyd-Watson, Jungle has grown into a soul collective that can feature up to 30 musicians at any given point in time. On Sunday, there were eight members on stage, including Rudi Salmon and Andro Cowperthwaite on back up vocals, Fraser MacColl on the bass, and George Day on the drums.

I imagine one of the reasons is the sheer manpower and instruments needed to recreate Jungle’s unique and impossibly complex sounds live. Even with eight members on stage, everyone seemed to be doing a little bit of everything. For example, throughout the night, Lloyd-Watson played both the guitar and piano all while on lead vocals. McFarland, equally busy, could be seen with one hand on the keys and one hand with a shaker while singing to the band’s most popular song, “Busy Earnin.’” 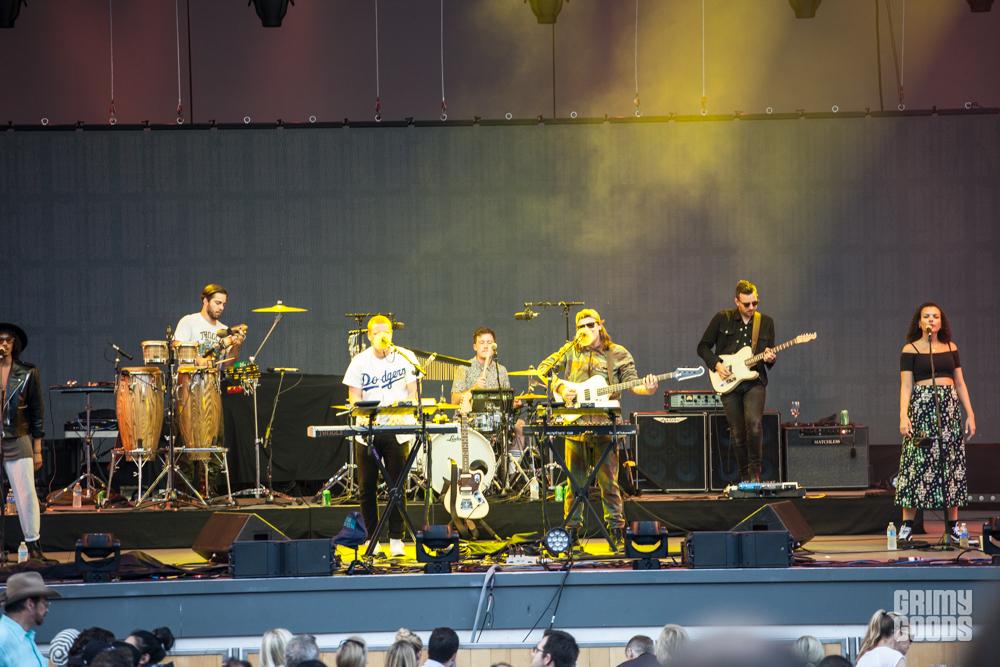 Things slowed down a bit when the band played the love song, “Drops.” The live rendition featured a beautiful solo by MacFarland, singling out the incredible voice and range he possesses, which may not be obvious on other tracks that feature lots of layered vocals. The band ended their set with irresistibly cool song, “Time.”

Jungle thanked the crowd once again and iterated what a dream venue the Hollywood Bowl was to perform in. Before walking off stage, Lloyd-Watson gave a special shoutout to an old-timer silver fox hippie that literally danced throughout their entire set. 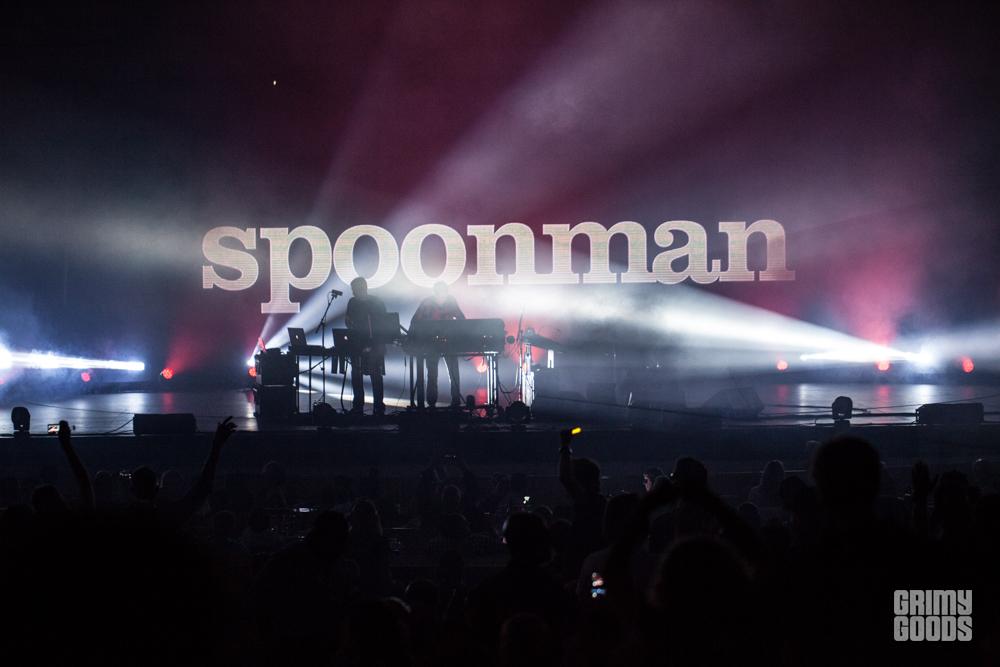 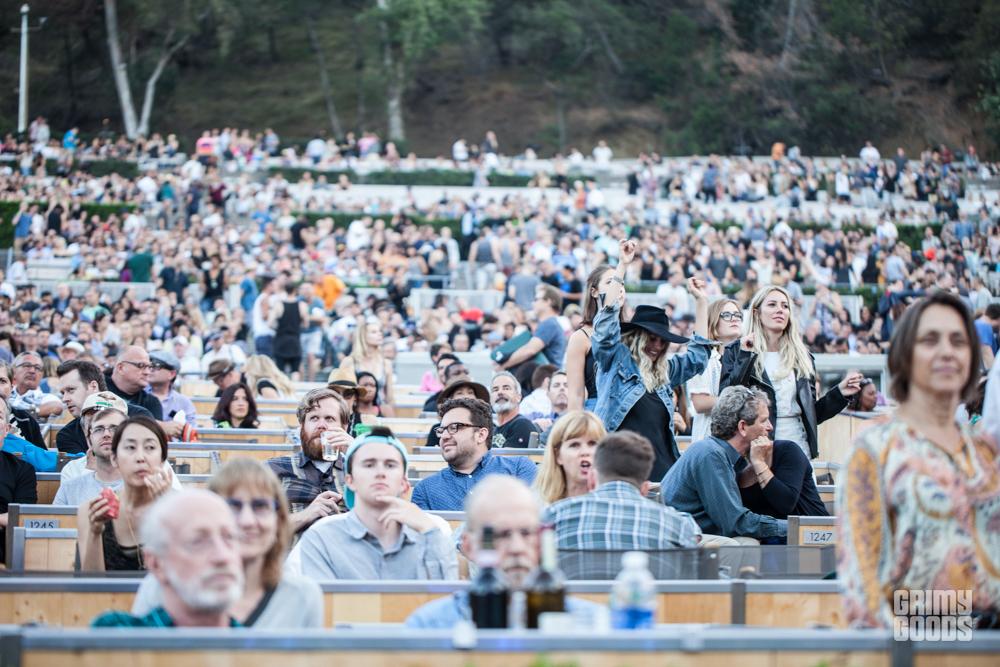 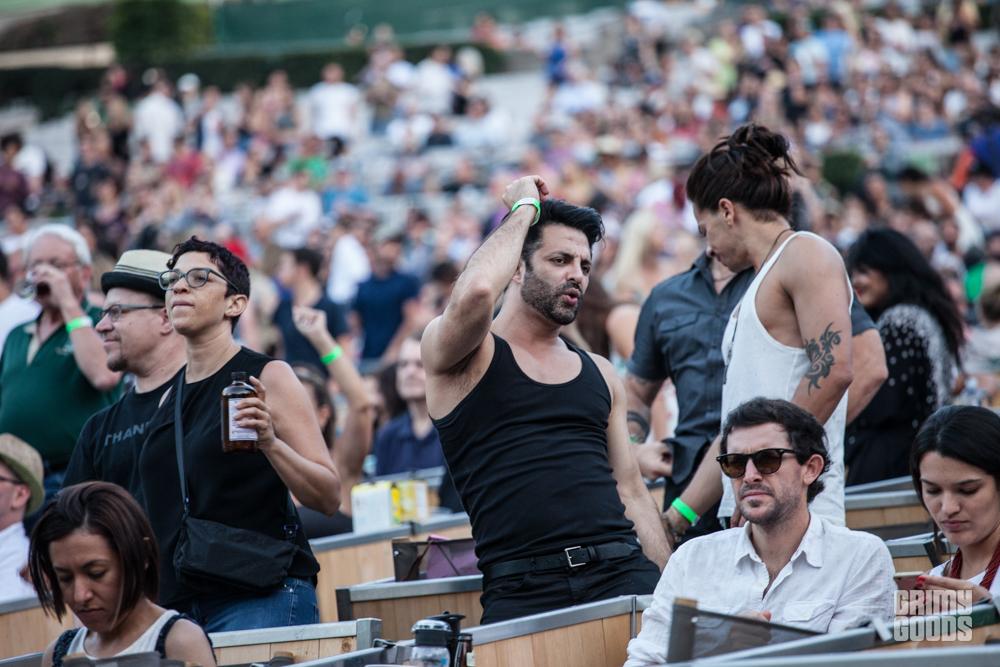 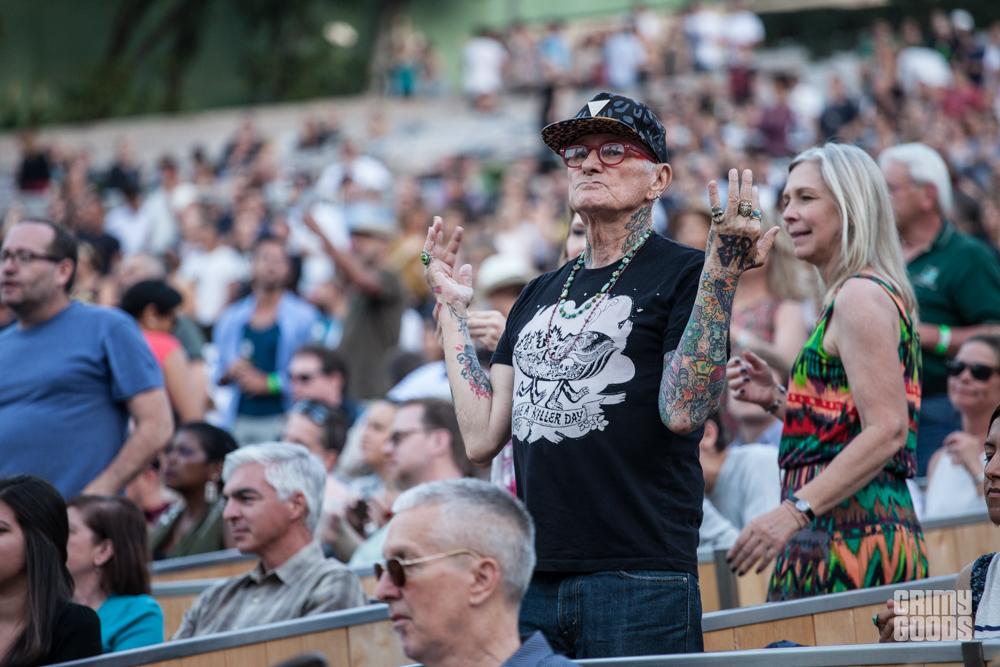 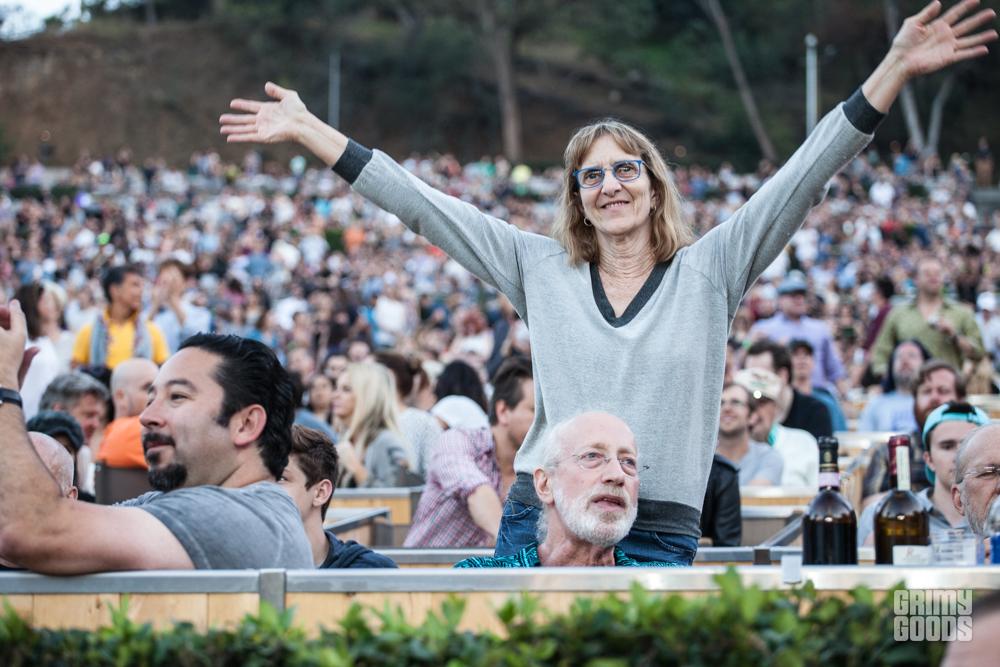 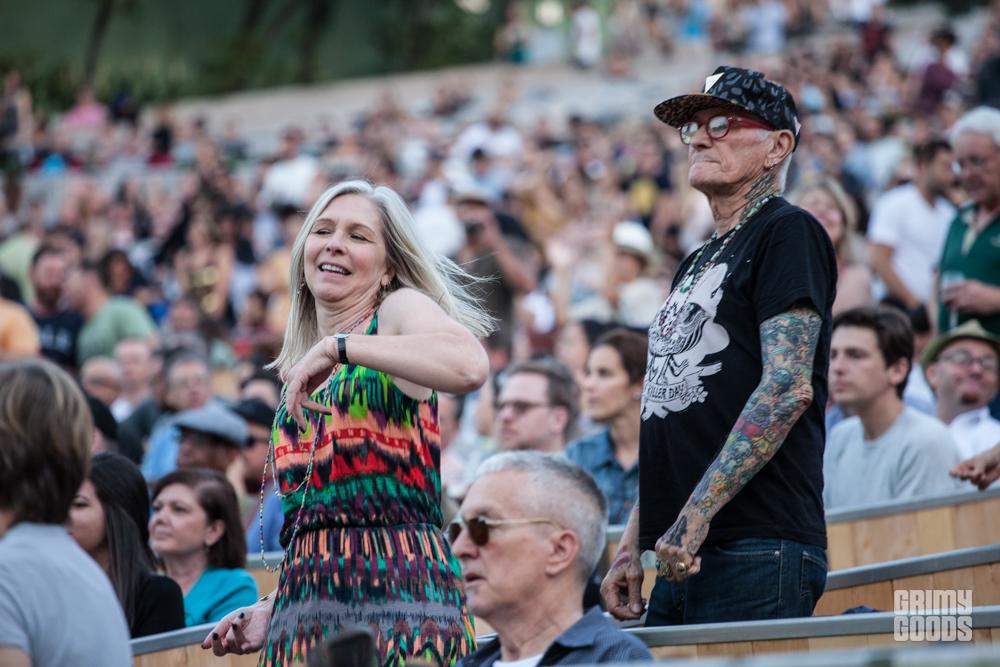 Win Tickets to Underworld at the Hollywood Bowl

Win Tickets to Jungle at the El Rey Theatre