How many times has Ty Segall reinvented himself? This is a man who can churn out albums like no one I’ve seen before, and every time it’s a new experience altogether. His band always varies, and with his newest album Emotional Mugger out now, he has embarked on his tour with “The Muggers.” Charles Moothart, a member of Segall’s namesake band, was still in attendance last night though, as part of the opening act, CFM.

Moothart was the first onto the stage, and his long curly mop did a lot of the talking for him. CFM is a loud trio, clearly influenced by their compatriot Segall, while also finding their own voice. What that voice was saying, I couldn’t quite decipher, but I know that it was fun and filled with nascent enthusiasm. Moothart and his boys played with precision, even hitting the final notes to tracks in breathtaking unison. At one point, the couple standing in front of me began to have one of those conversations that are shouted into the other’s ear, but the song ended so abruptly that they became the loudest people in the room. (They didn’t seem to mind.)

CFM’s set was short, but they packed a lot into it, like a Ramones album. Moothart even sang with that punk twang that can easily be traced back to Joey’s peculiar singing voice. By the time CFM was ready to leave the stage, the audience had warmed up and though it seemed like no one had ever heard of this new band, they dug it. “Up next is Ty Segall and the Muggers,” Moothart told us as his band tuned their guitars for their final track. “You’re in for a treat.”

If you had been anticipating the release of Emotional Mugger, you may have watched some promotional videos featuring Ty Segall in a baby mask. Like Jenny Lewis’ Voyager jacket or the white flag from Gorillaz’ Plastic Beach, we were thrilled to see Segall brought that mask on tour with him, greeting us at the start with it on his head, his hair peeking out the back. “Thrilled” may not be the right word, as it definitely sits at an uncomfortable place in the uncanny valley, but what punk doesn’t love a creepy prop?

And punk he certainly was. Though he can play many instruments, Segall was only in charge of the microphone during this show, and he commanded the stage with it. After one song he removed the baby mask, and it felt like we were seeing him for the first time. The crowd ten feet in front of the stage was in a frenzy for essentially the entire show, egged on by Segall himself. He pulled out a rose from his jacket and motioned to give it to an audience member pressed against the stage, but before he did, he collected all his saliva and spat it onto the flower. I always forget how much punks love to exchange fluids.

That baby mask wasn’t just Segall’s unique way of introducing himself- in fact, infantilism played a big role in the show as a whole. “Where are your parents?” he asked the crowd at the beginning of the night. “Where is your mommy? Where is your daddy?” Everyone began shouting their answers, as if Segall was genuinely curious, but it came to light later that this was a recurring gag. He put the mask back on to perform “Big Baby Man (I Want a Mommy)” from his newest LP. He brought us two bowls of fruit, which he launched into the audience, bananas flying off the bunch, oranges being bounced around like a beach ball: “I was a newborn baby and I know you need your fruits.” He even revealed later (to some discouragement from the crowd) that he is a father of four. New band idea: Ty Segall and the Fathers Against Scurvy.

In Segall’s maelstrom of shouting, spitting, and baby talking, he also did a lot of crowdsurfing. This inspired many crowd-goers to kick off the stage and do the same, but they never got very far. As we neared the end, Segall introduced his band, but if he used their real names, I couldn’t hear them. One of the guitarists, who looked like an aircraft marshall in a jumpsuit and earmuff cap, I remember distinctly from one of those promo videos as Kyle, but I don’t remember hearing Segall actually say that. He introduced the sax player as a series of shrieks, and the synth player was Mr. Bobby. Judging by his beige floor length trench coat, though, I like to think he prefers to go by Detective Bobby.

For their encore, a lone guitarist came back out and began the riff to “Finger,” one of Segall’s most iconic tracks. Everyone was singing it before Segall even made it back on stage, but the band didn’t pull any punches once every instrument joined in. It was a great way to top off a set that only rivals Iggy Pop with that sort of “Raw Power”. 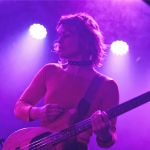 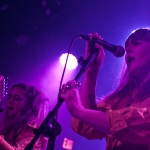 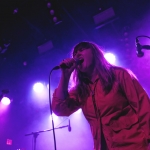 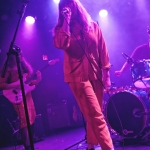 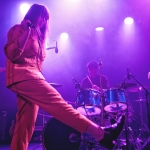 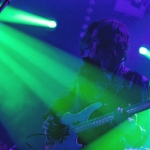 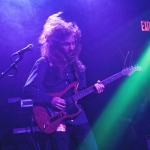 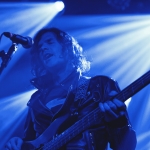 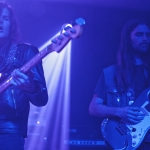 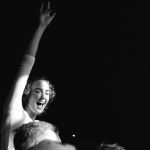 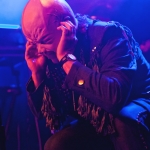 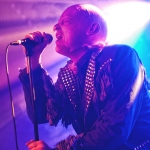 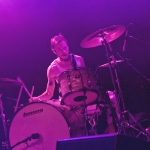 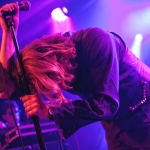 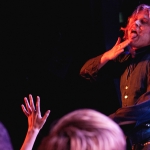 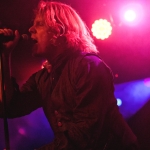 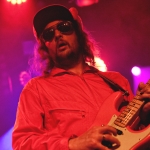 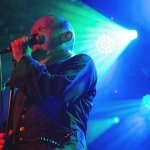 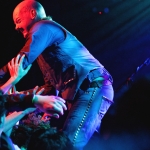 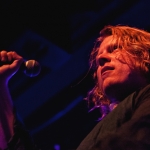