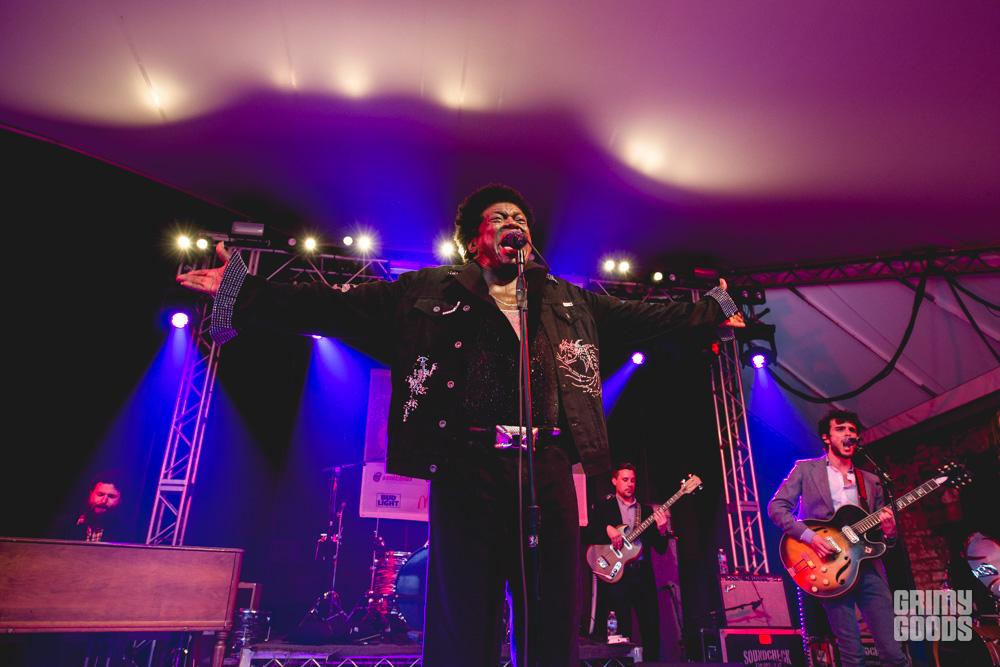 Wednesday at SXSW we covered quite a bit of ground, hitting showcases all over downtown Austin featuring acts like Kacey Musgraves, Charles Bradley, BORNS, HAELOS, Anderson .Paak and a slew of other awesome acts. Check out our full coverage of the day!

Things got started over at the Waterloo Records’ first showcase. There were some issues, as in the fire marshall was late in showing up and letting people in, so sets got pushed back an hour from their scheduled start times. By the time LA-based indie pop group PHASES went on, it was 1 PM, but they were well worth the wait.

Playing songs from their album Full Life, PHASES was a hit with the crowd, getting them to move despite the hot heat. The single “I’m In Love With My Life” was the standout, but singer Z Berg and her band’s backup harmonies shined.

Up next was BORNS, who brought most of the crowd to the Waterloo parking lot. Unfortunately, due to the time issues from earlier, he only got to play four songs, which bummed the crowd out. “American Money” and “Electric Love” were the high points of the brief set. 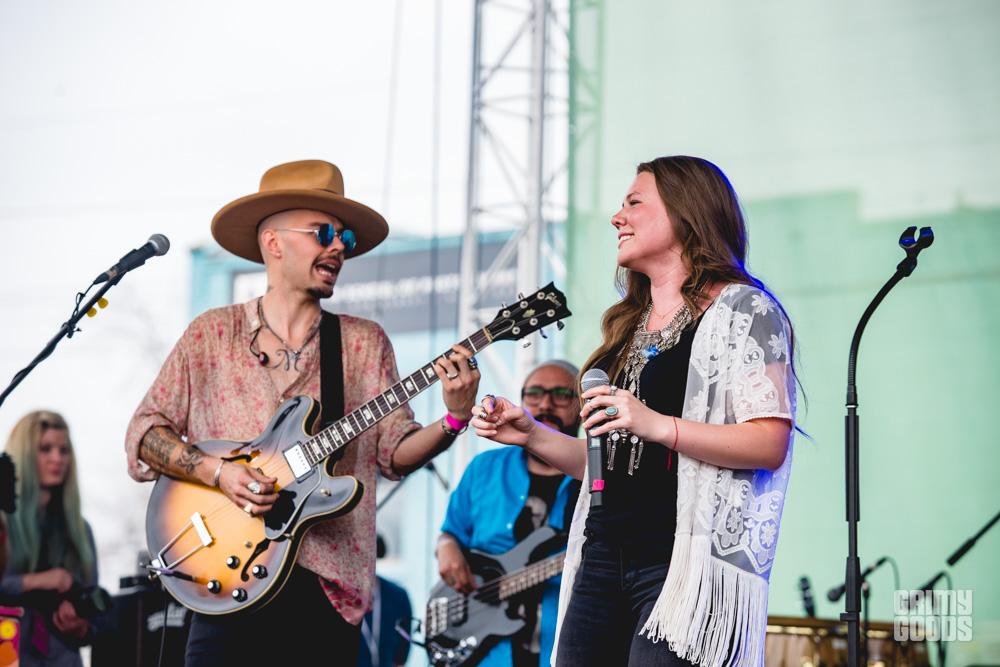 Up next it was across town to Spotify House again for another eclectic lineup. First that we saw was Jesse & Joy, a pair of Mexico City siblings that are big in their homeland and were well-received by the SXSW audience during their showcase.

Next I caught John Moreland, whose album High On Tulsa Heat was produced at home. His vocals were really arresting and his Americana vibes were a good fit for the audience.

Nashville alt-country act Rayland Baxter is a name I’ve been hearing a lot of already at SXSW. I found out quickly it is with good reason as he really impressed me with his arsenal of songs, most of which came from his 2015 release Imaginary Man. His father has played with Bob Dyland and R.E.M. and it is clear that musical chops are genetic based on his set.

Closing up was pop country star Kacey Musgraves, who has enjoyed a big last few years. They were all business, her band in suits and her in professional attire. A cover of Bob Marley’s “Three Little Birds” seemed a bit out of left field but she somehow made it work. She also mixed in covers of Gnarls Barkley’s “Crazy” and Nancy Sinatra’s “These Boots Are Made For Walkin'” but most everyone came their for her material. She didn’t disappoint with “High Time” and “Late to the Party.” 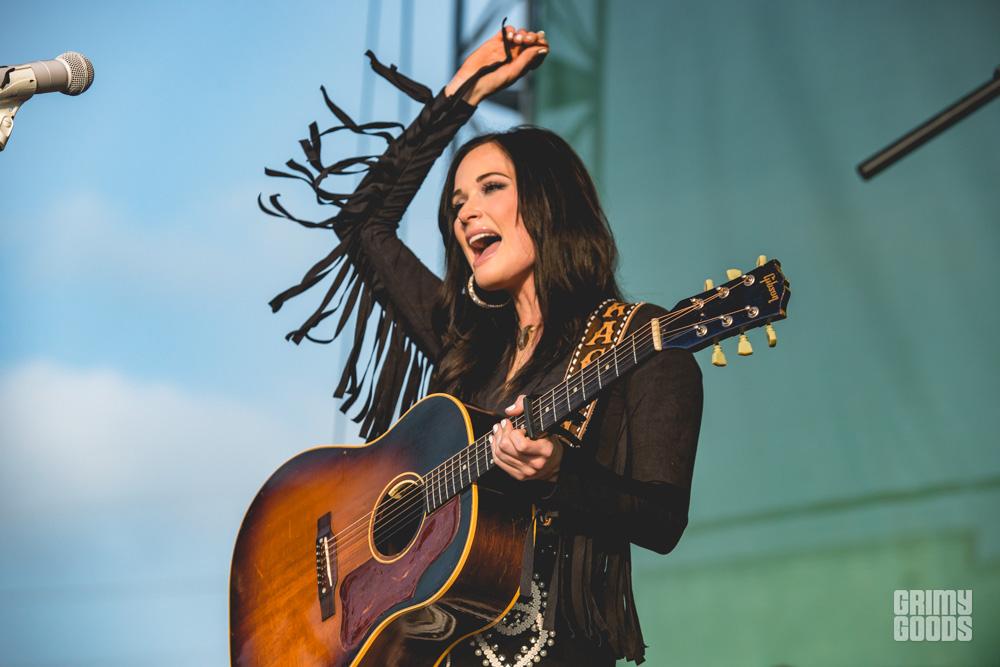 Over at Stubb’s, I caught the enigmatic Charles Bradley and His Extraordinaires at the NPR Music showcase. Bradley never ceases to give me goosebumps. He’s a helluva performer and he brought the heat with him. Crowd favorite “The World (Is Going Up In Flames)” had the crowd moving. What makes Bradley stand out is his story and he’s an inspiration for pursuing your dreams no matter how old you are.

“If I can’t sing from the heart, then I won’t sing at all,” Bradley said late in his set. It’s clear he’s got a heart full of good tunes and we were blessed to get to hear some of them.

After catching his set, I bopped over to the Pandora Discovery Den for a few brief moments of MSTR RGRS. I wasn’t familiar, but it’s apparently the project of Jarred Rogers, who’s had a part in some hits by Charli XCX, Lana Del Rey and Demi Lovato. The set was pretty fun, with remixes of Smashing Pumpkins and Radiohead mixed in with some more current mainstream samples.

Up next was HAELOS, a band we’ve tabbed for a breakout year and a must-see Coachella undercard. We saw their LA debut opening for Miguel at Bardot earlier this year and it’s clear their down-tempo electronic tunes will catch on quickly out here. They drop their debut album Full Circle on Friday on Matador Records, and those that got a preview Wednesday at SXSW were treated.

I ran over to the Mohawk for House of VANS and caught the tail-end of Spanish lo-fi garage rockers HINDS, who are as busy as anyone at SXSW this year with 17 showcases scheduled. After missing them last year I finally got to see them live and they are quite the party on stage. Their set-closing cover of “Davey Crockett” had everybody dancing. They headline the Echoplex on April 1 and shouldn’t be missed. 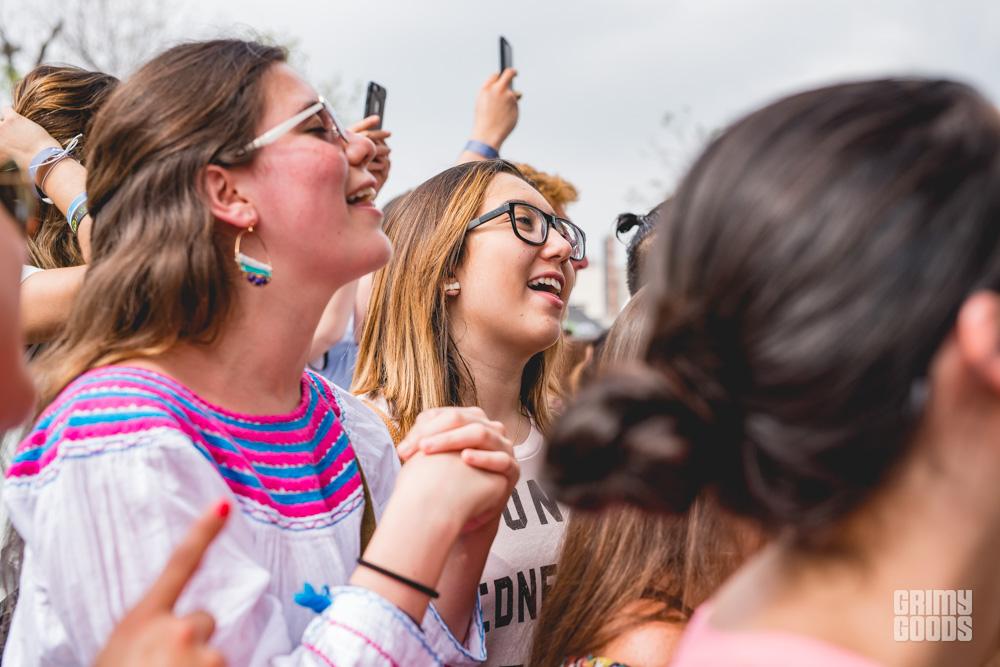 Up after HINDS was down-tempo R&B act Kelela. If you’re a fan of BANKS, Kelela should be right up your alley. Her sexy jams had the crowd vibing, and she really knew how to work it with her impressive and expansive vocal prowess. She cancelled a date in LA about a year ago to focus on new music, and if her set was any indication, the new tunes were well worth the wait. She shined on the stage.

Afterwards I ran back over to Stubb’s to catch rising rapper Anderson .Paak‘s set at the NPR Music showcase. He’s a rapper that I’ve been highly interested in seeing since his album Malibu dropped this year — an early 2016 favorite of mine. He brought his band The Free Nationals with him, but he first kicked things off solo with favorite “The Waters.” He really sounds just as good if not better live than on record and when can you remember seeing a rapper jump on the drum kit and rap simultaneously?

His stuff and his vibe is reminiscent of Common during the portion of his career he recorded Be, one of my favorite hip-hop albums of all-time. Paak brought it big time and his band weren’t slouches either. He closed with “Suede,” which he preceded by saying sometimes he just likes to talk shit and this was his big shit talk song. It was a good way to end his set.

The last thing I caught was buzzing singer-songwriter Julien Baker over at Central Presbyterian Church, a perfect match between musical act and venue if there ever was one. Baker stood on stage solo with her electric guitar and broke everyone’s hearts with songs from her debut album Sprained Ankle. The room was completely silent and erupted in applause at every meek “thank you” offered up by Baker in between songs. She was also very funny with her banter.

“Everybody Does” and set-closing “Something” were the standout moments from a highlight-filled set. At the end, she got a much-deserved standing ovation from the entire crowd. It was the perfect mellow moment to end Wednesday’s slate of action on. Another tightly-packed day coming up with Thursday’s offerings. 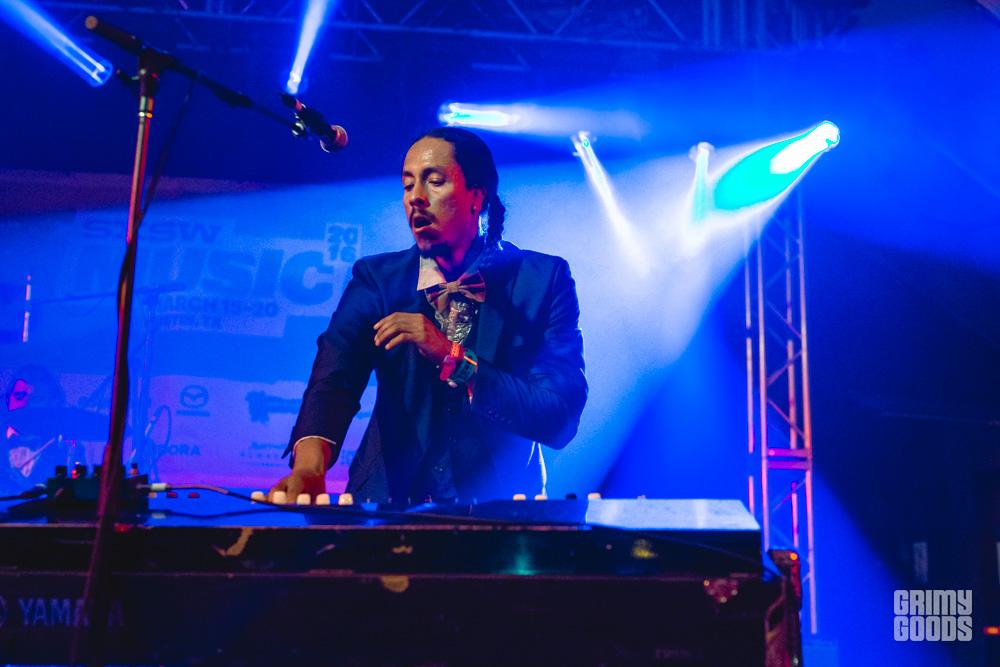 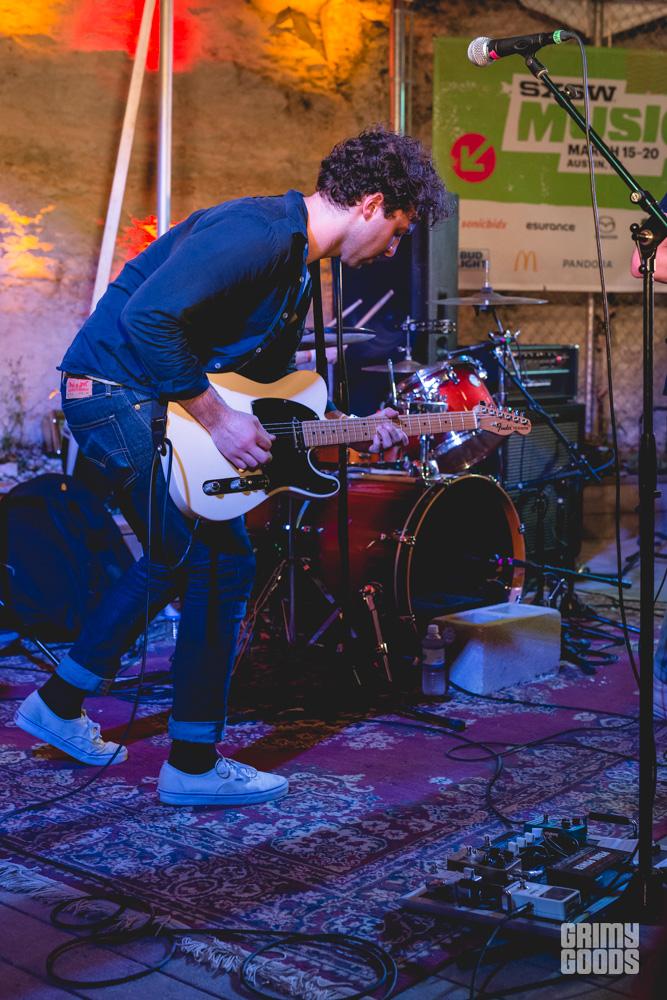 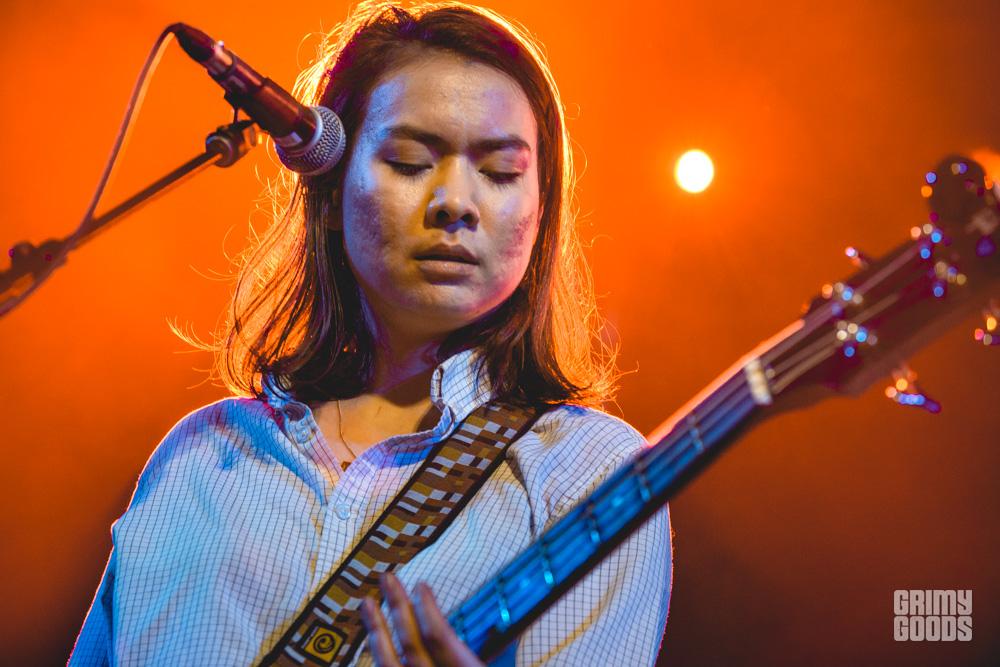 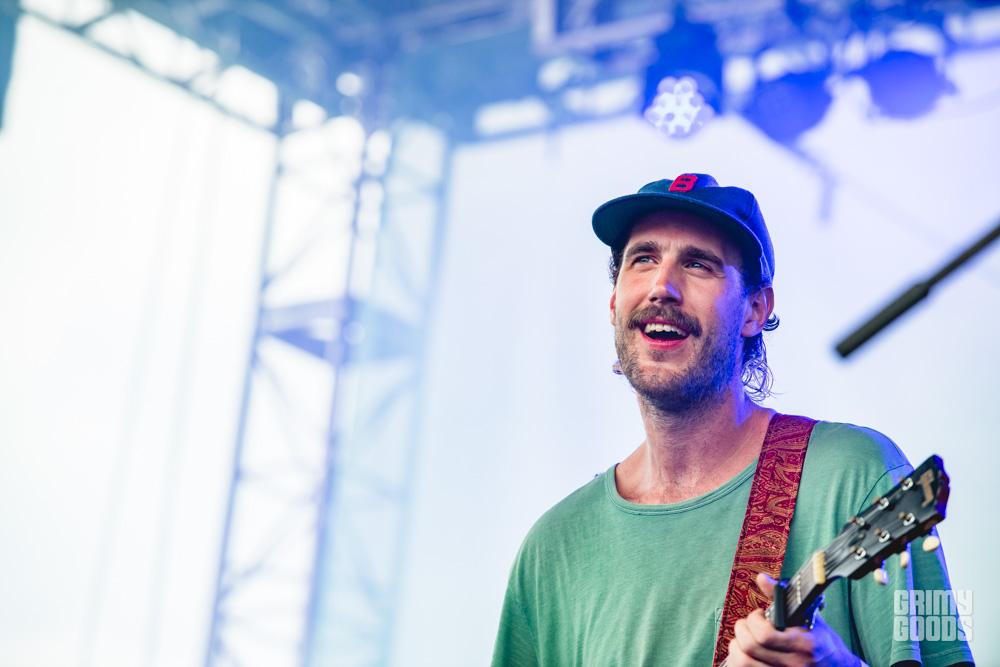 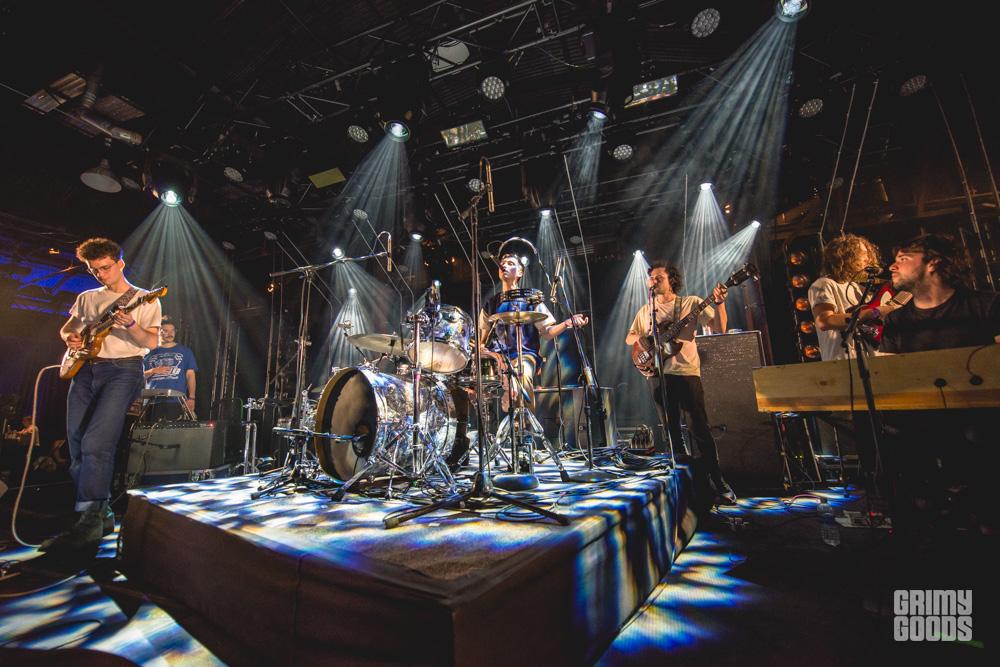 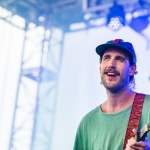 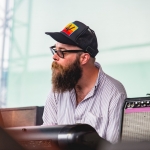 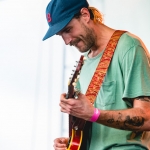 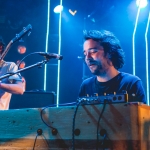 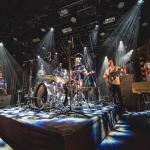 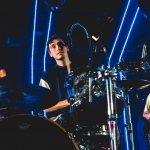