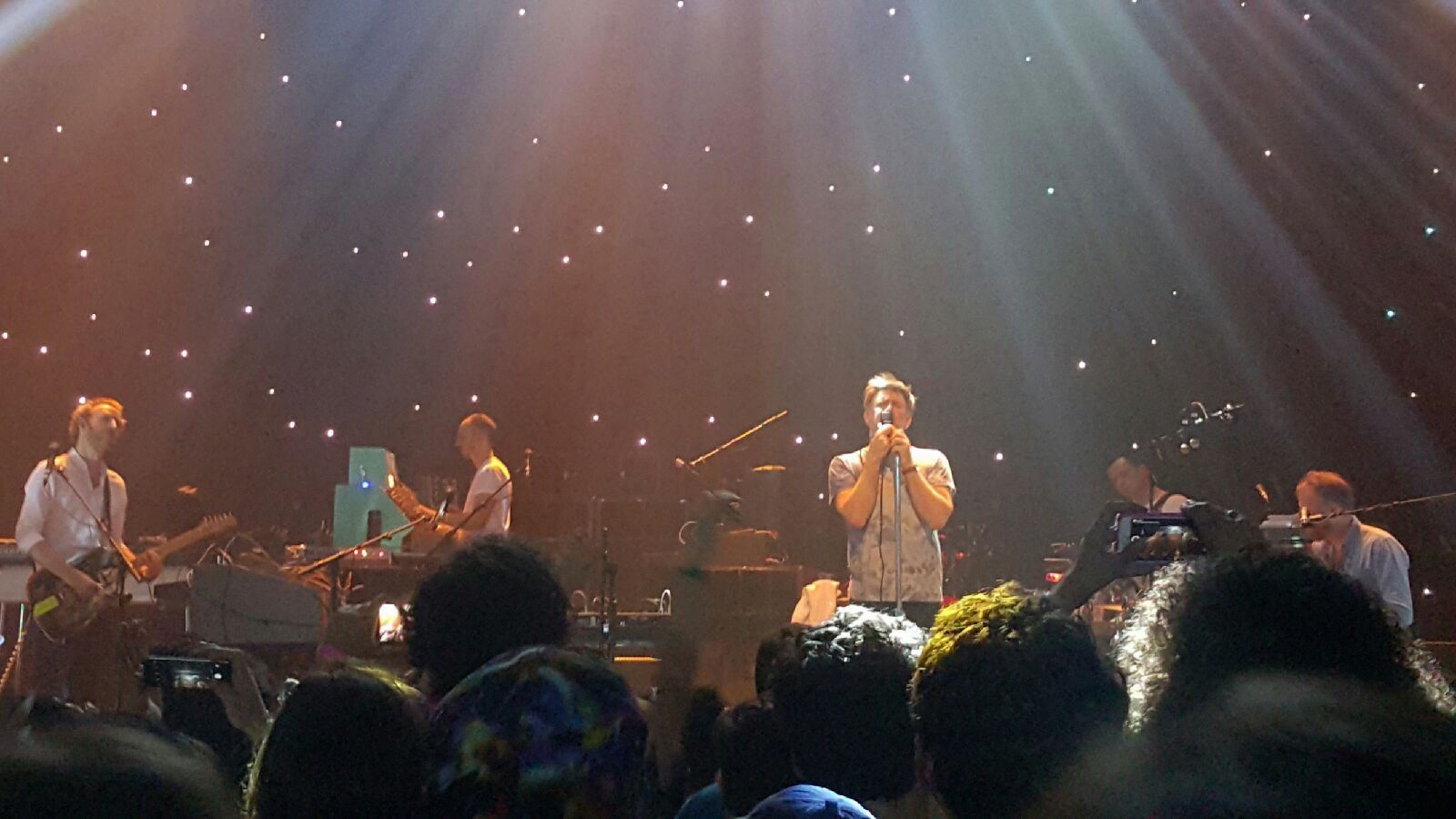 I had never seen LCD Soundsystem perform before seeing them Monday night at the Fox Theater in Pomona. In fact, the band didn’t even really come onto my radar until 2007, 2008ish after graduating high school. But on Saturday, I was lined up in front of Amoeba Records in the rain to buy two tickets to their show, a full three hours before the record store opened.

I wasn’t a superfan of James Murphy and his electro-rock group, so why did I go to all this trouble? For one, many of my best friends whose musical taste I respect are big LCD Soundsystem fans. I was also much too broke to ever see them around the time I got into them, being a freelance sports writer with no connections to free concert tickets at the time. When the opportunity presents itself to see a band of that caliber in a small to medium sized venue, always take it. This might be the last chance I ever get to see this band in a venue smaller than 5,000 capacity, who knows?

The Fox Theater in Pomona is similar to The Wiltern in Los Angeles, in that you have to get there early if you want to get a wristband that will allow you into the pit. The sight lines from the back of the floor aren’t the best by any stretch, so we got there an hour and a half before doors opened in the hopes we could get those coveted pit wristbands. Thankfully, it was plenty of time — enough for us to kill a flask of whiskey and eat some bad Mexican food too.

The music that played for the two hours between doors opening and LCD Soundsystem taking the stage was pretty damn good. It was very dancey and revved up the crowd as the anticipation grew to a high level. From the pit to the balcony, fans were already getting the party started. The vibe in the room was an intense plume of positiivity. Everyone was here to dance and have a good time; and judging by the potent smiles across fans’ faces, the good times were flowing nice and strong. When James Murphy and the rest of his large band took the stage, the cheers were loud and joyous. We were ready.

They wasted no time. Kicking off with “Us vs. Them” where LCD’s signature disco ball (seen on the cover of their debut LP) made its radiant appearance, fans went wild jumping with joy. Within the first handful of songs, they played “Daft Punk is Playing at My House” and “I Can Change,” two favorites of fans hardcore and casual. The energy in the pit was so great. Almost everyone in the building sang along to Murphy’s infectious hooks.

The slow build in many of those LCD songs are a big part of what makes their live show so incredible. It’s like that movie The Departed — where all that plot builds to (SPOILER ALERT) everyone getting shot to bits unexpectedly in the film’s final 10 minutes. The song “Yeah” is a perfect example. Murphy’s vocals start out unassuming enough, but by the latter portion of the song he’s screaming like he’s Trent Reznor of Nine Inch Nails. Your energy levels can’t help but rise. 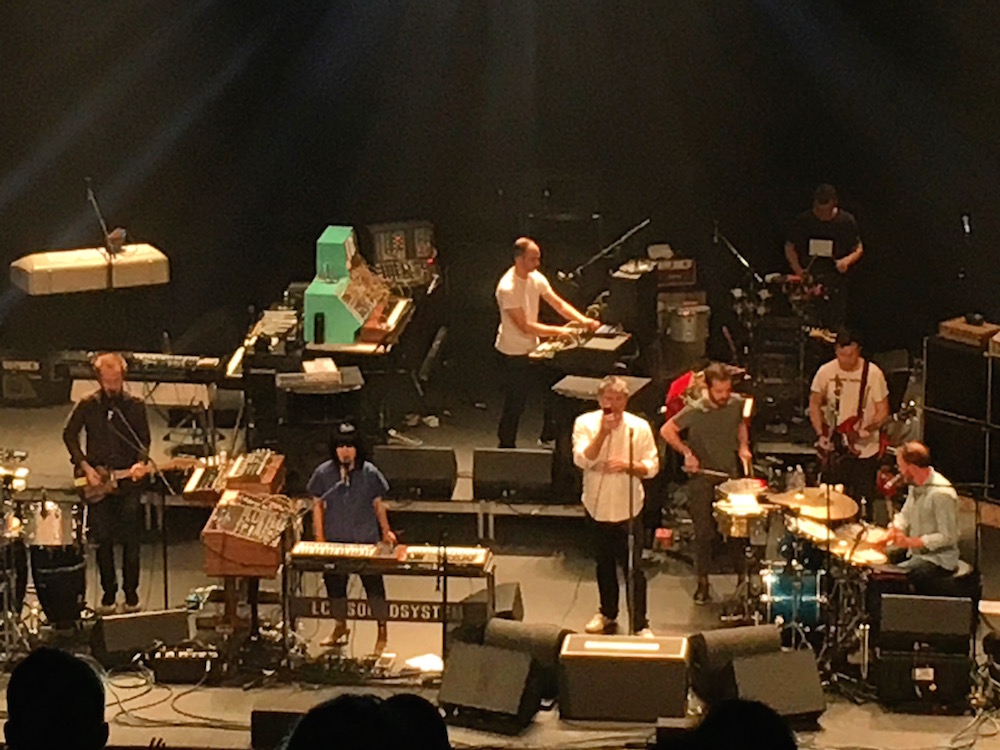 Towards the latter part of the set came “Losing My Edge” and “Home” back-to-back. Those are two of my favorites. It’s absolutely incredible how many seven-plus minute epics that Murphy and his band have crafted over the years. When that first “ahhhh” moment hits in “Home” halfway, most of the crowd had their hands outstretched towards the sky, myself included.

The three-song encore of “Dance Yrself Clean,” “Yr City is a Sucker” and “All My Friends” was one of the best encores I’ve seen in years. Smiles were everywhere. It’s clear that they have re-taken their position as one of the biggest dance-punk bands in the world, and rightfully so. Seeing this group of people on stage — all of whom on the street you might mistake for lawyers, librarians etc., makes you realize that anyone can be a rock star if you can just deliver the killer tunes. James Murphy looks like a guy who came to the stage from picking up his kid from daycare but he’s a fucking ROCK STAR. If there’s anything more bad ass than that, I can’t think of it.

I posted on Facebook after the show that it’s going to be hard to top for the best show I see all year. A friend responded, “What makes them so good?” I’ll include the same simple answer here that I put there: My legs hurt from dancing so much and my face hurts from smiling for two hours. Or as our editor mentioned, “There was never a dull moment. Even with a torn ligament on the mend, I refused to sit in my balcony seat. I stood and danced the entire fucking time.”

I wasn’t an LCD Soundsystem super-fan before Monday night, but that has all changed. This is maybe the best thing about them reuniting after five years. Those of us that thought we missed the boat on getting to experience the joy and heartbreak of hearing “All of My Friends” in a sea of your pals get a shot at redemption. And how sweet that redemption tasted.