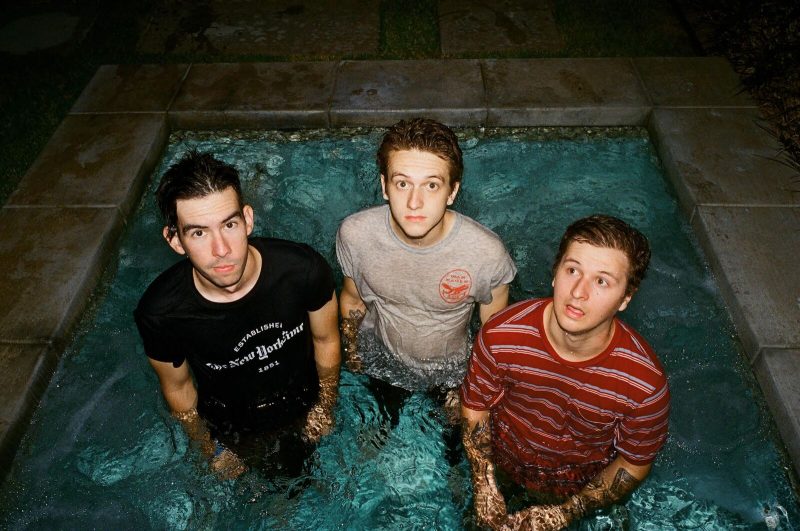 San Diego surf-punks, The Frights, show off their playful charm in a new live video for their sweet single “Afraid of the Dark.” Shot at Dangerbird Records in Silver Lake —not only known for their excellent roster, but bangin’ parties — The Frights take you through a quirky tour of Dangerbird Records while busting out a live performance, a few skate tricks and some pizza chomps. Who doesn’t love all that?

A catchy and sweet tune, perfect for summer, “Afraid of the Dark” actually has a bit of a daunting background, but something many can all relate to.

“I have a pretty intense fear of dying,” reveals Mikey Carnevale. “Although, I think that’s something I think a lot of people have in some way or another. It just freaks me out not knowing what the fuck happens when you stop breathing. “Afraid of The Dark” is about losing my Grandma when I was 13 and now trying to come to terms with the fact that I’m going to die someday and that’s ok. My mom loves this song.”

“Afraid of the Dark” is one of 10 tracks of The Frights’ Dangerbird Records debut, You Are Going To Hate This. The album was released this past February and you can purchase it and / or stream it here.

If you watch the video through the end, you’ll get a peek at Dangerbird Records’ thrilling mystery room: “That’s the thing about this place, it’s kind of mysterious, it’s kind of whacky, and that’s why I like it.” This room is not recommended for those “Afraid of the Dark.”

The Frights have a hefty summer and fall run of tour dates ahead of them. The band is about to hit the road for a headline tour with Hunny, followed by a supporting spot with Fidlar. Additionally, The Frights are also slated to perform at this year’s Echo Park Rising as part of the official kick-off party. Check out the full list of tour dates below and catch The Frights in Los Angeles or at a city near you.

THE FRIGHTS TOUR DATES WITH HUNNY

One thought on “Video Premiere: Watch The Frights perform “Afraid of The Dark” while exploring fun and mystery at Dangerbird Records”