“Tonight isn’t about Donald Trump; tonight is about supporting organizations like the ACLU and Planned Parenthood,” Nikki Monninger, the soft crooning bassist for the Silversun Pickups, couldn’t have nailed it more poignantly when she responded to a fan that screamed “Fuck Trump.”

With little under a week left before the U.S. would receive its next President, it’s hard not to ignore the well-placed sentiments of derision that had been building in response to Trump’s rampant participation and inspiration for sexism, racism, xenophobia, childish bullying techniques, and countless other backwards policies. Since his election, there has been a rallying towards groups like the ACLU and Planned Parenthood, organizations that many believe we will need even more during the next four years, as Trump and his supporters begin their trampling of basic civil rights and a Republican Congress begins its attempts to remove federal funding from Planned Parenthood. But despite all the anger, disbelief, and fear that continues to hang since November’s election, Saturday wasn’t about Trump–it was about the people left standing that wouldn’t allow the words or actions of a demagogue to hold sway over their lives.

Love Trumps Hate–a phrase that has become a challenge towards the incoming President-elect and his supporters–kicked off at the Bootleg Theater for a sold-out night for the benefit of the ACLU and Planned Parenthood, and featured a wide array of musical talents and silent auction, with proceeds going to both groups.

The night began in spectacular fashion, with the Death Cab for Cutie cover band Expo 86 recreating the rivetingly melancholic howls of Ben Gibbard inside the Bar Stage of the Bootleg Theater. As packed as the venue has ever been, there was something delightfully flustering about hearing a room full of people hum along to “Soul Meets Body,” while a Bob Ross lookalike (he sang as well as Bob painted, for sure) serenaded the crowd awash in the song’s tentative hopefulness.

Ever the venue to not be outdone in the area of having the best opening acts, dance rockers Bloodboy stomped their way onto the Bar Stage, led by Karen O reincarnate Lexie Papillion. With vocals that punch, bite, and kick with every one of her harsh shouts, Papillion and company wildly balance sheer insanity with lyrical beauty. Her shouts and howls are deliriously uplifting, and seeing the wild eyed singer twirl madly onstage in heels and a white lace dress left you wondering why the hell you weren’t doing the same. If Bloodboy wasn’t on your radar before (she was included on Grimy Goods’ Artists on The Rise forecast for 2017), they should be now. Bloodboy are going to be one of the biggest emerging names in indie-rock by the end of 2017.

Over within the quaint intimacies of the Theater Stage, singer/songwriter Nick Waterhouse brought the heartrending tunes to the ever-growing crowd that was shuffling its way into the Bootleg throughout the night. The first of two acoustic sets that would be taking place that night, Waterhouse and his makeshift band brought the camaraderie by the bucket-loads as the crowd commiserated in joyful agony alongside his soulful lulls.

Taking the tempo of the night, crumpling into a ball, lighting it on fire, and then sending it rocketing into outer-space, James Supercave brought his danceable indie-rock portfolio to the Bootleg as the Theater Stage was filled to the brim with people shaking their bodies to his crazed compositions. With a croon that burned just as brightly and pierced just as deeply as the neon lights that lit him up, Supercave was the breakout performer of the night, channeling bits of REM and LCD Soundsystem, not just in sound and sonics, but in the unconfined passions of his live presence. Thirty-minutes was a criminal amount of time to be left with Supercave, but it was enough to get a taste for the prodigy’s excessive array of talents as he hypnotized the crowd with his helium crooning.

Eventually, the night’s main event was upon the crowd, and as the Bootleg prepped itself emotionally for Silversun Pickups’ acoustic set, it was hard to forget that this was their first show in-or-around Silver Lake in some time. With the nostalgia already building to a feverish boiling point and the Theatre stage overflowing with people trying to get as close as possible to the two empty stools that sat on the stage, Brian Aubert and Monninger walked out to the tune of at least a hundred people screaming their names. The passionate greeting was well placed, and the two singers gave the crowd a show that could almost only be considered acoustic in form, as the strong vocals of Aubert did their own shredding throughout the night. It might’ve taken a few years for Silversun to file down their sound to what it is today, but they’ve had their live show honed down to perfection ever since they started playing bars in Silver Lake all those years ago–and it shows every time. Whether at a large festival or in a bar in their hometown, Aubert and Monninger keep the intimacy voraciously unforgettable, leaving you feeling like you just got a private show from one of indie-rocks’ biggest heroes.

To put it frankly, Aubert is dually a raging locomotive of passion, and also a humorously adorable man who never takes himself too seriously. Making eyes at the crowd, interacting with them in anyway he could, even posing for a cell phone video a fan was taking; when Aubert wasn’t ripping through the tried riffs of “Lazy Eye” or “Panic Switch” (a song Aubert, given the current Republican President-elect, ironically recalled with some fondness being used by Mitt Romney).

Monninger is the exact opposite; she’s quiet and poised, except for when her bass is giving life to the band’s cathartic melodies or she’s treating the crowd to her euphonious murmurs on songs like “Circadian Rhythm (Last Dance).” It was during one of the band’s brief breaks in their set that Aubert took the time to emphasize the night’s purpose–that was when an enthusiastic fan shouted “Fuck Trump,” and proceeded to lambast his associates and family. Aubert waved the fan off and told the crowd, “Trump who? That guy on t.v.? He seems kinda funny” Aubert’s lightheartedness was not without its biting sarcasm, but he had a point. Monninger brought that point home in explaining to the crowd that the night, as the event’s title says, is not about Trump, but of the very real and tangible love we have for each other as people triumphing over all the terrible things our President-elect embodies and represents–not the man himself; the man himself is just a distraction. 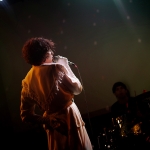 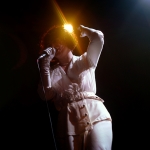 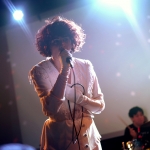 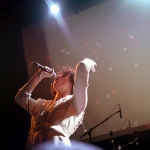 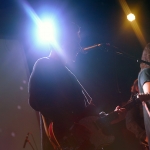 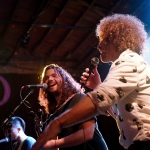 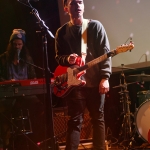 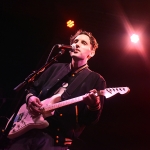 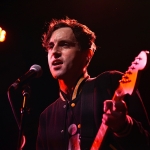 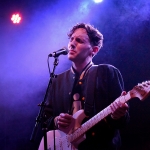 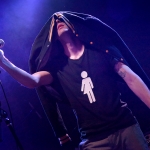 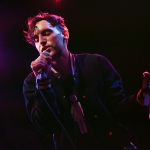 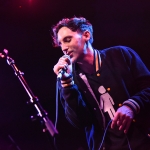 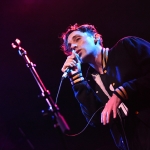 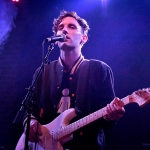 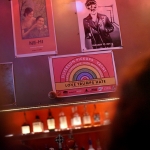 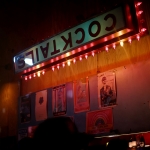 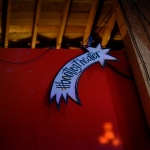 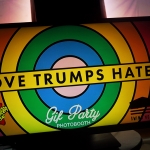 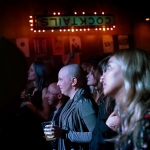