The day Brett Kavanaugh was confirmed to the Supreme Court, I did something I hadn’t done in a long time. I blasted Bikini Kill’s “Resist Psychic Death” on repeat to combat the overwhelmingly sharp pain that periodically breaks through the numbing despair of our post-Obama news cycle. Driving down Silver Lake Boulevard screaming at the top of my lungs, “I’ll resist with every inch and every breath!” I passed by a woman putting up handmade “Fuck Kavanaugh” posters and suddenly I was grinning from ear-to-ear as I shouted out the window, “Thank you!”

Entering the Palladium Friday night I felt that same smile plastered on my face. The vibe was unapologetically joyous. There were impromptu reunions with decades old friends from across the country. There were young girls in tow with their parents. The excitement and anticipation for Bikini Kill’s unexpected, yet perfectly timed, reunion was palpable.

As soon as the familiar drumbeat of “This Is Not a Test” began, the crowd erupted into an ecstatic punk dance party. Followed by “Don’t Need You,” it was clear this reunion was staying true to its roots. “It looks like you’re all doing a really good job on girls to the front,” Kathleen Hanna proclaimed referencing her famous directive from riot grrrl shows in the hostile, male-dominated punk scene of the early 1990s. “Girls to the front! Girls to the front!” the audience now chanted gleefully in a venue packed with thousands of adoring fans.

Our Bikini Kill records may not have been in heavy rotation since the pre-internet days of burgeoning underground girl power movements, but the lyrics are forever ingrained in our psyches. The cathartic chorus of voices shouting, “What have you taught me? Nothing. Look at what you’ve taught me. Your world has taught me nothing!” nearly drowned out the band during “Feels Blind.”

“There are a lot of people who haven’t seen us before,” Tobi Vail said after her performance of “I Hate Danger” as she dedicated “In Accordance to Natural Law” to “all the kids who mail order our records.” I was once one of those kids. By the time I was regularly attending punk shows, Bikini Kill had broken up. I had everything they ever released, bootleg VHS recordings of live shows, zines, photos, and any other scrap of memorabilia I could get my hands on. The images and sounds of Kathleen Hanna, Tobi Vail, and Kathi Wilcox on stage together were a hazy dream in my mind for over twenty years until this night and they delivered beyond anything I could have ever imagined.

When you hear the words “reunion tour” there is always the underlying fear that this time around there will be something missing or contrived in an attempt to regain the magic of years past, but not tonight. Their energy, sound, and style were all effortlessly true to form and complimented by new guitarist Erica Dawn Lyle.

“It’s really nice to see people pogoing to feminist art,” Hanna said as she took the mic after Vail’s performance of “Tell Me So.” “If this was a Carnival cruise ship, we’d be in the bottom of the ocean right now.”

At one point, Hanna belted out the chorus of Olivia Newton-John’s 1980 hit “Magic” from the film “Xanadu.” “You have to believe we are magic,” she sang with her signature sense of humor reimagining, as she so often does, an otherwise benign pop culture artifact. “I’ve been thinking about how one of the only things [we have] right now, in these troubled times, is that the assholes don’t believe in magic,” she told the audience. An improbably rosy proclamationpunctuated by a raucous rendition of “Resist Psychic Death.”

“Rebel Girl,” the ultimate riot grrrl anthem and tribute to the power of slumber party sisterhood, came towards the end of the show and it felt as if the entire crowd had been shot out of a cannon. The room was vibrating with pure positivity and love. “Do you even know how fun this is? This is so fun!” Hanna observed in her playful valley girl accent. “I actually for really, really real am having fun.”

The lyrics of Bikini Kill’s songs may be heavy, but the mood was refreshingly light. We laughed, we danced, we sang along with every word, we surrendered to the sweaty swaying pit, lost ourselves to an altered state of buoyant oneness and exploding joy. “I Like Fucking” wasn’t on the set list, but gazing out at the vast sea of euphoric bodies basking in the glow of revolution girl style now all I could think was, “I believe in the radical possibilities of pleasure, babe. I do. I do. I do.” 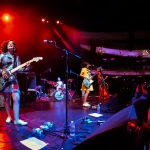 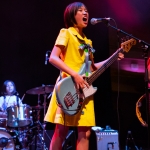 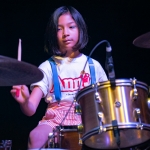 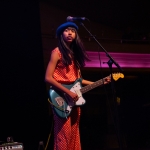 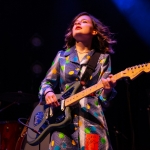 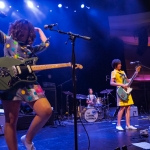 Encore:
Double Dare Ya
Suck My Left One