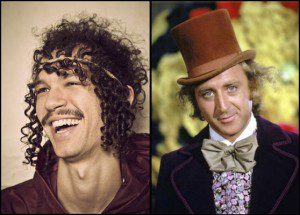 “My dear friends, you’re now about to enter the nerve center to the entire Wonka Factory. Inside this room all of my dreams become realities and some of my realities become dreams…”

The corky, hip-hop-indie-pop geek, Darwin Deez is at again, this time with a very unique spin with his latest (free) mixtape, Wonky Beats—a collection of samples from one of the best movies ever made, Willy Wonka & The Chocolate Factory (well, at least in my opinion) fused with lyrical nonsense with hard-hitting beats. To make things more interesting the mixtape also features appearances from fellow hip-hop head friends like Das Racist, Chiddy Bang, Dev Hynes and KOOL AD.

The “Intro” perfectly guides you through a soulful journey of what to expect from the rest of the mixtape, as it samples some of the movie’s best lines, preparing you for the type of musical fun that the following 12 tracks (and two bonuses) will provide.

Tracks like “Where’s the Chocolate (ft. KOOL AD and Dast Racist),” and “I don’t like the Look (Remix),” feature bass-filled, throw back hip-hop beats that will keep ya head nodding in unison, while others provide a more low key feel, allowing you to kick back and appreciate the sampled melodies from the 1971’s film under bizarre, usually tangent-based, lyrics that make for very colorful subject matter.

“Pure Imagination Part 2” and “I Want to Party_10,000 Tons” are two of the most interesting tracks on the mixtape. The first starts with Gene Wilder’s notorious melody everyone remembers from the scene where the kids are first introduced to the center’s candy-filled forest. Then drops a chipmunk-voiced sample from the original song before Deez starts his belligerent run-ons about some pretty ass random stuff. Still, it’s enjoyable to figure out how each of the verses connect with the next, like figuring out how “chillin’ with Tila Tequila,” “thirty seconds to a Mars bar,” and “listening to Vampire Weekend with a gay punk” all relate to each other. At the end of the song, you’re pretty much laughing at all the random shit he says.

“I Want to Party_10,000 Tons” features the naughty Vercua Salt’s jingle that Deez so humorously throws in lyrical references to nuts (which, in the children’s book—not the movie—leads to her demise due the fascination with acquiring a nutshell-breaking squirrel). Leave it to the witty and satirical Deez to know his Roald Dahl.

Wonky Beats is a perfect example of how music and art go hand-in-hand, with Deez the Salvador Dali of nonsensical hip-hop/pop/indie or whatever other genre you think his anything but boxed music depicts. If you’re craving more sweet streets from Deez, make sure to cop his debut record, which was already released overseas, but gets a US release on February 22 via Lucky Number.

Wondering what’s going through the musical Candy Man’s imagination to dream up such a scrumptious concept? Well here’s what Deez described about the method to his Wonka madness straight from the label’s site:

“It’s a high concept mix-tape, tailor-made for multi-generational impact, created exclusively from Willy Wonka samples with the songs all derived from/based on the original 1971 score. It’s like the Grey album but with Chocolate. Inspired by Das Rascist’s “you oughta know” lazily singing along with the choruses. chunky as hell beats. The film is a great allegory. I never knew it was allegorical until a stoner pointed that out to me though. I just always loved the songs. Really special melodies (cheer up charlie) and chords (pure imagination). Thought they’d make good hip hop choruses. Why limit yourself to Willy Wonka samples? Limitations inspire me. Limitations give me the freedom to feel ok about whatever comes out because I can always blame the limitations. But the secret is to get the faucet running in the first place. Otherwise I am just too serious and too scared to write anything. But this particular limitation also has the power to make people curious, like the Grey album, which is all it takes in this day and age to make a popular record; and potential popularity is always thrilling, never daunting. It’s the writing itself, the impossibly high quality standards I carry around in my brain that make me scared to write. Not the idea of other people listening in. I WANT people to listen in. The rap style is like a brain dump (which is the technical definition of surrealism. “Why a mix-tape?” – albums are to mix-tapes as the news is to gossip. They will change the way you hear the songs in the movie forever!” 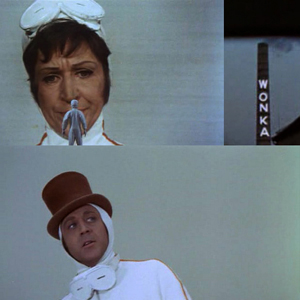