“Fuck you, you motherfucker!”

If this kind of melodrama is your normal speed, then I think you’re going to find Apparat’s new release, The Devil’s Walk pretty boring. This is a subtle record. So subtle in fact, last night a music-loving friend and I drove from K-Town to Hollywood with it playing the whole time and never noticed it was on. But subtle isn’t pejorative, it just means this is not for the casual or uninvited listener. This is one of those “get out what you put in” records.

So, for a little back story on The Devil’s Walk, Sascha Ring, aka Apparat — is veteran electronic musician – the early 2000s, Ring was a popular German techno DJ. In 2004, he appeared at a John Peel session, he started moving away from dancefloor music and more into an ambient and modern classical direction. He collaborated with Ellen Allien in 2003 on the album Berlinette, and again in 2006 on the album Orchestra of Bubbles. In 2009, he released the Moderat collaboration with fellow Berliners Modeselektor (Moderat even opened for indie godfathers Radiohead). In April 2009, he received the Qwartz 5 Artist of the Year award and in 2011, he signed with the super-respected Mute Records label (M83 labelmates) — where over the summer, he released The Devil’s Walk. Ring’s newest work is MUCH more melodic and actually has vocals on every song. Ring is certainly no trained singer, but he is clearly a master sound manipulator and his songs often close the gap between electronic, ambient, classical and pop music.

Now in Ring’s favor, 2011 has been the year of the DJ-turned-pop-singer; SBTRKT, Frank Ocean and of course, James Blake have been all over indie press and itunes playlists and Apparat fits in nicely with that group. Though many tones here are synthetic in nature and would not sound out of place in a club, the beats/samples are manipulated not unlike the way a violinist might finger a fretboard. Ring has crafted a makeout, dancefloor, chillout record with tunes — talent is dipping off this thing. But some times with talent, there can be some drawbacks and this record has two, albeit small ones.

Sometimes talented people need to show you how talented they are by being overly diverse. That sometimes makes for a “greatest hits” kind of feel. That may not bother some, and more power to you — the other small-ish I had with The Devil’s Walk was that sometimes the lyrics were a little too Coldplay/I’m-trying-in-this-big-world-and-it’s-overwhelming. I should really cut some slack – dude’s not a native English speaker but his sometimes over-emotive voice singing over plaintiff lyrics were a little too much. That being said, the rest of this release is pretty astounding. Obviously, Ring is a trained orchestrator because often his ambient tones work like neo-classical string arrangements. Key track “Song of Los” starts out with an almost silence and builds up so subtly, it’s hard to notice individual changes. Like most tracks, Ring sings more than capably and with a bit of emoting and of course the chorus breaks your heart. My favorite track is the final cut ”Your House is My World,” which repeats the same melody line over a minimal track of tense faux strings and faux tympanis to maximum effect and then breaks down to just once voice. It’s pretty beautiful.

Over all I really like The Devil’s Walk and the things that weren’t my cup of tea actually might enhance its appeal to others.  As the Hold Steady once said “Most people are DJs” and 2011 is a strong year for DJs who now sing. 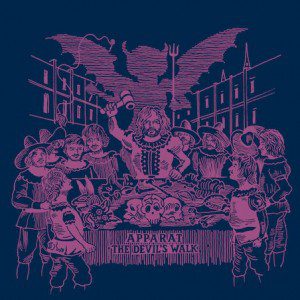