It amazed me that this petite and adorable girl on stage at the Echo, performing with ultimate swagger was 23 years old. At first glance, the Canadian Montreal-based musician—Grimes (Claire Boucher) looks as young and lively as a 15-year-old girl. She has a sweet face and appears almost chipmunk-like as her ears poke out of her long hair with a dope little RSWD beanie riding on her dome. Draped in a camo-jacket (10 times too big) over a cute set of tights and floral skirt, it isn’t but until one song that Grimes opts to kick off her heels for the remainder of her show. She’s all smiles with an enchanting yet spunky stage-presence that her fans cant’ help but eat up. Like the last chocolate in a box of See’s Candy, Grimes is a tantalizing treat that fans couldn’t help but devour.

Influenced by multiple genres like R&B, hip-hop, goth, industrial and more—Grimes creates provocative  music that shatters musical boundaries and leaves listeners begging for more. With tracks noted for simple, but strong percussion, intense vocals and highly addictive melodies—Grimes may have gotten into the electro game a bit later than most artists, but she’s more than making up for it with her vibrating shows that encompass both musical and visual elements. This girl is straight dope and stands out above the rest.

The Echo was extremely packed and the musky smell of bad breath and body odor only reaffirmed how packed this place was. Halfway through Grimes set, I moved to the back of the Echo for a bit more fresh air as I began to get flustered by the unusual orders protruding from the dance floor. But aside from the hot sweat and unpleasant scents, Grimes made it just about unrecognizable with her astounding performance.

Alternating between two keyboards while taking the mic to mesmerize us with her adoring vocals, Grimes still exuded some badass flair. The lil songstress had a PBR tall boy in hand through out her performance as her posse on stage behind her, hyped the lil lady up with their support. I think one of the guys on stage was a proud older brother.

Grimes played about an hour set from beat-throbbing numbers all the way to a soft and delicate ballad that closed her performance. Although each song touched the musical G-spots of the fans, “Vanessa” really shook the crowd up into a flirty frenzy. Grimes is an extremely talented and diverse lil lady with a great balance of flavor in all her tracks. Her carefree spirit is as real as it gets, with no buffers. Sweet and sassy with a nice serving of grime, Claire Boucher keeps it grimy and that’s one of the reasons why we dig her so much. She don’t fake the funk.

Grimes third studio album, Visions, was just released on Jan. 31. The album is her first 4AD release. Pick up her new album, Visions, here. For more info on Grimes and tour dates, visit her Website.

Supporting Grimes at the Echo were Born Gold and Lady Tragik. Both bands put on a stellar and eventful performance. A lot of engaging stage presence and bombastic beats coming from the two supporting acts. Both performers made me feel like I was at a rave, which I don’t quite like that idea—but they were a sure treat of amazement. Born Gold really turned up the theatrical art-rock sugarcoated with explosive beats. These guys were mesmerizing. We got some great photos of Born Gold and Lady Tragik. Check them out in the photo gallery below. 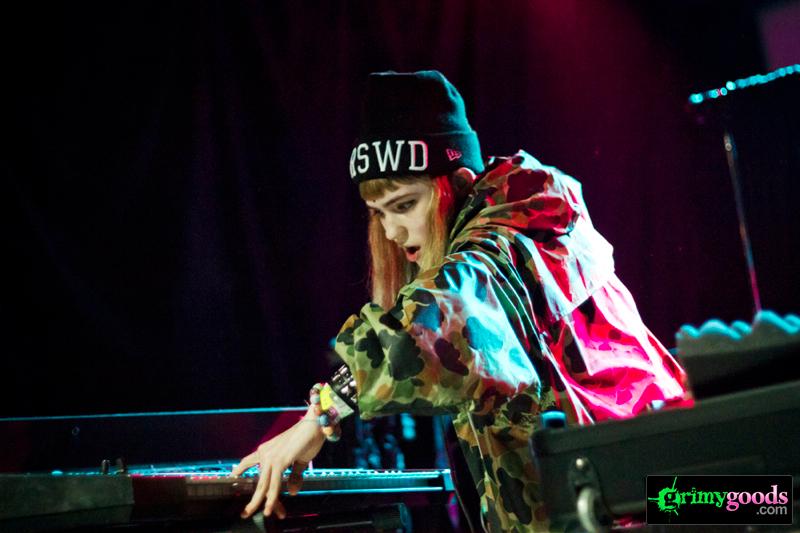 Click through the photo gallery below for more photos of Grimes!