Ah, Austin. It’s good to be back inside your town for South by Southwest (SXSW), and you really knew how to officially kick off the music portion of your epic city-wide festival, didn’t you? We got around quite a bit, and it’s only the beginning. Be sure to check in on our daily coverage if you want to get some insight into what you’re missing, or if you just want to relive some of the key moments.

First, things got started at Spotify House, which is pretty far tucked away from where most of the action is downtown. I checked it out the day before and caught impressive sets from Miguel and Lucius (please check out their new album Good Grief that just dropped March 11), getting a bit sunburnt in the process.

This time, the first act we caught was Kacy Hill, a singer I knew nothing about but later came to find that she’s based in Los Angeles and she was signed to Kanye West’s GOOD Music label after serving as a backup dancer on his Yeezus tour before getting him a copy of some of her music. The former American Apparel model was impressive with her brief set and it fits right in with some of the popular down-tempo stuff out these days, like Jack Garratt (who’d be performing soon after).

We caught a little bit of South Korean future R&B act Dean on the smaller stage at Spotify House. After checking a bit of that out, I got a feel for the rest of the things going on in the event space. They were running mini home-run derby tournaments of MLB The Show 16 on Playstation 4 inside, and also had this dope jukebox that if you were wearing a band t-shirt, it would read it and play a song from that band. People huddled around a charging station that was inconveniently positioned away from both musical options. Free drinks flowed, when you first entered you were given a handful of drink tickets that were pretty useful.

Up next was Jack Garratt, who had just headlined the Fonda Theatre the previous Friday in LA. There were some sound issues with his set — as is the case with many SXSW showcases where soundcheck time is at a premium. He didn’t let it faze him too much and it’s easy to see why he’s gaining so much steam right about now. His live looping is on par if not better than down-tempo electronic contemporary Chet Faker, and his vocals are quite impressive.

Afterwards, I headed out to catch a favorite band of mine The Soft White Sixties. Recently relocated to LA from San Francisco, this five-piece is a classically-sounding rock band with lots of charisma. They started with an old favorite “Queen of the Press Club,” mixed in a cover of David Bowie’s “Suffragette City,” and threw in a handful of new tracks for good measure. My favorite was the set-closing “Miss Beverly.” Lead singer Octavio Genera made the most of the tiny stage they had at their disposal as he slid around like he was dancing on ice.

After changing up my accommodations for the rest of the week, I headed back downtown. Apparently, the big talk of the afternoon was Vince Staples’ set at Spotify House. He reportedly ripped Spotify at their own event, saying “Shoutout to Spotify, thank you for giving me this check to make up for what you’ve done to me and all my musical friends.” Staples was also reportedly not stoked at how one-toned the crowd seemed to be — but he better get used to playing to white people given the amount of festivals he’s slated to appear at this year. He’s poised to be one of the big stories of SXSW with the amount of high-profile showcases he’s performing at, but insulting someone writing you a check isn’t a good look to start — though I respect him for speaking his mind.

The last thing I got to check out was the closing party for SXSW Interactive. A lot of the people in town on Tuesday were there on their final day, whereas all the music people were just starting their SXSW journey. The event was a good place for these people to wrap up their week, with sets from Big Boi, St. Lucia, and a DJ set from everyone’s favorite one-hit wonder Biz Markie.

Biz Markie’s DJ set was just what the crowd was up for. It was basically Biz playing a bunch of favorite sing-alongs from the 80s to 90s. If you’ve been to karaoke, then you know what songs he played. “Bohemian Rhapsody.” “This Is How We Do It.” “Walk This Way.” He went through at least three dozen of everybody’s favorite choruses and people really dug it, though it was probably just Biz playing songs from his iTunes.

Up next was South African synthpop favorites St. Lucia, whom I had just seen Thursday at the Fonda Theatre but couldn’t help but check them out again. They played about 10 songs, with old favorites like “Closer Than This” and “Elevate” bookending songs from their new album Matter — like “Physical” and “Love Somebody.” Jean-Philip Grobler and his band brought the energy and the crowd responded in kind.

Big Boi might be one of the more fun rappers to see live. He had a killer live band backing him up, and Sir Lucious Left Foot joined him on stage to help with some of Andre 3000’s parts in OutKast favorites. And there were OutKast favorites aplenty, from “B.O.B.” to “Ms. Jackson” to “So Fresh, So Clean.” Big Boi even got a couple tracks in from his Big Grams sideproject with Phantogram, though they didn’t join him on stage.

Overall, it was a pretty booming first day of SXSW’s music portion and it’s only going to get meatier the closer we get to the weekend. We’re ready.

Big Boi at The Media Temple closing party at Stubbs 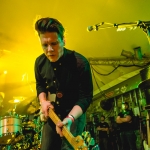 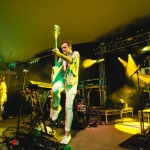