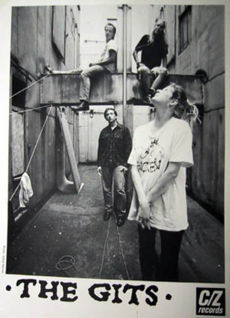 Ah, music and tragedy sadly couple together so well. From Sid & Nancy to Imagine: John Lennon, some great films and documentaries were made from the sad deaths and murderous tales involving iconic musicians. But in the end lives were lost and so was the hope for new music coming from those who we so admired.

The film “The Gits” is a celebration of the influential Seattle band of the same name, led by the charismatic Mia Zapata. With an innovative sound that coupled hardcore punk with heartfelt blues, The Gits were poised to break into the mainstream, but they would never achieve the success of contemporaries Nirvana or Pearl Jam because on July 7, 1993 singer Mia Zapata was found murdered – the victim of a rape/homicide.

It was a crime unsolved when director Kerri O’Kane began shooting her debut feature. In the interim however, fans, friends and celebrities like Joan Jett and Nirvana helped raise money to reopen what had become a cold case file. Mia’s death had reverberated throughout the music community, and Mia’s killer was brought to justice as the cameras rolled.

Upon the fifteenth anniversary of Zapata’s death there will be screenings and tribute events held nationwide in celebration of Mia Zapata’s life and the music of The Gits. If you in LA, “The Gits” documentary will be showing at THE ECHOPLEX on Monday, July 7 at 7:30 pm. Appearances by director Kerri O’Kane, and other special guests. For more info click here and peep the trailer below.