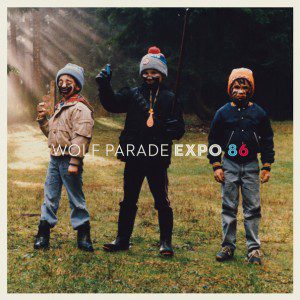 After Wolf Parade’s 2005 breakout success, “Apologies to Queen Mary,” it seemed that every Gen-Y’er with an Internet connection had christened the furry Canadian quintet as ones that would make something “big” ….  they were right.

But, rather than a clawed attacking of singles and activity, Wolf Parade instead let us nurse our wounds slowly as the years passed until 2008. They definitely toured, but it seemed most of the three-year gap was spent focusing on Spencer Krug’s and Dan Boeckner’s side-project endeavors. For the prolific Krug, there was Sunset Rubdown (two releases a year in ’06 and ’09 respectively to note) Swan Lake, Frog Eyes and after teaming up with his wife Alexei Perry, Dan Boeckner formed Handsome Furs, a project that yielded listeners two longplayers.

Named for the Vancouver, BC World’s Fair that birthed a monorail and large sports arena, the greatest asset to the band’s current “Expo 86” release is in its sheer vigorous new-to-form kick-start. Though the record was quickly done—the band started songwriting in November ’09 and mixed in late February/March—it plays out as a nimble release most of all the way through, never seeming to hint at being something rushed.

As a whole, “Expo” is much better than 2008’s “At Mount Zoomer,” an album that seemed to encompass the dissolving, scattered-punch of the side-projected efforts of Krug and Boeckner with the “we’re-now-being-called-a-big-time-indie-band-but-don’t-want-to-deliver-just-exactly-what-you-want” sort of thing (they evidently told Sub Pop there were to be “no singles” for the “Zoomer” release).

Knowing the importance of the dreaded sophomore album, “Expo” plays with a force opposite that of “Zoomer” in that the band’s third album’s songs are notable for the sheer, single-making characteristic they ultimately seem to possess. There’s a radiant, jabbing fullness and the record’s first handful of songs from “Cloud Shadow on the Mountain” up through “Little Golden Age,” are some of the most athletic, gratifying and pulsating tunes the band have ever written.

As always, the jittered poetic musings of both Krug and Boeckner (at times hard to notice the difference) are heavily sprinkled throughout these 11 tracks. “Palm Road” has a lovable, squelchy, synth-backed infection that references “drowning fish” and a slow-ending apocalypse whereas “What Did My Lover Say? (It Always Had To Go This Way)” Krug muses in his signature nasally croon over chugging keys and noodling guitars how he’s “got a friend [that’s] a genius, but that “nobody listens to him, or flatly with “Yulia” and a title that very well could have been conceived after a mispronunciation of “Julia” and few too many.

Standout “Little Golden Age” starts at a roll similar in that to best buds Arcade Fire (“Expo 86” was produced by Grammy-nominated musician and former Arcade Fire member– drummer on “Funeral”– Howard Bilerman) but plays out into a nostalgic tale of “being in the bedroom singing radio songs,” or sitting in the “parking lot stoned” as “cassettes wore out.”

An obvious sonic change lands at the band’s differing use of keyboards and synthesizers. Besides the more contemporary icy club sound coming from “Ghost Pressure,” there’s an even soaking of key players like The Cars’ Greg Hawkes meeting a heavy Gary Numan/Tubeway Army influence on tracks like “Two Men In New Tuxedos” and “Oh You, Old Thing.”

Once the playful “Cave-O-Sapien” starts to wind Wolf Parade’s third album to its close, you notice just how appetizing the last 55 minutes have been. “Expo 86” comes out as more of a glowing, weighted listen as anything they’ve previously done.

Being said, a known critical complaint for “Expo 86” is on its length. Some have called it flat out “excessive,” and on casual listen, I can easily see how this can be understandable, especially for those still praising the herky-jerk days of  “You Are a Runner and I Am My Father’s Son.”

It’s a lot of album, but for someone that’s just a casual fan, after five solid playbacks, I wasn’t the least bit bored or dissatisfied with any large part of it. I still don’t know fully why I’m backing “Expo 86” though. Maybe it’s cause I slept on “Zoomer” and that I’ve been getting a lot of LP’s that fall under the 30-minute-mark, but what I am honestly thinking is that it has a lot to do with the fact that I’m just plain liking the feeling of having infectious, no-brainer indie rock on in the background every once in a while.