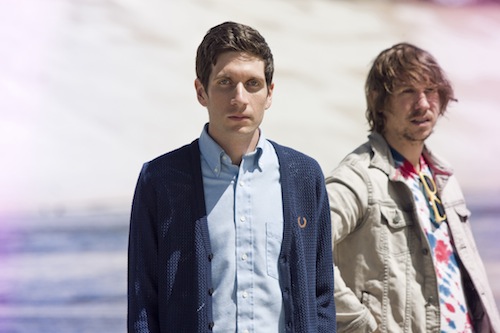 Door beating percussive throbs open “Life Prowler,” the welcoming introduction into No Age’s latest, Everything In Between. Their third longplayer (second for Sub Pop), the LA duo Dean Spunt and Randy Randall return with the follow-up to their 2008 Grammy-nominated “Best Recording Packaging” that is: Nouns. “One time is all I need to know my job’s complete and when I reach into myself, my self comes true,” Spunt bluntly croons over Everything In Between’s brief but thriving opener.

Spending a portion of this year touring and festival trekking abroad, Everything In Between was recorded during a comfortable five month span in LA. “Life Prowler” hits easily as that contemplative tune spawned from the back of cramped buses over travel time and load ins that every band knows all too well; it’s a preface of sorts, welcoming listeners back to everything they’ve missed. The band’s label mentions their noisy feedback-ed formations as ones “forever cascading in a positive direction,” Everything In Between follows suit, continuing lithely with what both its predecessors, Nouns and debut Weirdo Rippers, had successfully built.

Track-by-track, the album’s first half (up through the snotty basement bob of “Skinned”) probes the duo’s noisy influences with budded outcome. A pedigree track, “Depletion,” rips along with a scruffy Sonic Youth-fullness that’s easily swallowed before acoustic track “Common Heat” hits. A campfire sing-along for the weary masses, it feels as Spunt might be peering into his musical alternatives over lines like “Everyone around me knows I’m in trouble” I get myself up to go to work, I can’t find my pleated shirt, there’s no way I can get out of bed now.” Though still knowingly deadpan, the drummer’s voice is largely lucid, a noticeable departure from previous releases.

Woozy single “Glitter” is a lamenting love song (“I want you back underneath my skin”), whereas the nervous “Fever Dreaming” is a brutish roll along, heavy strokes and screeching blares included. Referencing the welcomed, voiceless headspace spin of their last LP (I saw the duo’s all-instrumental act ‘Unavoidable Prostration’ play a one-off gig for LA Record in June), Everything In Between has plenty of its own moments of swirl-amongst-the-clouds gaze to mention. An extended coda of cosmic swirl, the record’s second half opens with “Katerpillar” a short track echoing Nouns’ settling opener “Miner” before dropping at one of the best tracks the band’s ever done, the bracing slice of jangle breeze in “Valley Hump Crash.”

The voiceless pair “Dusted” and “Positive Amputation”— the latter of which meets Sigur Ros and Kevin Shields head on— find the band at their absolute, soundtrack-ready best; a venture the duo’s already explored, out of the album format, by scoring short film Aanteni back in March.

Following the aptly-titled “Shred and Transcend,” an accelerated garage tune, the last hoorah before the Eno/Bowie-like “Chem Trails,” Everything in Between ends and it’s here, just under 40 minutes, that No Age show just how enticing it is dedicating germane middle-ground between agile vigor, feedback-ed ramparts and delicate, gazing soundscapes. 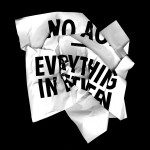 Artist: No Age
Album: Everything In Between
Label: Sub Pop
Release date: September 28, 2010

Stream No Age’s entire new album, Everything In Between!

No Age – Everything in Between by subpop