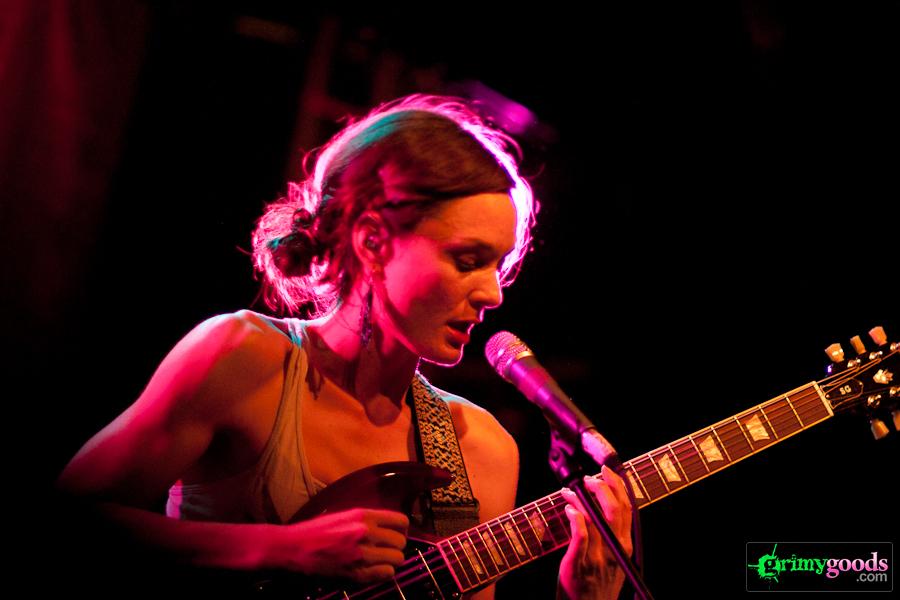 We all have that friend that doesn’t have the best taste in music. And just because you may have incredible taste in music, doesn’t mean you dislike your friend any less. In fact, you probably hope that some of your selections will rub off on him or her. This past Friday, October 8th at the Echoplex for Filter Magazine’s Culture Collide Festival, my very good friend (who doesn’t have the best taste in music) came along with us to see some of the bands perform. Not even two minutes through Land of Talk’s first song, he immediately smiled and said, “Oh my god, I LOVE this band!” From that moment on, I knew I was not going to enjoy Land of Talk.

Aside from taking some extra 10-15 minutes to get her sound check right, singer/guitarist Elizabeth Powell was already annoying me with her long delay. In fact some of her band members looked quite annoyed and wanted to get on with the show. For taking that long I expected to hear some pristine vocals and smooth guitars; but that surely wasn’t the case. The sound was not right leaving her vocals at times sounding way off from the instruments. I thought this was a bit weird because The Besnard Lakes who had played a beautiful set before them on the same stage sounded great. What irked me even more was how Powell was acting towards her “fans” in the front lines. A few of them were taking photos with their point-and-shoots and she was getting quite bitchy about the photos and flash. She even scowled at them as though she were some mega pop star too good for any paparazzi.  Regardless, I still stuck around for most of their songs hoping the style of their music would win me over. I along with many others found Land of Talk to be a bit bland and well, your basic chick pop-rock.

Feeling as though maybe I was being a bit of a harsh critic I took a smoke break out back to hear some feedback. I ended up talking to a few show goers who also found Land of Talk to be a bit lackluster with some definite sound offsets. Well, I guess I wasn’t being harsh. The best thing about Land of Talk’s set was guitarist, Joe Yarmush’s solo. That boy can jam! It was also exciting when Jace Lasek of The Besnard Lakes joined the band for a song. He added some needed flavor to the show.

But for what it’s worth, our photog got some pretty cool shots of Land of Talk.