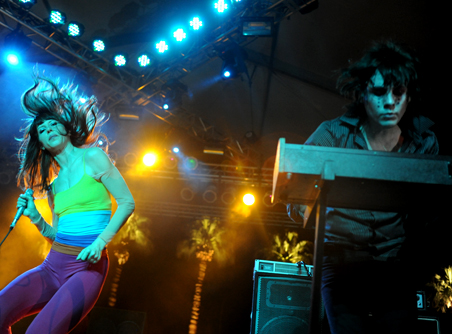 Glass Candy have booked a show at the Echoplex on Saturday, February 19, 2011. Presented by FYF, Glass Candy will be supported by AUSTRA, formerly Katie Stelmanis, and more bands to be announced. If you love that sexy Euro-steeze electro, you’ll love Glass Candy. They may be from Portland, but their elector beats, lyrics and rhymes are very European. Some may compare them to Italian disco or French disco. While the duo consisting of vocalist, Ida No and guitarist/synthesist/general producer, Johnny Jewel, their music has evolved greatly since their inception in 1996. Experimenting with various genres, lyrical styles and what not, one thing for sure is: “For a good time, call Glass Candy…”

Buy your tickets to Glass Candy at the Echoplex on Februrary 19 via TicketWeb!

One thought on “Concert Tickets: Glass Candy at the Echoplex on February 19, 2011”