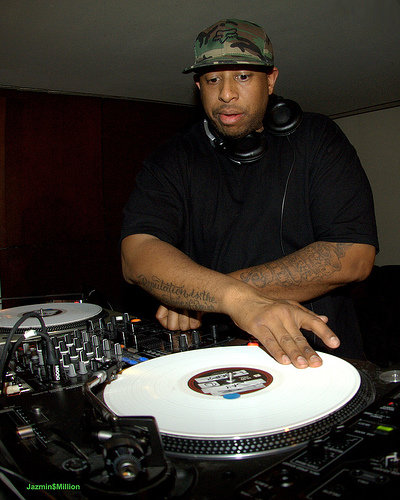 Get ready for a sic evening of hip hop as the Echoplex presents DJ Premier with the Beat Junkies on Saturday, May 14 at the Echoplex. If you know what’s up in the hip hop realm, you’re already down with these artists. If you don’t, well here’s a lil 411: Performing as a very special guest, is the iconic DJ Premier. More commonly know as the other half of the legendary Gangstarr, DJ Premier has been cuttin’ up the dope beats and producing some of the best tracks since the early 80s. He is largely known as one of the top hip hop producers in the world. Also on the bill, the Beat Junkies are one of the dopest turntable crews out there. Having laid down beats since the early 90s, you can expect to hear some REAL hip hop. None of this bull shit child’s play we’re exposed to today. The Beat Junkies will feature crew memebers: Babu, Rhettmatic, Melo-D and Mr. Choc. Do not miss this show! It’s gonna be some serious good shit on the real!

Tickets to the show are $10 via TicketWeb and available to those 21-and-over. But we have some tickets to give away thanks to the fine folks at Echo & Echoplex!

You must have a Twitter or Facebook to enter the contest. First make sure you’re following Grimy Goods on Twitter here and/or “like” our Facebook page here. We’ll pick winners at random on Thursday night, May 12. The winners will be direct messaged on Twitter or contacted below their contest entry comment on the Grimy Goods Facebook page. Winners will have until noon Friday, May 13 to claim their win or the tickets will be forfeited. To increase your chances, enter the contest both ways!

Via Facebook: just leave a comment on the Grimy Goods Facebook page telling us why we should hook you up with these tickets! Be sure to mention DJ Premier at the Echoplex so we know which contest you’re entering!

For more cool shows coming up at the Echo & Echoplex, click here. To enter other Grimy Goods contests, click here.