Blowing our minds with one of the most spectacular performances of 2011, England’s Portishead crossed the pond to play two sold-out shows at the Shrine Expo Hall in Los Angeles. On Tuesday, Oct. 18 we were amongst the lucky few who were fortunate enough to attend this show. If you were here, you should be stoked. Word has it that Portishead won’t be back around these parts until 2013.

Coming out from the dark on a large stage vast enough to fit the entire militia of Portishead’s range of instruments, the lovely—yet casual, Beth Gibbons was welcomed by a sea of impatient cheers. As the spotlight dawned on her golden hair, the intro to “Silence” off their 2008 full-length, Third—blasted through the speakers setting a percolating climax for the evening’s alluring events. Complementing this eccentric number was a set of almost-brain washing visuals projecting across an IMAX-like big screen. It was quite the enigmatic intro.

With a bit of technical difficulties with Gibbons’ mic during the first three songs, she gracefully carried on with both “Nylon” and “Mysterons.” Like an unstoppable force, her wanting vocals sent shivers down my spine as they danced over the spooky Halloween-esque instrumentals of  “Mysterons.” It sounded as though there were a theremin on stage creating such bewildering effects.

Ripping our hearts open and leaving us to bleed, Portishead moved us with an acoustic  performance of the sullen, loveless track, “The Rip.” Joining the acoustic guitar were throbbing arrays of the most seductive percussion—from crashing cymbals to exotic congas, it was the most pleasurable experience. Fans began to go berserk at the close of the song. At one point, all the carnal hoots and howls made me feel as though I were at a Raiders’ game. One obsessed fan behind me yelled out, “I love you Beth! Please play ‘The ‘Rip.'” To the fan’s surprise, I turned around and told her, “That’s the song they just played.” She laughed and belted out, “Oh, play ‘The Rip’ again Beth!” Funny …

Moving onto what were definitely some of the most provoking songs of the evening, Portishead had all the ladies singing to “Sour Times.” The bittersweet lyrics, “Nobody love me, it’s true, not like you do” steamed from our mouths like a cold rain on hot asphalt. It was pretty emotional. But the real nipple-hard-on came when Portishead struck us with the most haunting, dark rendition of “Wandering Star.” Holy fuck was this song heavy. As I type away on my MacBook Pro, reliving this experience—I can feel the goosebumps take precedent over my entire body. Gibbons’ emotive chant had a profound effect on us, especially with the sinister howls of the guitar and the droned-out bass line. By far this was my favorite song or their performance, along with the creepily-sexy, “Glory Box.” At this point, during the arousing guitar drawls and slow drums rolls—every girls’ panties had to be wet. Excuse my honest vulgarity, but this song is sexy as fuck. You want to get in your ladies pants? Play this song the next time you hang out.

At every close of the year, Grimy Goods, along with every other blog or music publication compiles their year end lists. Portishead’s live performance at the Shrine Expo Hall is sitting pretty in spot #1 for my top shows of 2011. If a live performer can pull so much emotion out of you during their set, and effect your body in ways that only the seductive touch of a human can—you best believe they are extraordinary. 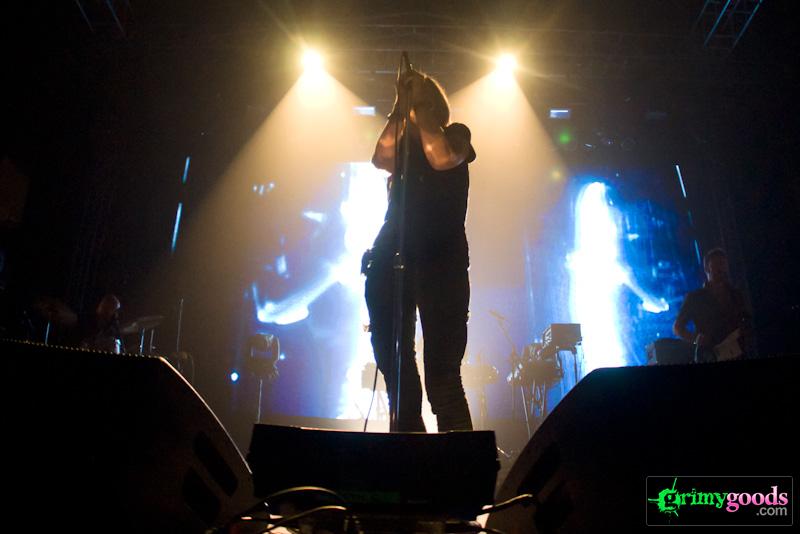