Oakland based Wax Idols, fronted by and ultimately the core creation of Heather Fedewa, aka Hether Fortune (former member of Hunx & His Punx, Bare Wires and currently playing with CastleFace Records’ Blasted Canyons) released their album No Future on October 25, 2011 on Hozac Records. It’s a punk-fueled smorgasbord of songs, spot on with the pop/post-punk nooks and crannies but the punk is more filler, no killer.

The album’s title, though a vaunted Sex Pistols classic, is a bit misleading as Wax Idols lack the raw defiance that defined early punk. The album kicks off with “Dead Like You” a dark but nondescript punk song, feels dead to me. The call and response of “Hitman” has some quirk but ultimately not satisfying any pure evil musical inclinations.

Nevermind the bollocks though!

Where Wax Idols does shine in my opinion, is in the poppier, post-punk tunes. “Gold Sneakers” is by far my favorite track. It has upbeat drive, the chorus of “I-I, l-l-love you” is insanely catchy, perfectly set against well placed handclaps and remains the one thing on the album that is consistently stuck in my head. There’s also an underlying sadness behind this love song gem. Hether Fortune wrote it about someone she dated who died and the lyrics aren’t afraid to touch upon that, even in a song as upbeat and seemingly chipper as this (click here for video): “I know you’ve got some monsters in your mind, or maybe hiding up your nose, can’t you just be happy to be alive, either way I want you to know.”

The grunge acoustic tone of “Nothing At All” sports some haunting melodies and I have to agree with the lyrics, “time is no friend of mine.” Propelled by a minute-long feedback fueled guitar intro, the stark “Human Condition” is bare bones and chilling. Pulsating toms pair well with the monotone but straight forward lyrics, “We get down, we get high, we get bored, then we die.”

Several so-so punk tracks follow but I prefer to skip to the end of the album and listen to the last song “Grey Area.” It’s an 80’s post-punk pop jam that has a staggered beat and a bright but lo-fi guitar solo that induces off kilter head bobs. The lyrics “I get so low, no one knows, what I do, when I’m alone in this room” are relatable and while not a punk track per se, it embodies a spirit and attitude of doing whatever the fuck you want to do (even if it’s not good for you or you’re not really sure why you’re doing it).

Overall, I feel that the punk is kind of dead on this album. I prefer my punk to be kicking, screaming, protesting, raging and igniting mayhem and life. However — the post-punk, pop, grunge is very much alive on No Future.  This album definitely stirred up mixed feelings for me but I am very curious to see how Wax Idols moves forth from this point and what direction they will go in musically. Check out the album and see what it stirs up for you! 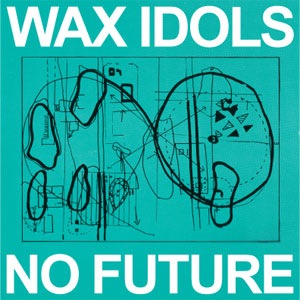