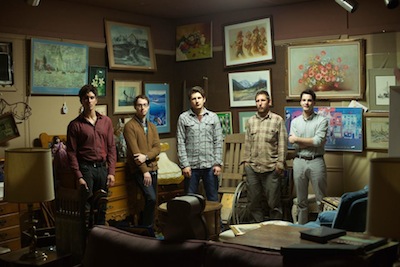 The Early November are back and are headlining a show at the El Rey Theatre on Thursday, June 7 with The Wonder Years and support from The Swellers and Young Statues. The Early November are touring in support of their new album, In Currents, their first album in six years—out July 5 via Drive-Thru Records. If emo, pop-punk is your thing, you’ll definitely want to jump on this show!

Tickets to this all-ages show are $22 plus service fees and the show kicks off at 7pm with doors at 6pm. Thanks to Goldenvoice we have some tickets to give away! Enter the contest below for a chance to win!

You must have a Twitter or Facebook to enter the contest. First make sure you’re following Grimy Goods on Twitter here and/or “like” our Facebook page here. We’ll pick winners on Tuesday, June 5.  The winners will be direct messaged on Twitter or contacted below their contest entry comment on the Grimy Goods Facebook page. Winners will have until 10 a.m. Wednesday, June 6 to claim their win or the tickets will be forfeited. To increase your chances, enter the contest both ways!

Via Twitter:  Who do you want to see most at this show and why? Send your Tweet to “Hey @GrimyGoods,” mention “ @theearlynov/ @TWYpoppunk/@TheSwellers and/or @EarlyStatues @ElReyTheatre” and be sure to include the following hashtag in your Tweet: #ContestEarly