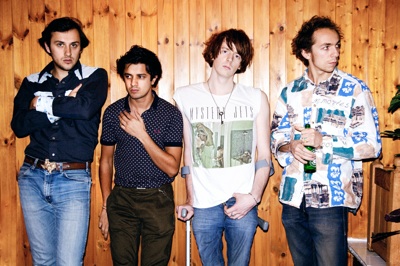 UK 4-piece Mystery Jets unleashed their fourth album, Radlands upon North America, on Rough Trade Records this past Tuesday, June 5.  Influenced by their trek to Austin, TX to record, Mystery Jets have paved a musical path that maintains an underlying Brit rock groove yet fully utilizes strength, emotion and appreciation from their submersion in country blues sounds and surroundings.

Elements of rock, blues, and country are all rolled up into this album and served up hotter than biscuits and gravy. The title track “Radlands” is a guitar-picking force to be reckoned with, swinging between plunging bass lines and vocal uprising.  This was the main track that inspired Mystery Jets to go to Austin, where they set up shop in a big, old, wooden house on the banks of the Colorado river to record the album. According to frontman Blaine Harrison, they also went in with the mindset that they wanted to record in a place that “felt like the furthest place from everything we knew.”  It sets the tone for their brave dive into an ambitious album, far removed from the poppier sounds of their previous work.

The quick stammering of keys combined with the sigh-ful background vocals define the dangerous and haunting “You Had Me At Hello.”  “I went to the desert because I wanted to find my pistol, I wanted to find out what it feels like to be invincible.”  “Someone Purer” is a reverb-drenched search for salvation while “The Ballad of Emmerson Lonestar” is a most amusing Jekyll and Hyde-like progression, eventually building up to a romp-rock sort of climax.  It all seem like a testament to a life on the edge, a blend of hope and despair—something often admired and adored in country/blues/Americana, the music of outlaws—cowboys and the downtrodden.

The album then lightens up with the bright flair of “Greatest Hits” insanely catchy guitar hooks, melodic “sha la las” and concrete snare hits, simply impossible not to love and listen to on repeat.  The bass grooves and fine falsetto choruses of “The Hale Bop” is like The Kinks meets the Bee Gees, oddly brilliant.  “Take Me Where the Roses Grow” with female vocals, courtesy of Sophie Rose Harper makes for a novel, romantic track accented by crooning slide guitar.

The album draws to a close with the epic, guitar feedback fury of  “Lost in Austin” and finishes with the acoustic lullaby, “Luminescence.”  The final track gives a sense that a journey has ended and the sun has begun to set.  After some finishing touches from producer, Dan Carey (Franz Ferdinand, Hot Chip), the record is nicely rounded out.  Having arrived in Austin with only the guitars on their backs (and borrowing equipment from locals), Mystery Jets show us they can hang even with the bare bones essentials.  In Radlands, they were able to strike the perfect balance of capturing the wealth of Americana/country blues influences they found in Austin yet never lost their authentic Brit-rock voice along the way.  Brilliant. 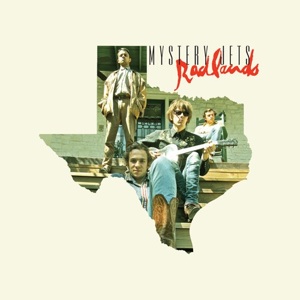 Catch Mystery Jets live at The Satellite on Wednesday, June 27! You can get tickets here.