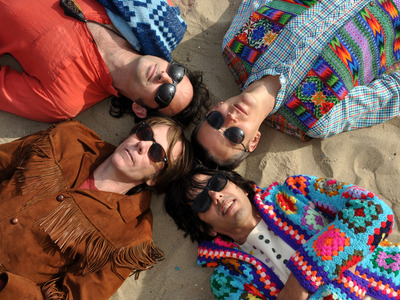 Beachwood Sparks headlines a show at the Echo on Friday, August 3 as part of the New LA Folk Fest Kick Off Party.  The band released their newest album Tarnished Gold in late June 2012 and round up a small set of West Coast tour dates in support, here and at the fest.  So, come on down and get down with the countrified indie-folk rock outfit! Folk Yeah!  Tomorrows Tulips and The Abigails support.

You must have a Twitter or Facebook to enter the contest. First make sure you’re following Grimy Goods on Twitter here and/or “like” our Facebook page here. We’ll pick winners on Thursday, August 2. The winners will be direct messaged on Twitter or contacted below their contest entry comment on the Grimy Goods Facebook page. Winners will have until 10 a.m. on Friday, August 3 to claim their win or the tickets will be forfeited. To increase your chances, enter the contest both ways!

Via Twitter: Send a Tweet to @GrimyGoods, and tells us why we should hook you up with tickets!  Mention “@beachwoodsparks at @TheEchoLA” and be sure use the following hashtag: #ContestSparks.

Via Facebook: Just leave a comment on the Grimy Goods Facebook page telling us why we should hook you up with tickets! Be sure to mention Beachwood Sparks at the Echo so we know which contest you’re entering!