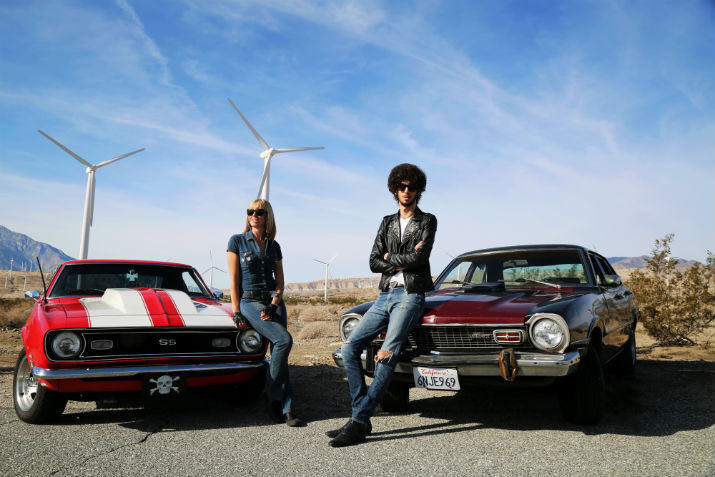 Dynamic Los Angeles rock duo The Two Tens, aka Adam Bones (guitar/vocals) and Rikki Styxx (drums), are set to release Volume 3 EP, the third of their four volume garage-punk assemblage, on February 10th (2/10!). The duo originally played together in the band Adam Bones but when that band began to falter, they realized that it was time for a change. With a similar sense of humor, work ethic and musical chemistry that just clicked, they knew that they could put their punk rock influences and penchant for having fun to good use. And boy are we glad they did!

Looking back on their previous rock n’ roll exploits, Volume 1 EP gave us hard-hitting pop delights such as “Scene” and “I Can’t Win” that felt reminiscent of early White Stripes and Ramones. Volume 2 EP showcased some deepened harmonies and epic guitar licks in “Dreams” and edgy power-pop tinged number “Can’t Pull Through.” That certainly had our ears perked and when we got a sneak peak of “Rush Out” from the forthcoming Volume 3 EP, it was a pure adrenaline rush that had our blood pumping.

We checked in with the band to find out how they deliver pure happiness to your ears, what Dave Grohl means to them, their plans for musical world domination in 2015, and more. Read on!

GG: Tell us about the writing/recording process for the new Volume 3 EP. Did it differ from your process with the first two volumes?

Adam: Well, we recorded 12 songs at Kitten Robot studios in L.A. Each Volume that we’ve put out is a selection of 3 songs from the 12. Volume 3 features one of the first songs I wrote for this band called “Rush Out”, a newer one called “Care At All” and one that was actually played in Adam Bones (the band) called “You Want It All.” We felt like “You Want It All” was just a good song and made it more in The Two Tens style. It worked.

GG: I saw on Facebook that you guys attended Dave Grohl’s Bday Bash concert…do you count Foo Fighters as an influence on your music? Who or what else do you count as your primary influences?

Adam: First of all, the concert was amazing. Three and a half hours of pure rock entertainment. It was a once in a lifetime show and we’re super excited that we got to be there for it. As far as an influence, I would say that we’re both fans of the Foo Fighters and we love their music, what they stand for and what they’ve done for rock in this generation. I don’t think we’ve necessarily taken anything from them musically. But regardless, I think we look up to Dave as our rock legend much like generations in the past have looked at John Lennon or Elvis. Musically, I tend to grab more from Nirvana than Foo Fighters when writing our songs. I do find myself telling Rikki, “just Dave Grohl it” from time to time when referring to a drum part. Haha!

Generally, we’re influenced by punk, garage, rock n roll. Our primary musical influence would first be the Ramones. We also are influenced by The Hives, Ty Segall, The White Stripes, as I mentioned Nirvana… the list goes on and on.

Rikki: I think the BIGGEST influence Dave Grohl and Foo Fighters have on me is the way they collaborate with other musicians and love supporting all forms of rock. When you think of the pyramid of rock n’ roll, there is not a lot of room at the top but Dave really branches out and wants to work with other musicians to create. It showed in their last concert with all the musicians they had join them on stage and it shows in the documentaries, Sound City and Sonic Highways.

Plus I’m a huge fan of Dave and Taylor’s drumming. If only……

GG: In addition to the Volume 3 upcoming release what else are you most looking forward to in 2015?

Adam: Taking over the world! Haha! We’ll be putting out Volume 4 soon enough. That will come with our fourth music video. We have a handful of really great shows coming up that we’re excited about. We’re planning on touring to SXSW. We’re gonna play more, get out on the road. 2015 is going to be a good and busy year for us.

GG: You guys always look like you’re having a blast in your Instagram photos…what’s your favorite way to have fun, when you’re not playing music?

Adam: Like I said earlier, we based this band on having fun. That is really important to us. So if it looks like we’re having fun, it’s because we are having fun. As far as having fun when I’m not playing music, I like to do the regular stuff. Go to shows, hang out with friends, watch sports (yes, believe it or not, I’m into sports), walk around Amoeba records every once in a while and eat. You can’t tell, but I do eat well and I enjoy it.

Rikki: I think our philosophy on life is pretty similar and it involves a lot of “FUN.” I enjoy going to shows. I love practicing my drums and playing all genres. I also have a black lab named Bailey that I am totally in love with. She keeps me pretty busy.

GG: Rikki Styxx, tell us about your bad ass drum kit. Looks like you have some nice custom art on the bass drum head.

Rikki: Recently I reached out to friend Stephen Blickenstaff to create a design for us. You might know him, he did the album artwork for The Cramps, Bad Music for Bad People. When I emailed him the idea I had for the design, he was at lunch and took a pen and did a sketch on a napkin and emailed it right back. Really great stuff.

GG: Adam Bones, you have one badass ‘fro…what’s your secret, or is it au natural?

Adam: If I told you my secret, I’d have to kill you. Haha! The curls are natural, but I style it to make it this way. Right now, I’m kinda overdue for a trim. The ‘fro is pretty large at the moment. Haha!

The Two Tens Volume 3 EP Release show at The Satellite is going down on none other than 2/10 of course! Rock out to the new songs live! Supporting acts TBD. Get Tickets!