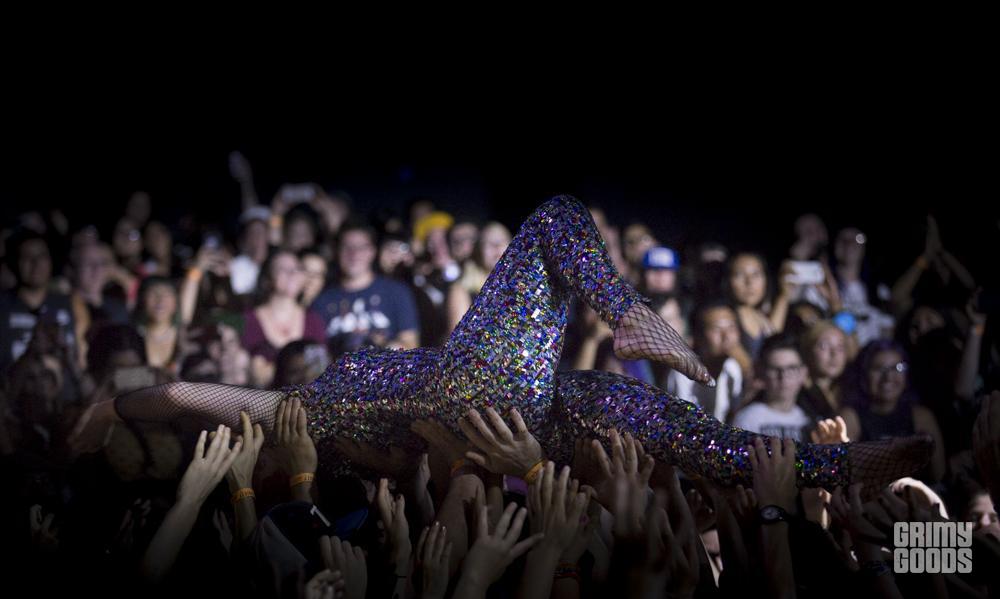 Saturday, I got to see a half-dozen female-fronted musical acts perform at Burger Records’ second-ever Burger-a-Go-Go at the Observatory in Santa Ana. The bill featured rock icons like Kathleen Hanna of Bikini Kill and Kim Gordon of Sonic Youth — but also featured a number of rising female musicians that are taking the baton and running with it, like Cherry Glazerr, Bleached, and Kate Nash.

I arrived at the Observatory around 5:30 PM, enough to catch the end of the Summer Twins‘ set. I had previously seen them open for Jenny Lewis at this same venue a few weeks ago and enjoyed them just as much this time. They turned in a very well-timed cover of No Doubt’s “Just a Girl” to wrap up their set before Kimya Dawson took the stage.

Dawson is best known perhaps for her scoring of the film Juno. Though I was not a major fan of the film itself, the music stood out to me as great on its own merits. Her lyrical stylings reminded me a bit of Youth Lagoon meets early Rilo Kiley, which made me a big fan from the outset. Dawson delivered a rousing performance with nothing but an acoustic guitar, but she saved her most powerful performance for a poem she recited at the end that’s centralized theme was the need to do our part to erase systemic racism. The imagery she used in her lyrics was extremely affecting, to the point that there were numerous people nearby that burst into tears. It left me with goosebumps. 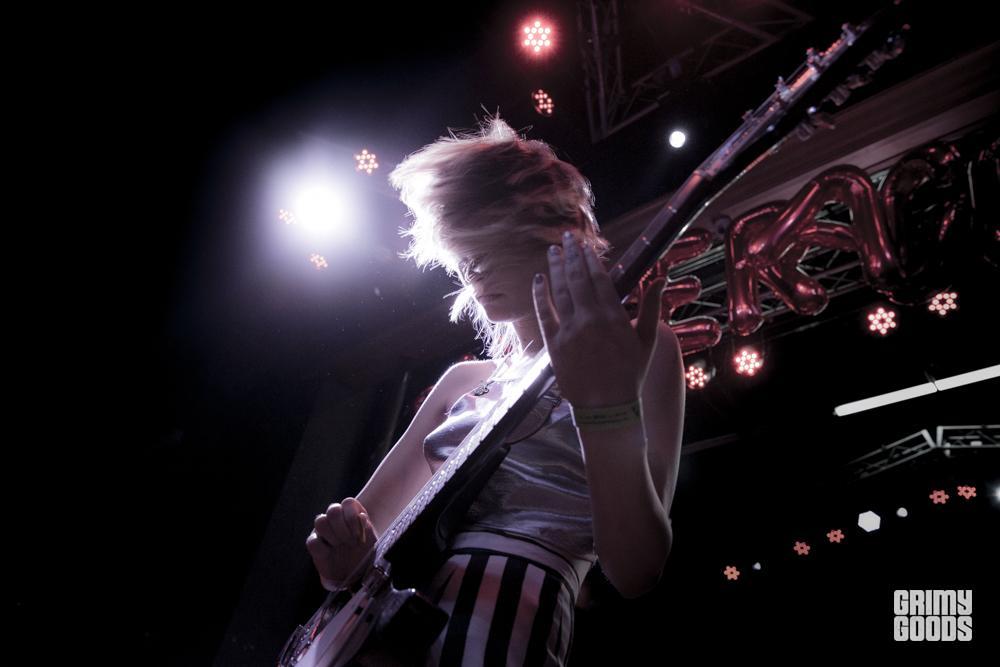 I finally got the opportunity to see teenaged rockers Cherry Glazerr. Lead vocalist and guitarist Clementine Creevy might be just barely 18 years old, but she performs like a seasoned rocker. The vocals were a bit difficult to hear at moments, but she sold the hell out of it and was able to get the crowd to start a crazy mosh on more than a few occasions. “Had Ten Dollaz” and “White’s Not My Color This Evening” had everyone losing their sh*t, but it was the song “All of My Friends” that showed a different element to their sound than the straight-forward lo-fi garage rock that has put them on everyone’s radar. This and one other song came across with that Portugal. The Man vibe, particularly the way Creevy was able to carry a falsetto-sounding voice. Cherry Glazerr are a must-see whenever they play a show.

Bleached took the stage next. I had previously seen them open for HAIM at The Wiltern last year, but only caught the last few songs of their set from the very back. I was happy to get to see them this time up close. They sounded a bit like Green Day meets Hole. Sisters Jennifer and Jessica Calvin were complemented nicely by the bass-playing of Micayla Grace, who I fell into serious like with after watching her strum the hell out of her four-string. The dancing picked up right where it left off during Cherry Glazerr and I wondered where people would find energy for a show that wouldn’t end until almost 2 AM. They played a few new songs that people responded to really well and closed their set with the explosively-popular “Dead in Your Head.” Like HAIM, Bleached sounds a lot more rock ‘n’ roll live than they do on recordings and they had one of the best sets of the night. 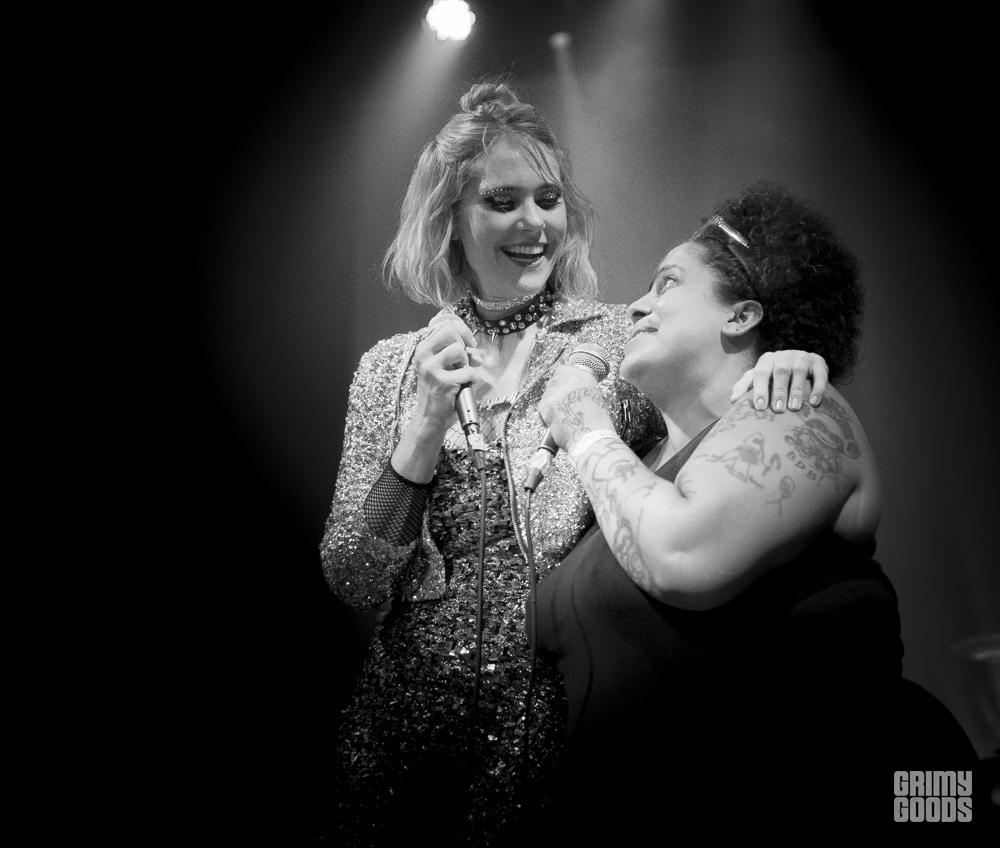 Up next was Kate Nash, who I’d just seen put together a killer show at The Echo two days prior. Nash had a couple tricks up her sleeve for this special event. After kicking things off with the hard-rocking “Sister,” Nash brought out Kimya Dawson to perform the song from Juno, “Anyone Else But You.” It had an awesome campfire feel to it. Also mixed in was an awesome cover of Meredith Brooks’ ’90s one-hit-wonder girl anthem “Bitch,” perfect considering the setting. Nash would also pay homage to Hanna with a cover of “Rebel Girl” by Hanna’s old band Bikini Kill mashed up with FIDLAR’s “Cocaine” re-purposed as “Girl Gang.” Nash was decked out in a glitzy and sparkly dress, her hair considerably more orange than two nights prior. Her band was also dressed up for the occasion and guitarist Linda Buratto again shined. Nash closed her set with “Underestimate the Girl,” a punk-rock banger.

Kim Gordon brought side project Glitterbust to Burger A-Go-Go. Nobody seemed prepared for what Gordon and Alex Knost of Tomorrow’s Tulips brought. It turned into a lengthy mostly-instrumental shoegazey as f*ck set with Knost stumbling around the stage while mashing on his guitar, distorted sounds bouncing off the walls of the warehouse-like Observatory. Gordon, in some sort of knockoff jersey, stepped up to the microphone to deliver mostly inaudible vocals very infrequently and people did their best to digest the set, a stark contrast to the high-powered and high-energy jams that Cherry Glazerr and Kate Nash had brought just previously. Someone near me remarked they wished they had brought the right kind of drugs for this set, and it felt like it would have been a good opening act for Tame Impala or Spiritualized or something. 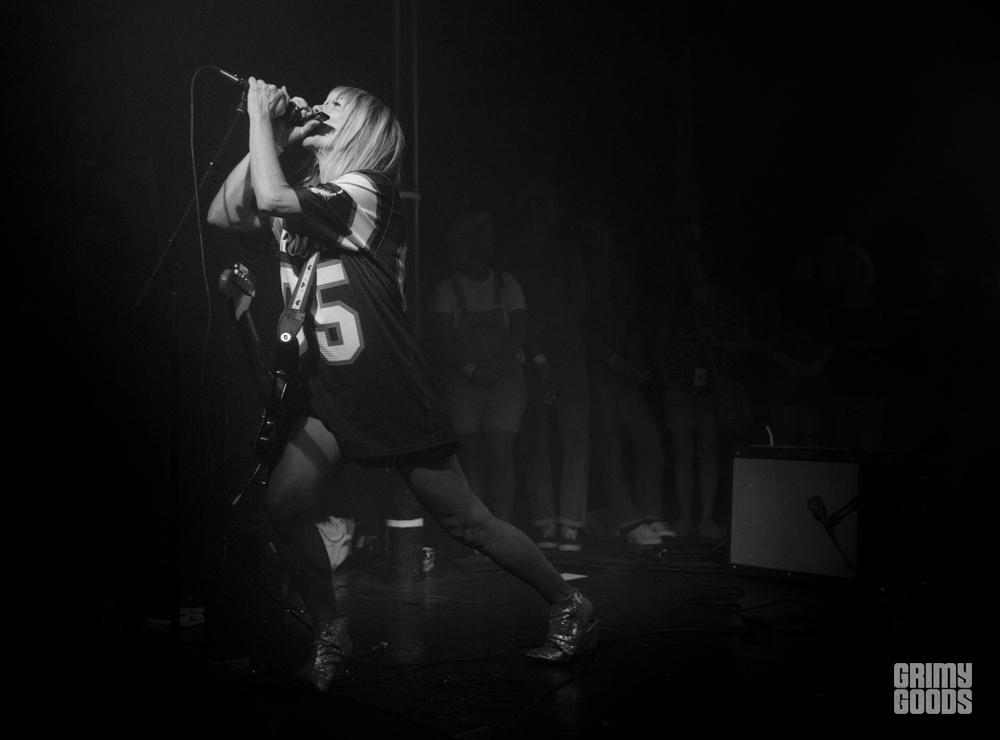 Kathleen Hanna and The Julie Ruin were up next. No doubt, this is who most people I spoke to came to see. A girl next to me who camped out on the rail from early on pulled out a large dildo from her bag and began swinging it in the air as Hanna and her band jumped right into things. Early in the set, there was some commotion over a guy that was a little too inebriated, apparently causing some distress amongst those around him. A girl called this out to Hanna, who was confused by the commotion but eventually made security aware of the situation. It seemed to take things off track for a minute, but Hanna got things back in swing. Hanna combed through her deep catalog of songs, including the Le Tigre favorite “Eau D’Bedroom Dancing,” which features a fun and inviting bass line to go with some killer guitar work. The Julie Ruin song “Apt. #5” was about realizing when you don’t need to put up with someone being a bad friend to you, according to Hanna prior to the song. The line “I don’t give a f*ck what you think anymore anyway” hit like a ton of bricks and it was amazing.

Finally, it was time for Chan Marshall aka Cat Power. I had seen her three years ago in support of her last studio album Sun in my lone trip to New York. She played a big venue with a full band and I wasn’t sure what to expect on this night given she wasn’t touring in support of any particular work at the time. I was thrilled to see Marshall walk on stage by herself, her blonde mohawk gone and replaced by the long brown hair that had been there throughout her career. 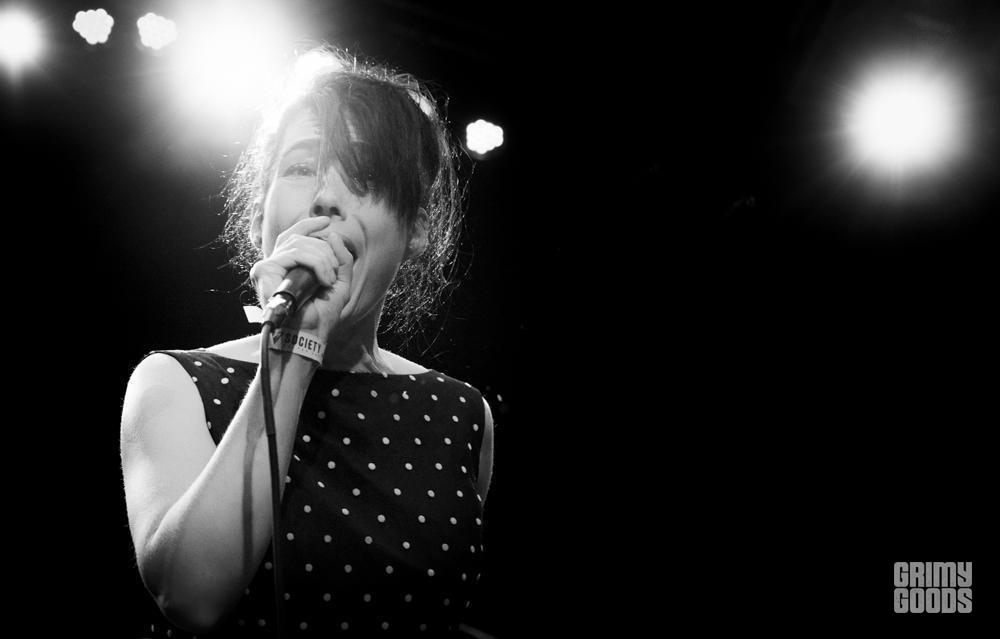 Marshall seemed in a good place early in the set, celebrating the birth of a baby a few months prior. It was 12:30 when she got started, and the many hours of boozing was starting to take effect on some of the people in the crowd and they lost most control of themselves, shouting shit at Marshall far too often. It’s one thing to show your support for a musician, but when they’re performing a quiet and affecting set, you would hope they could be mindful of those around them. Marshall took it in stride and didn’t let it affect her — yet.

Marshall performed her fantastic cover of “(I Can’t Get No) Satisfaction.” On the album, she doesn’t sing the chorus, but on this night she slipped one of the choruses in and people took notice. Marshall wasn’t done playing covers — it’s something she’s become known for as she is able to turn other people’s songs into her own. Michael Hurley’s “Werewolf” and Burt Bacharach’s “What the World Needs Now” highlighted the early portion of her set. Marshall also turned in a piano re-imagining of her Sun track “3,6,9” that caught me and others off guard. Marvin Gaye’s “Can I Get a Witness” was particularly strong and people couldn’t contain themselves when Marshall sang “witness, witness” — to which people screamed things like “amen.”

The high point of the set was “Maybe Not.” It’s one of the more dynamic and mighty Cat Power songs out there and she did it so much justice. It was so quiet in the Observatory that you could hear a rat pissing on cotton. 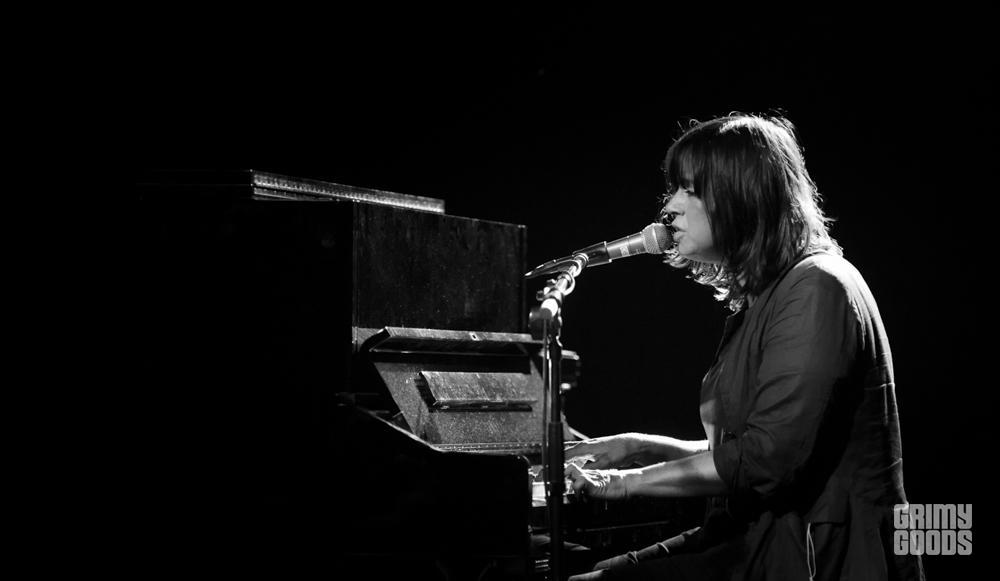 As the night began to come to an end, things started to unravel a bit. Marshall didn’t know how to end the show and the crowd grew restless and shouted at her to finish her set with one of her more well-known songs. She’d dug into some deep cuts like “Say” from 1998’s Moon Pix. One asshole in particular yelled, “Just wrap it up with ‘The Greatest’ and call it a night,” which got the guy yelled at by the crowd. People were talking and starting to get totally inconsiderate, marking up a riveting performance. Marshall looked as though she was feeling like she didn’t deliver, which was far from the case. For 45 minutes, she was on fire.

At the end, she just began to buckle a little bit and flashed moments from earlier in her career where she had trouble on stage. She rambled a little bit with a few stories and sat behind the piano in an attempt to deliver on the song people were shouting at her to play. She stopped before approaching the vocals and apologized to the crowd. I was disappointed that nobody working the show came to Marshall’s rescue, perhaps they could have told the crowd we were out of time instead of putting the guilt on her shoulders? She was sort of left to drown out there and the show was over, but it took another five minutes for Marshall to leave the stage.

She seemed genuinely happy and appreciative of those who had stayed until nearly 2 AM to see her perform. I was actually shocked at how many left after The Julie Ruin. You don’t get to see Chan Marshall do her thing that often, and to see her do it on her own was particularly special.

Though there were kinks throughout the night, Burger A-Go-Go was my first all-day Burger event and I was impressed by the way it flowed. The merch setup outside was awesome. Most people were outgoing enough to chat up between sets as you held your spot in the pit. I’ll definitely be looking to return to the next Burger event like this one. 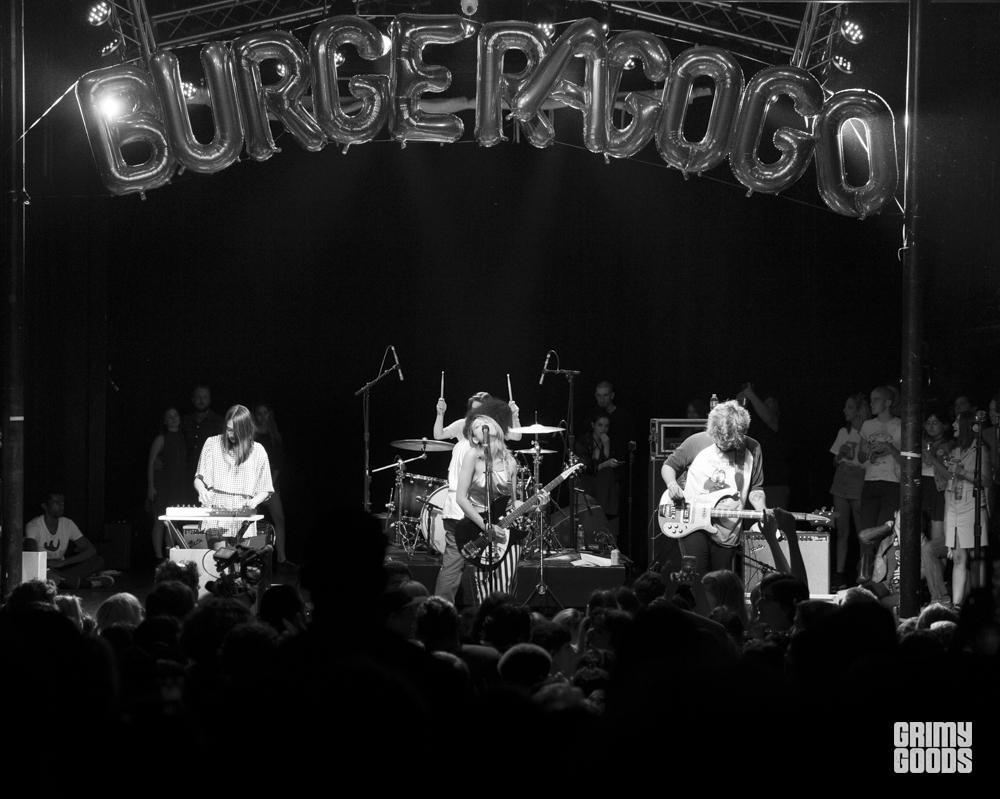 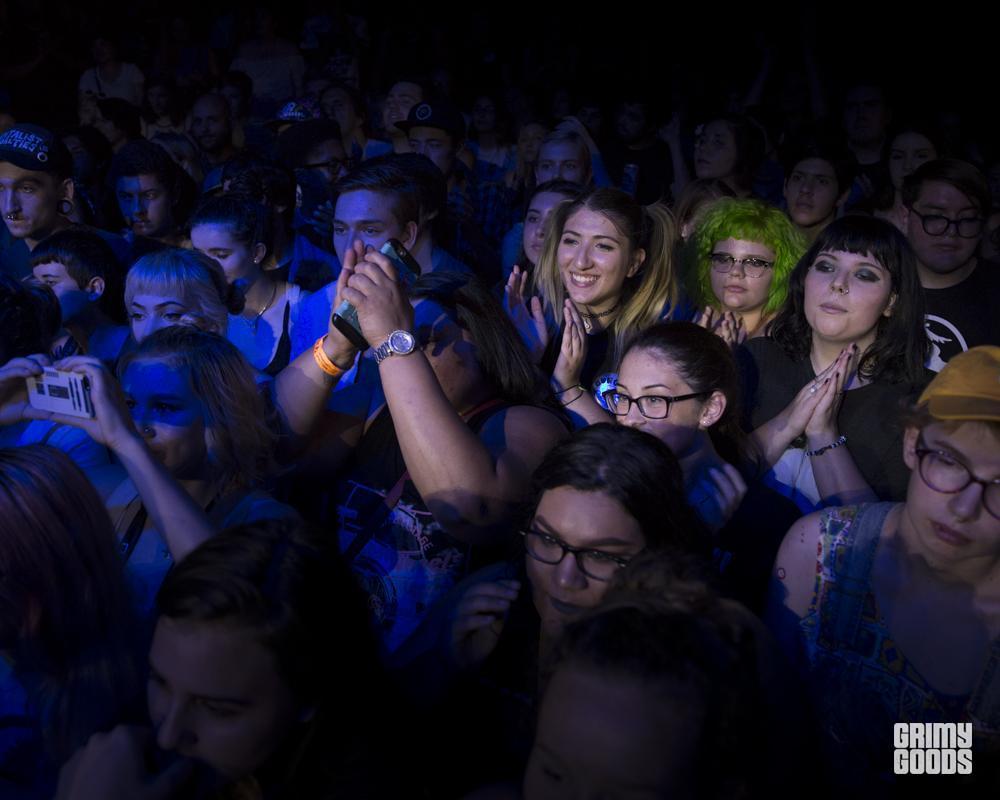 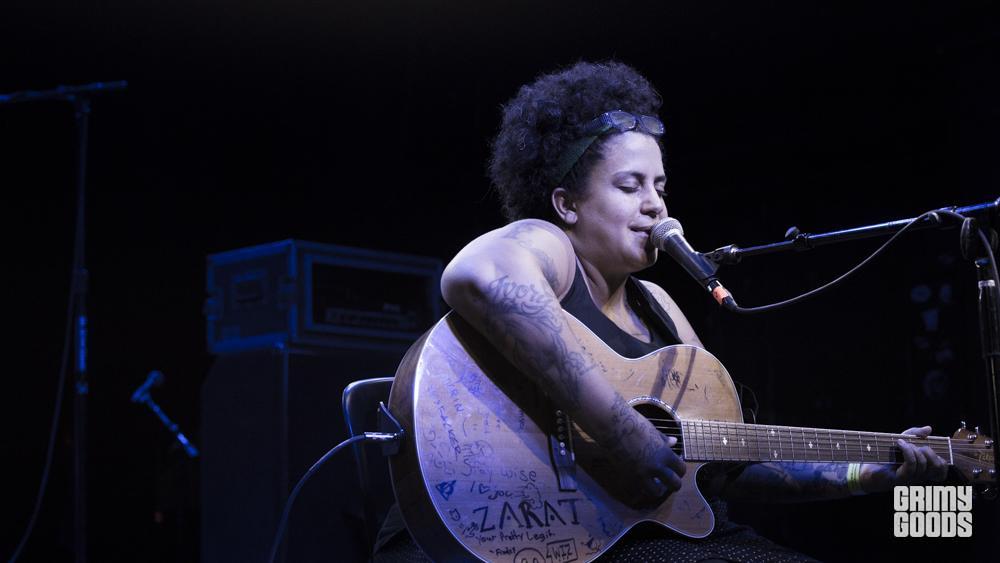 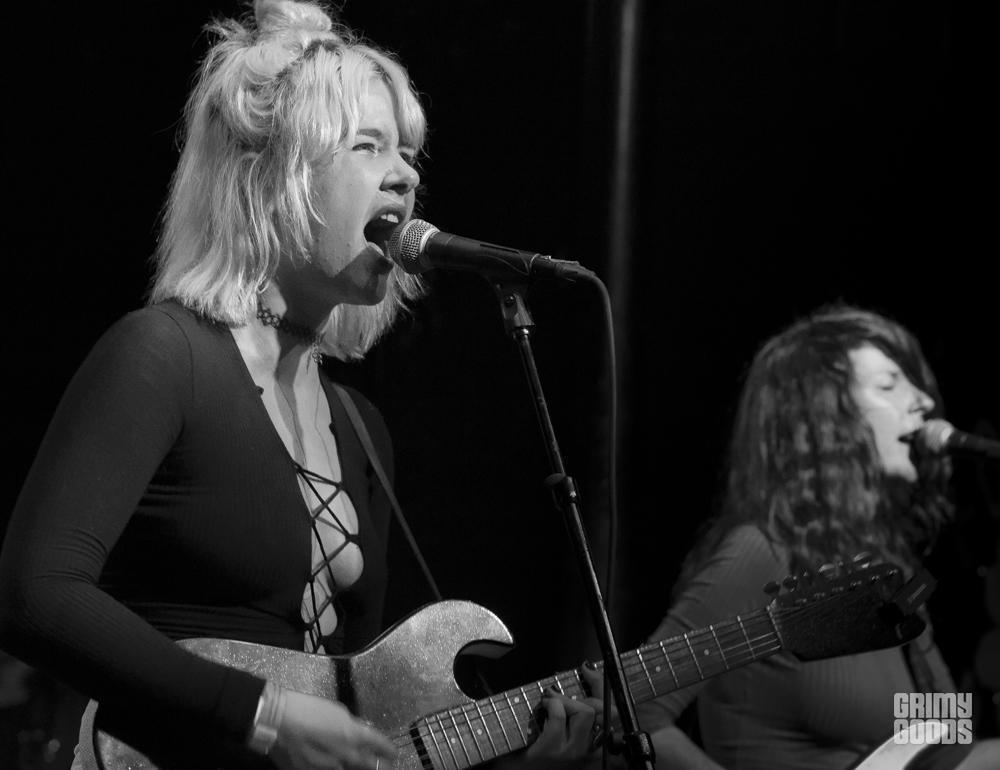 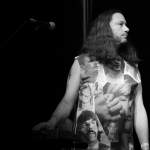 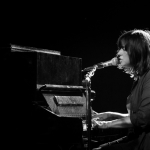 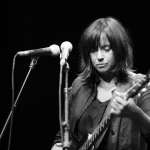 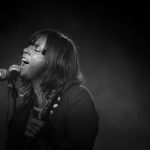 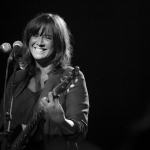 The Best Ladies Night That Ever Was: Burger A Go Go! 2014