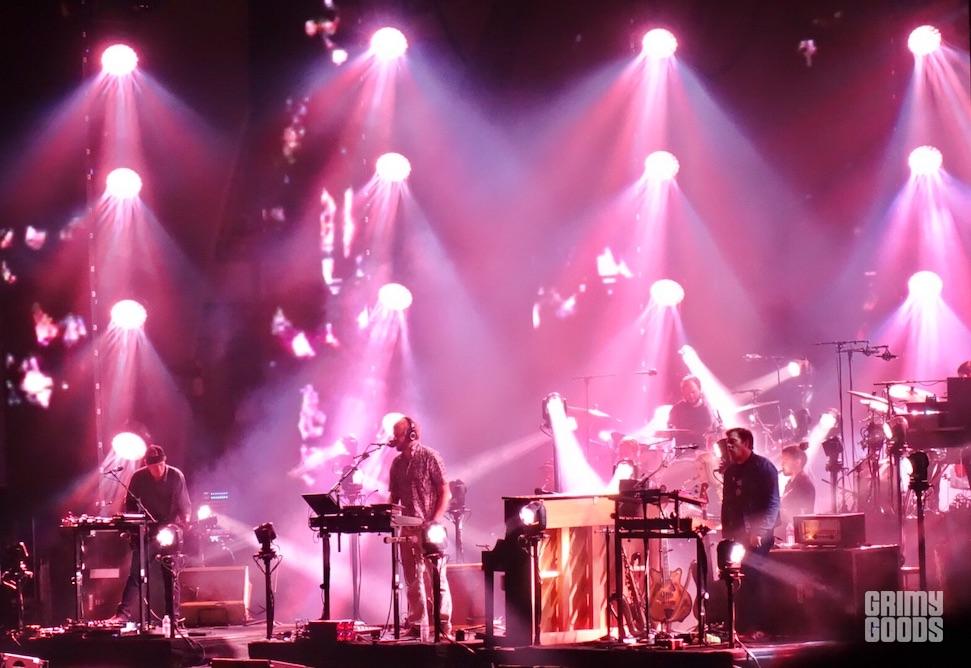 Bob Dylan once said that “passion is a young man’s game.” Patti Smith is not young, nor a man, and yet her passion onstage is more genuine than any modern performer’s. This was evident in her short performance before Bon Iver last Sunday at the Hollywood Bowl. She will be turning 70 years old this year, and in one sense, it’s a disappointment that an incontrovertible legend would have to “support” any artist, let alone one that has existed for only about a decade now, but bitterness was the very last emotion on Smith’s mind. She acknowledged this dynamic onstage, thanking Justin Vernon explicitly for the opportunity. Her long hair silver and her face unaltered by anti-aging tricks, Smith does not face the typical turmoils of an elderly celebrity. On stage, she is ferocious, yet her every movement is graceful. Intense, but not one bit tense. Even when she transitions into her signature haunting croak, that gravelly wailing she employs at the ends of songs to stake her messages, there is a Zen-like quality to the words she uses. Patti Smith is at peace, and in a world that she characterized during the show as having “so much defiled nature,” and “children lost in senseless wars,” before playing “Peaceable Kingdom,” the members of this posh Hollywood Bowl audience could only hope to feel the ease that she exhibited.

Nostalgia tours often possess the innately depressing quality of holding onto something that no longer exists in the air. However, Patti Smith’s music and poetry are not of their time in any way. They are simple, raw, and real. She takes the stage alongside just four musicians, her name stenciled in spray paint on the drummer’s bass drum head. She gives us the hits, from “Because the Night” to “Gloria.” The Hollywood Bowl, though lavish and alluring, is not a place where music is foremost. There are still mobs of latecomers filing through the walkways, casual conversations taking place across the boxes, and steak dinners being eaten in the front pit. Smith could feel this energy, but she clearly wasn’t allowing it to faze her because she knew she had all the power she needed with in her. Minutes into the show, there was pouring rain. “Thank you for the rain,” she repeatedly called out to a spiritual being above. Indeed, she performed “People Have the Power,” but the delight of a Patti Smith show is the freestyle poetry in between. In the final crescendo of “Pissing in a River,” Smith reached out to her jaded audience, saying “You are fucking free!” over and over, louder and louder until it became unbridled screaming, as if to wake each audience member from an ideological coma. To see a musician with so much power in her voice, figuratively and literally, who has changed the world so tangibly through her iconic songs, is an honor to witness. When she performed “Gloria,” it felt exactly like being at Saturday Night Live in 1976. 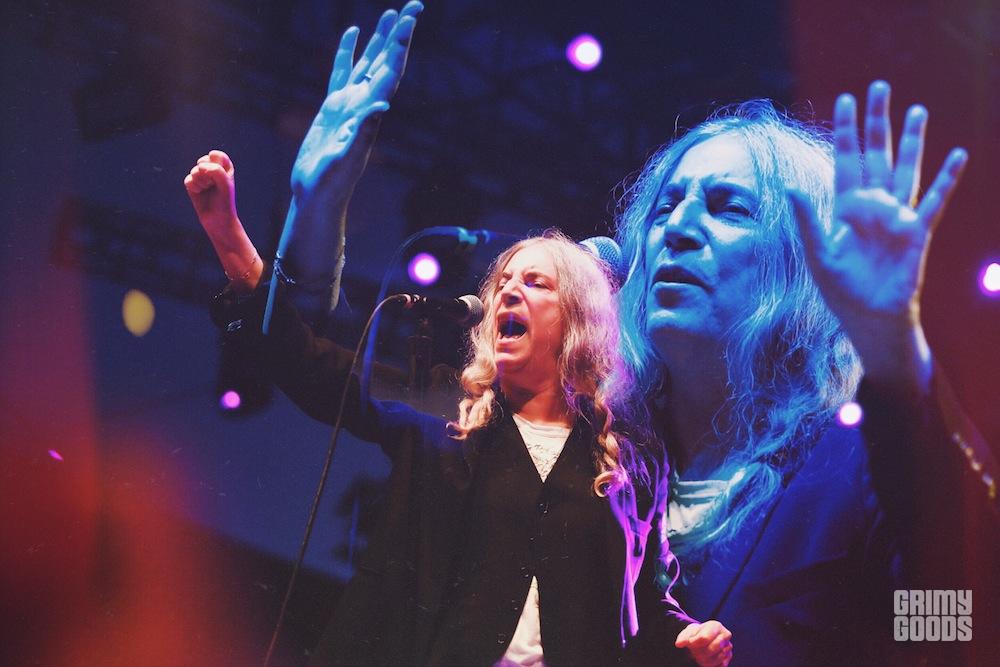 If the rain during Patti Smith possessed poetic value (for out-of-town readers, remember it rains in Hollywood only a few times a year), then the sky unexpectedly clearing before Bon Iver’s set forces us to question which was the real musical miracle. But finally, the man of the hour walked onto the colossal amphitheater stage, and it was only natural for longtime fans to feel a rush of pride seeing the reclusive folk singer advance from a cabin in Wisconsin to headlining the Hollywood Bowl. Right away, several nods to Radiohead are present in the Bon Iver live show, whether intentional or not—the long LCD screens backlighting the band, the use of two drummers for dramatic live polyrhythms, and most distinctively, the subtle method of treating the performance like a studio session. Clad in a cap and over-ear headphones, sitting behind a table of electronics, this performance probably wasn’t directly inspired by Michael Jackson. However, that is not to say that any bit of beauty was compromised in the songs, as the sample for “22 (OVER S∞∞N)” ran and Vernon crooned the somber intro. From there, every song from 22, A Million was performed in album order. Though one may not have guessed it upon listening, these songs were designed for a live setting. Almost every track involves a five-piece ensemble of saxophone players that Vernon noted were named “The Sad Sax of Shit.” There is a charming sense of casualness and humor from Vernon in between songs, and at one point he even admits he never knows what to say onstage.

Having watched Bon Iver’s set at Beach Goth the night before (and covered it for Grimy Goods) was an astounding revelation of how different any Hollywood Bowl performance is from the standard stage setting. Designed for orchestras and symphonies, it’s only natural that sitting down in bleachers hundreds of feet away from the stage outside gives an atypical effect. The Hollywood Bowl also honors a strict volume ordinance in mindfulness of surrounding homes. All things considered, the Hollywood Bowl is about being at the Hollywood Bowl first, and about the music second… at least for an arresting set like Bon Iver is capable of. For example, when Vernon and his band performed “10 d E A T h b R E a s T ⚄ ⚄” at Beach Goth, the front audience was frozen with excitement. The galloping bass line pulsed through our chests, the hand-drawn hieroglyphs on the surrounding screens hypnotized us, and bathed in the stage lights, we were able to look Vernon in the eyes as he expelled his pain through the microphone. At the Hollywood Bowl, this heart-stopping power ballad was just as well-executed, but reduced to a sort of gallery spectacle. The comparison is not the fault of Bon Iver as a live act, but rather the decision to play the Bowl in the first place. 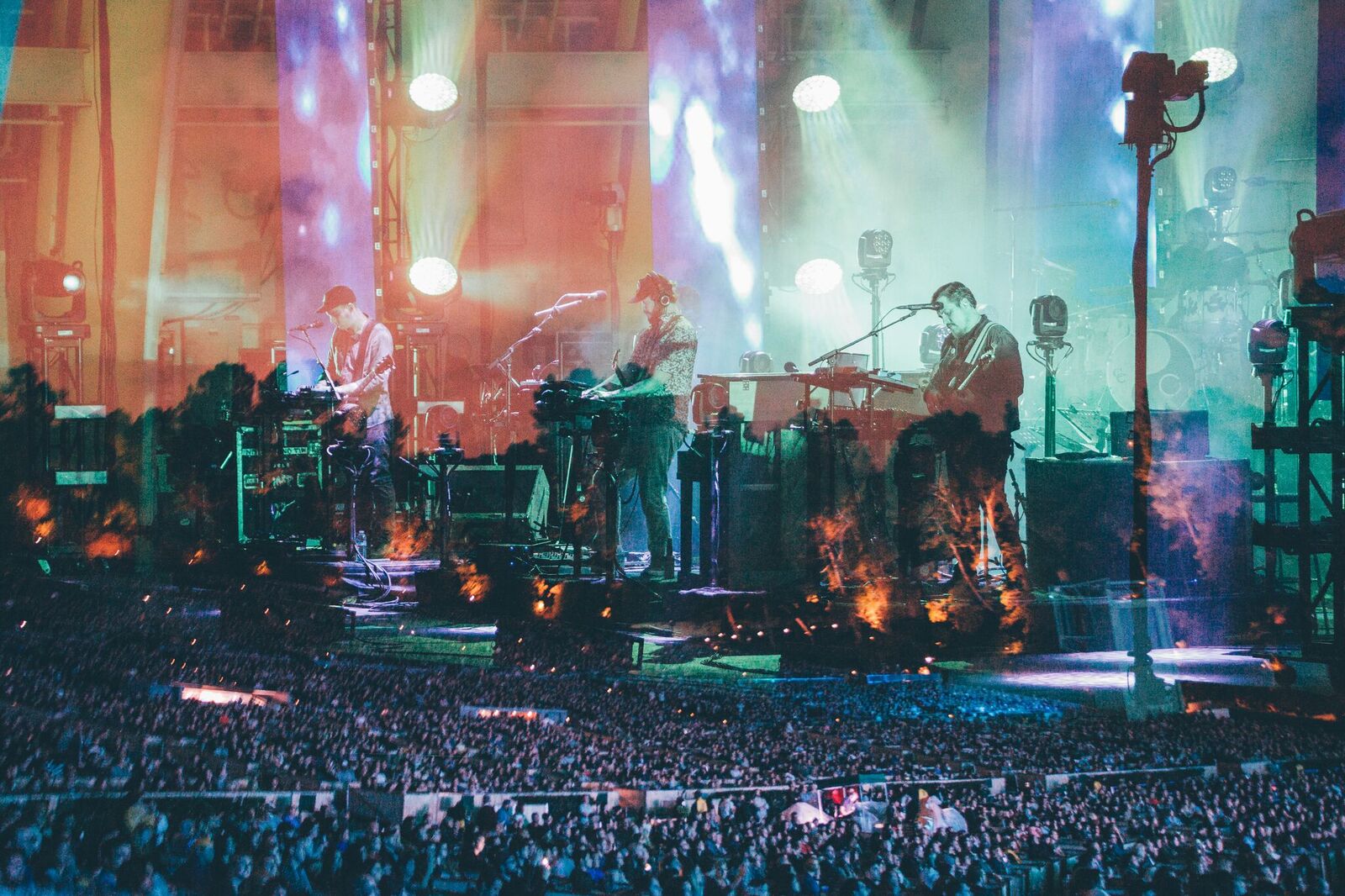 Bon Iver at the Hollywood Bowl — Photo by Scotify

To merely direct readers to my ecstatic review of Bon Iver’s short Beach Goth set feels like lazy reporting, but this is a unique situation in which I saw the same life-changing live set in two different settings, one simply magical and the other frustratingly less magical under the respective circumstances. This is not to say, however, that the latter set lacked magic altogether—toward the end at the Bowl, the band cleared off and Vernon sat down at the foot of the stage with his trusty old resonator for “Skinny Love,” which was met with an exponential increase in applause compared to songs from the new record. Like at Beach Goth, Vernon has the power to cast total silence across an audience of thousands when he sings from his deeper register. Goosebumps were raised from start to finish, and at some point during the final chorus he stopped strumming his guitar to deliver the heartbreaking lines a capella. Some musicians need nothing more than their voice to arrest a sea of fans. The only upset in this moment of perfection was the aisle in front of me gushing with those who only wished to see that one song, immediately after it was done. It’s puzzling to see so many people who paid hundreds of dollars each leave in the middle of an artist’s set, but this is not my first time witnessing a post-hit exodus at the Bowl. 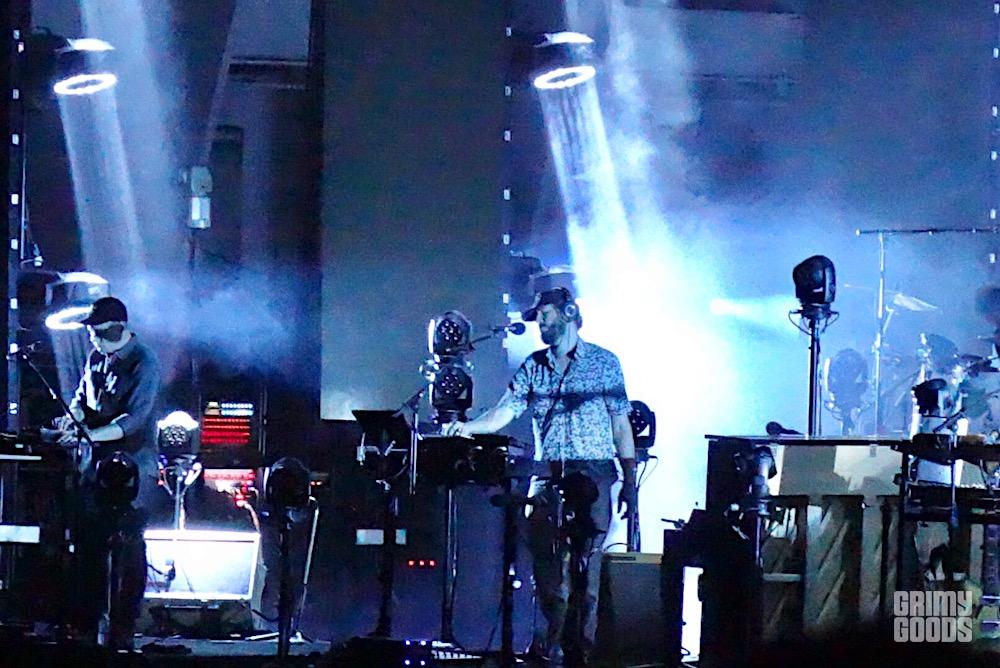 It’s also worth noting to those who still think of Bon Iver as our friendly neighborhood folk troubadour that the 22, A Million tour is also an unprecedented marvel of live experimentation. On “____45_____,” Vernon plays along on a keyboard in unison with his saxophonist as he solos, and it seems the keyboard is rigged to some sort of harmonizer that manipulates the sound of the saxophone. At the end of “21 M♢♢N WATER,” each member takes to their pedal boards and synthesizers to summon one of the most chaotic barrages of noise imaginable, and combined with the mesmerizing spotlights and screens, this was unexpectedly the peak of the show’s 22, A Million sequence.

Before closing out, Vernon sat at his piano and thanked Patti Smith for sharing the stage with him. He reminisced of her sentiment, “You are fucking free,” and tenderly added, “If you don’t know that constantly, you’re not doin’ it right,” as a life lesson. They closed with a raging rendition of “Creature Fear,” the only other For Emma, Forever Ago number in the set, followed by a short encore of the sorrowful “Beth/Rest.” Rest assured, when a consummate vessel of music like Vernon lends his heart in a performance, mega venues like the Hollywood Bowl plainly do not do it justice. However, from musicianship to visuals to live production, Bon Iver stands as one of the most moving live music experiences of our time.