It was Halloween weekend and some of the freaks and ghouls came out to see the Pet Shop Boys at the Microsoft Theater, Saturday night. I ran into Jareth (aka David Bowie from Labyrinth), a man dressed in a green suit from head to toe, and when asked what he was he just said: “I am myself.” Unfortunately, Microsoft Theater would not let him in the venue as himself because his face was covered by a green suit, but he fixed it and he was let in, along with every other cosplayer.

The show was supposed to go on at 9 p.m. but they held out for a bit because the seats were not quite full yet; actually they were far from full. I think people expected an opening act so fans took their time coming in. Finally, the lights dimmed and the crowd roared. Neil Tennant and Chris Lowe appeared on these platforms with circular backgrounds behind them, they started the show off with “Inner Sanctum” the seventh song on their new album Super. Song two was shockingly “West End Girls” off their debut album Please. Talk about sparking the nostalgia; I wore this cassette out when I was a kid, that’s for sure.

The Pet Shop Boys took us all on a time warp into the future. They are not the type of performers to get on stage and run around and get crazy; instead they focus on art and ambiance with a state-of-the-art laser light show. It was very impressive with beams of light going in every direction throughout the theater. Fans were amazed; you could here the “wow” and “whoas” in the crowd as they watched in awe. It was quite spectacular.

Tennant is not a man of many words, as he said himself on stage, but he did mention that Los Angeles has been very good for The Pet Shop Boys ever since Richard Blade (KROQ DJ, and Host of Video One) played them for the first time in 1984. That was a pretty special moment for those of us who remember Blade from back in the day, and the crowd cheered upon hearing his name.

The Pet Shop Boys ended the night with a few classics like ‘It’s a Sin,” “Left to my Own Devices,” “Domino Dancing,” and finally “Always on my Mind (Brenda Lee cover).”

More Photos of the Pet Shop Boys at the Microsoft Theater! 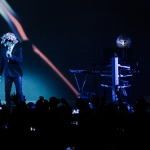 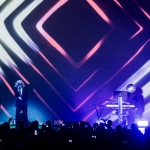 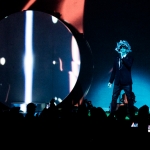 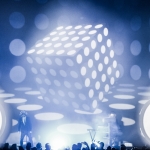 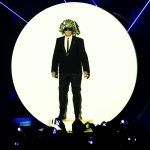 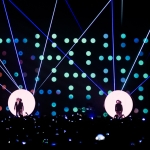 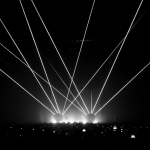