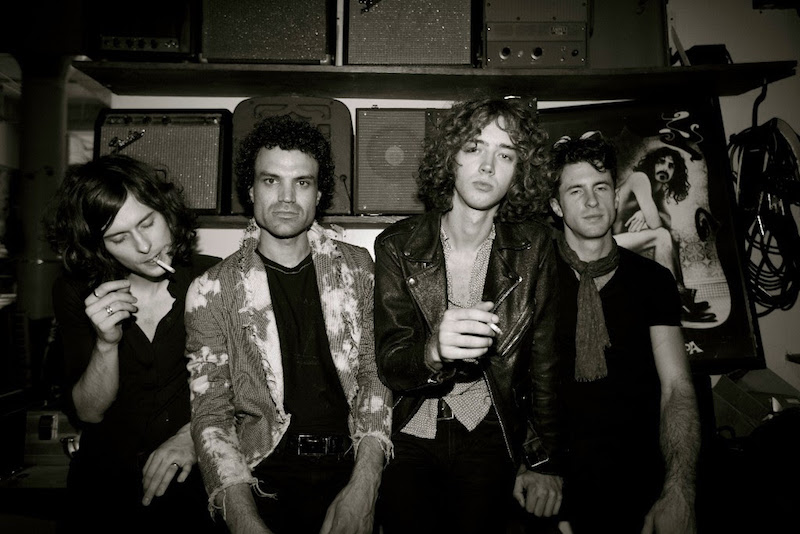 In the land where jangly guitars and 60’s psychedelia have latched firmly onto the sound of what seems nearly every band is producing, Los Angeles newest addition Warbly Jets espouse unfiltered, against the grain rock that gleefully trades the nostalgia of yesterday for a face-melting tomorrow. Unsigned, with only one sizzling single to show, and wielding a hefty promise to deliver pure bombastic rock ‘n’ roll, the fiery four-piece, comprised of Samuel Shea, Julien O’neill, Dan Gerbang, and Justin Goings, might appear to be sitting on the precipice of a career with limitless possibilities–but that hasn’t always been the case. Like many just starting out they had little to no money in their pockets, forcing them to couch surf and motel jump their first few months until they could find a secure studio place to record.

As O’Neill so eloquently put it, those early days were filled with “slogging through shit,” and the band was held together on an insatiable focus of will power, Light Blue American Spirits ©, four dollar breakfast burritos from Rainbow Acres Market on Washington Blvd, and a weed delivery service Shea found. Just when things started coming together for them, Shea was involved in a bad motorcycle accident that left him with a fractured wrist and forearm; wondering if he’d ever play an instrument again, the band persevered through a cathartic production of “Alive.”

“It left me feeling like my hand had been ran through a meat grinder,” Shea said of the crash. “It was the final straw in the “against all odds” motto that set in heavily for us during and after my recovery.” For O’Neill, it was a huge refocusing in their mad dash towards completing a record: “We had to de-group and regroup simultaneously. Writing music by mail, colluding by phone. Devising a plan to hit the ground sprinting when we came back together.”

The urgency of their situation left little to no time for Warbly Jets to become a scene band or to replicate the nostalgia of another era, they didn’t want you to hear their songs and perk your ears because they sounded like a band you liked–to them, reinvention is simply regurgitation, and they wanted to be more than that.

“Our sound isn’t washed out memorabilia,” O’Neill said of their music. “It’s the collectible figurine you keep in the package so you can pawn it 30 years down the road.”

Not the biggest fans of the 60’s psych resurgence emerging in Los Angeles today, Warbly Jets have never felt that they fit at all into the city’s bustling music scene; embracing that, rather than finding discouragement in it, has allowed them to carve out their own niche. “We sound like what it feels like to be shot out of a cannon at the top of Mount Everest,” Shea chimes in, and his assessment isn’t far from the mark. Their only single out right now, “Alive,” is rock injected straight into the vein, melding all the grandiosity of massive guitar-driven melodies with droning vocals and synth supplements. To O’Neill, their hustle is easily surmised: “We don’t attempt to push the envelope, we burn it and send everyone an email instead.”

“We have simply put in the time. We’ve banged our heads against countless walls, written hundreds of songs, rehearsed for hours and hours,” explained Shea of the process they’ve undergone in honing their sound. “It hasn’t come easy, but as they say, ‘Do what you love and you’ll never work a day in your life.'”

The Pixies, Cage the Elephant, Wolf Alice — like these — Warlby Jets embody that penchant for rock that is untouched by commercial meticulousness. For Shea and O’Neill, their influences range from The Who’s late drummer Keith Moon, Brian Eno, and 60’s blues master Howlin’ Wolf, to contemporary ones like The Kills’ guitarist Jamie Hince and The Horrors‘ synthesizer/keyboardist Tom Furse. Far and in between, the difference between Warbly Jets and other bands pining for the days in which their idols reigned is that they don’t impregnate their sound with hankerings of yesteryear. Their influences are felt, not so much heard, and when they are heard, they come as the subtle outlines of a melody or in composition and arrangement; not as entire riffs or in lyrics filled with imitative buzz words, so oversaturated with wistfulness that any applauses for it sounding like [insert decade and sub-genre] rock are damning indications of unoriginality.

“Our goal has always been to blend our influences from the past with today’s technology instead of just recreating the jangly guitar music that was perfected by countless bands five decades ago,” Shea explained. “This hasn’t necessarily given us the most obvious fast track, but we never gave a damn about being a scene band anyway.”

As the Los Angeles natives they are, Warbly Jets’ sound might not fit the mainstream mold of the city, but they do owe much in the way of their existence to it. At a gig at Harvard and Stone they met future friend photographer Kristin Cofer and at one of their earliest shows they were discovered by their current manager.

“The city itself has been a beacon of creativity,” O’Neill admitted. “It’s offered up all of its delicate delights and shoved them in our pockets, giving us the freedom we needed to excel. We’ve been very lucky.”

“In comparison to NYC it’s offered us a new level of personal freedom that gives us more of an opportunity to create, and the parties are better,” added Shea.

Warbly Jets have been doing a high-stakes tightrope act since their inception; whether its balancing the timelessness of the old with the ingenuity of the new, or artistic liberation with better parties. Just as they sing through the blistering wall of guitars on “Alive,” they’re alive, reborn out of the ashes of their own tribulations, soundtracked and affirmed by their own voices and not shouted from the shoulders of others. Warbly Jets aren’t apart of rock’s reincarnation–they’re with its second coming.

Warbly Jets just finished a U.S. tour with Mystery Lights and are kicking off the new year with a January residency at The Satellite. All five residency dates will take place every Monday this January and are free to attend. A remix version of “Alive” will be released around the time of their residency.

For more updates, including information on their yet announced debut album and tour dates from the Warbly Jets, visit their website and Facebook .