“To the ends of the earth would you follow me?/There’s a world that was meant for our eyes to see.”

With such an invitation, Lord Huron kicked off the first of five sold-out nights at the Teragram Ballroom in their hometown of Los Angeles, playing to the packed venue filled with fans who’d been waiting what felt like decades for the band’s return. As Ben Schneider’s brainchild, which began in LA way back in 2010, Lord Huron may have started ingrained in the budding movement of indie-folk that was burgeoning at the time–but after the release of Strange Trails in 2015, the group began to take on a Western-tinged rock sound that truly flourished in their live gigs. They’ve played on massive stages at music festivals across the country where their ever-growing sonics have been tried and tested, but back in their hometown and playing the humble confines of the Teragram Ballroom, borrowing its isolated intimacy, Lord Huron lit a fire in our feet and bellies that just couldn’t be put out.

“Maybe some of you don’t know this, but we’re from here,” Schneider told the crowd, who screamed in praise back. “When I first moved here I felt like a tourist. I didn’t have any plans to stay, but then I sat on a barstool…and now here we are.”

And here they were indeed, a full-fledged band that had gone from indie-folk sweethearts to an ever-raging blaze of folk-rock. Opening the night with the singed rumblings of “The World Ender,” interspersed by Schneider’s high-pitched yips and yawps, before diving into the rollicking folk-odyssey “Meet Me in the Woods,” Lord Huron promised not to give the crowd just a run-through of their typical setlist. Citing the fact that they had five nights at the Teragram, Schneider told the crowd that they had room to experiment a bit and play songs they didn’t usually play.

Live, Lord Huron isn’t your traditional indie-folk band, their sonics are loud, their trio of guitars rip and roll with large walls of sound that provide a rhythmically droning backdrop for Schneider’s croons, and nearly every finale to their songs features some serious shredding. On “Hurricane (Johnnie’s Theme),” Schneider pulled out an almost comically miniature guitar, introducing it to the crowd, “This is my tiny guitar, I call him ‘Little Ripper.’ He calls me ‘Daddy.'” With that they tore through the electric chorus line and melody of the song (“Oh little darlin’ don’t you look charming/Here in the eye of a hurricane.”), shredding their way through as Schneider jumped, spun, and shook wildly onstage, stopping only to howl into his microphone.

Explosive isn’t a typical way to describe a band like Lord Huron, but there’s truly no other way to put to words their live show antics; whether its on his acoustic or electric, on a slow jam or foot-stomping howler, Schneider pours such sweltering passion into every note he executes that it’s hard not to marvel at how much he’s enveloped by the music.

That isn’t to say they don’t do folk–they do, and they do it better than most. Schneider’s lyrics aren’t just buzz-word filled tunes that pinpoint the pining listeners might have for wandering through the wilderness; each one is a transformative journey or lilting narrative, not just a stringing together of choice adjectives or nouns. As part of the array of songs that they don’t usually play, the heart-wrenching twinkle of “The Night We Met” twirled through on the soft murmurs of Schneider and company’s crooning, and engulfed in the voracious intimacy of the Teragram, the crowd hummed along to the song’s sad tale.

Whether it’s “Time to Run” or “Fool For Love,” Schneider paints delirious portraits of characters who live, breathe, love, dance, and die all within the breadth of a single song. The latter was what we were left with at the end of the night, the final song of their encore that the band seemed almost reluctant to let go of, as after every hammer-on finale Schneider dived right back into the chorus one last time. It was a quaint but fitting note to leave the crowd with; the heart-crushing futility and damningly foolish perseverance of love, of hope–it’s what Schneider and company lace their subtle dirges with. Bringing the endless wilderness that inspires them, so burdening in its largess, to the Teragram Ballroom–you couldn’t help but feel small, to feel the need for another soul to make it feel less empty–and sometimes you need to fight tooth and nail for it. Sometimes you win, sometimes you die, but you never really lose.

Experimental rock piece LA Takedown opened the night, building a deep contrast between Lord Huron’s folk tunes with the eerie atmospherics of their electronic build-ups. A large music collective that was begun by Aaron M. Olson, the group couples the wailing drones of its electronics and minimalist guitars that takes its LA creators back to an era of the city’s retro, sci-fi fascinations. Easily used as a soundtrack for the vintage futurism of films like “Blade Runner,” LA Takedown is at once cinematic and immense in nature, utilizing their slow build-ups to edge the crowd toward dizzying sensory overloads.

LA Take Down at Teragram Ballroom — Photo by ZB Images 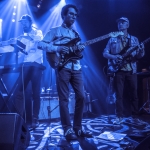 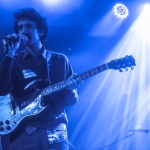 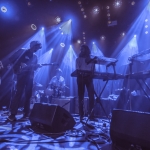 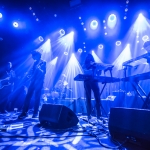 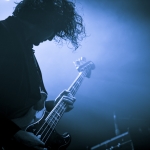 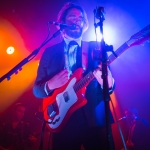 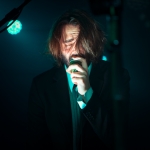 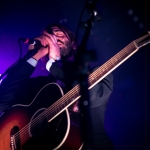 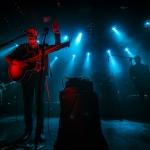 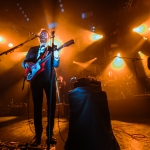 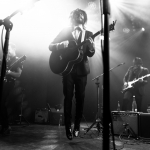 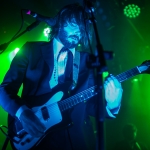 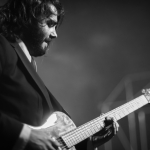 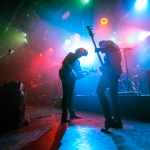 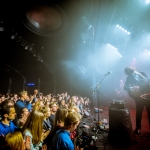 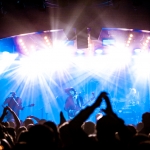