Sam Herring is a dynamo of unbridled delirium. When you walk away from a Future Islands concert–no matter how many times you’ve seen them live–you’re still left with your mouth agape. There are very few frontman who are as animated in their gesticulated expressions as Herring and while they were prepping for their Coachella appearances Thursday night with a gig at the Roxy, it’s without a doubt that the trio thrives in a sweaty, crowded bar setting. Cutting the proverbial rug onstage, the night also happened to coincide with Herring’s birthday which was celebrated with a crowd-led singing of “Happy Birthday” to the 33-year-old singer.

For not one second the entire night did Herring find himself immobile, punctuating every howl and growl with furious kicking, dancing, body-rolling, and wild-eyed contortions of his hands and face. Herring has always resisted the pigeon-holing involved in calling Future Islands a synth-pop band, instead preferring to see themselves as a post-wave combination of new-wave and post-punk. When you get to witness the driving power of Herring as he wraps himself in the inflammatory energies of his grappling with melancholy and joy, it’s hard not to see those rowdy punk sentiments come through. Yet, while their songs might just be elegant dirges sung to the tune of kinetically cheery drums and synthesizers, Herring minces no words in that ever constant offering of hope that he never seems to let go out. At their live shows, he often gives short tidbits about what the upcoming song is about or dedicated to, as due to his sometimes incoherent singing tactics the lyrics for songs can be hard to grasp–but little is lost in translation when coupled with his aggressive movements.

Fans who got to the sold-out show early managed to nab spots right in front of the stage, an area that Herring is known to frequently attack. One minute he’s dancing center stage and the next he’s winding up his arm and rushing to the edge of the stage in a furious dash–suddenly he’s right in front of you, inches from your face. Anything but shy, Herring will walk the edge of the stage holdings hands and reaching out to point to specific people in the crowd as he sings a few lines directed at them, but perhaps the most unnerving and potent of his habits is the unbreakable eye contact he has with the crowd. He has a way of staring into you that doesn’t seem trite or casual, all the intensity of his gaze lets you know that it isn’t a coincidental moment of eye contact and that he’s purposefully staring at you and every person in the crowd. Herring almost flips the entire setup of the performance on his head, you think you’re a crowd of people watching one man perform his art, but in reality, maybe he’s one man watching you find catharsis in his art.

Midnight Sister opened the night with their collection of synth-rock tunes, a lush group maintained by duo Juliana Giraffe and Ari Balouzian. Giraffe, having been raised on disco and David Bowie, lets her tastes dazzle in grandiose and mysterious cinematic fashions. Even dressed as a mime and mimicking all the movements of such therein — Giraffe wasn’t all spectacle and the band’s use of electrifying guitar solos, backing instrumentals like trumpets and saxes, and carnivalesque synth melodies stroked the crowd’s intrigue song after song.

Midnight Sister at the Roxy Theatre by Steven Ward

More Photos of Future Islands at The Roxy 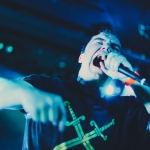 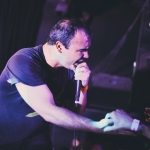 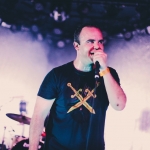 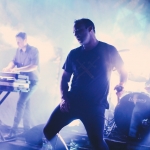 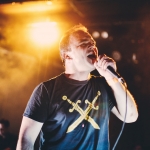 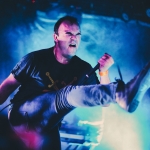 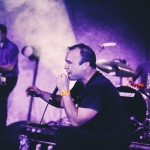 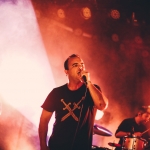 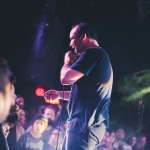 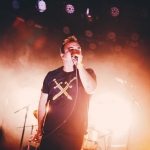 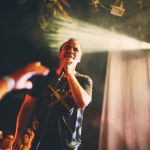 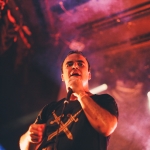 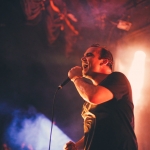 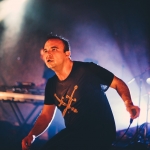 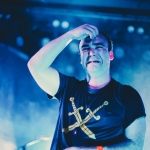 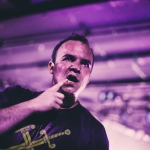 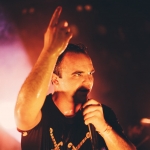 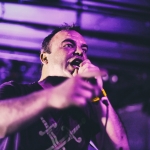 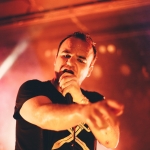 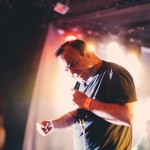