Arroyo Seco Weekend’s final day had the incredible task of topping the previous night’s legendary appearance by Tom Petty and the Heartbreakers–and it had to do it in the ninety-degree heat to boot. But with it’s most stacked lineup of artists at the ready, Sunday was the impressive finale it needed to be for the festival’s inaugural debut and left fans hoping for its return. Those that were returning from day one were noticeably tired and although attendance seemed larger earlier in the day than it did at the same time on day one, it was apparent many were taking things much slower by opting for water over alcohol in the afternoon sun. With plenty of cold treats–like the elusive churro sundae, which sold out just as The Shins took the stage–and drinks like fresh squeezed lemonade, Arroyo Seco had exactly what was needed to remedy the summer heat.

Early performers on day two braved the swelter as much as the fans, with radio friendly performers like Rachel Platten and Andy Grammer drew large crowds despite the sun’s rays beaming down on their sets. For a lineup that was greatly focused on artists that fell under the umbrella of indie and alt-rock groups with deep cult followings, the Platten and Grammer might’ve seemed out of place, but their impassioned performances were not. Platten’s stage was a mix of casual fans and frantic pre-teen and teenage girls accompanied by their families–and even if you weren’t a fan, the latter group’s unapologetically loyal knowledge of every word of Platten’s songs and their unabashed excitement really left you smiling. Not to mention her cover of Swedish House Mafia’s, “Don’t You Worry Child,” was a moment of involuntary goosebumps. Grammer and his ensemble of charismatic guitarists took the bulk of the midday heat in stride on the main stage but rallied his fans against the budding romanticisms of songs like “Fine By Me” and “Keep Your Head Up.”

Fitz and the Tantrums were the last act to face the heat on the sun-facing main stage, but there was really no better act the entire weekend that could convince fans to move their asses in such absurd temperatures. Michael Fitzpatrick and Noelle Scaggs never fail to light a fire under the feet of those in their crowds, edging them to get involved in moving any part of their body they’re willing to. Clapping, dancing, singing along to their endless collection of indie-dance hits, even those seemingly glued to their lawn chairs got up for a song or two to swing their hips to Scaggs tambourine. Like moving from the fiery, danceable hits like “Out of My League” echoing across the green to the cool serenity of Andre Bird’s folk tunes drifting out from under the shaded canopy of the Sycamore stage, eventually the day’s heat faded. As sunset approached the festival grounds took on a much more enchanted atmosphere as the trees began to light up with strings of light bulbs and colorful neons, with the glow of the Oak and Sycamore stage creating a backdrop in front of which families enjoyed their picnic baskets and ice cream. Children sat on parent’s shoulders as they waded through the growing crowds and couples lounged on blankets as once again Arroyo Seco Weekend became this cozily homey setting.

in the midst of this Arroyo Seco Weekend’s final performers took to the stage to try and give fans a finale worth the sweat spent in the heat and while nothing was going to truly top Petty–when else were you going to be able to say you saw Weezer, The Shins, and Mumford and Sons back to back? Giving the weekend a dose of their personal weirdness, Weezer came out dressed in an odd homage to Guns N’ Roses, with Rivers Cuomo dressed as Axl Rose and Brian Bell donning the iconic hat of Slash. It was a funny quip that Weezer (dubbed “Weezer N’ Roses” according to the patch on Cuomo’s white jacket) flaunted in seriousness as they opened with “Hashpipe.” A band with a discography so long, you’d be forgiven for forgetting how much of a guitar-driven band they are–their incessant shredding as much a core value as Cuomo’s humorously off-kilter lyrics. For Weezer, even the deep cuts are hits and their frenetic collection of fans went berserk with every opening note–their outfits a knowing, self-deprecating and ironic nod to their enduring rock-star spirit, even if they don’t sell out stadiums like Guns N’ Roses might.

The Shins at Arroyo Seco Festival shot by Danielle Gornbein

Over on the Sycamore stage, The Shins played into the magic of sunset, bringing out a dizzying array of neon lights that made the stage look like a glass prism of rainbows from the distance. Coming out with an overflowing beer in his hand and as cheery as ever, James Mercer appeared more excited than even the crowd (and we all amply lost their minds when they stepped out) and it showed throughout their opening songs as he moved around the stage smiling at his bandmates. Opening with, “Caring Is Creepy,” and diving into the giddy strums of, “Australia,” Mercer is one of those performers that come out to do one thing and one thing only: play his songs and to play them well. With a stage crowded by his current touring lineup and the colorful backdrop of their album Heartworms glowing behind them, The Shins buoyant range of indie-folk and electrifying dream-pop songs bring out blissful elation like no other. Mercer’s croon is a spine-tingling thrill alongside their crisp riffs and bouncy rhythmics–one fond moment I’m sure I share with others is hearing the sound of those ecstatically springy guitars and the piano twinkle of, “The Rifle’s Spiral,” reverberating across the grounds and through the trees as the sun fell.

Finally dark out, the evening was ready for Mumford and Sons close-out performance for Arroyo Seco Weekend–and the anticipation could not have been more tangible. Soundchecks with the band’s banjo and double bass were already drawing screams from the crowd and after an anxious opening that featured a voice that sounded like the Haunted Mansion narrator reading an excerpt of T.S. Eliot’s poem, “The Lovesong of J. Alfred Prufrock,” to an eerie but sensual beat–it might sound more trite than it actually was, but the sincerity and beat set the tone of the band’s moving set. A folk band in the fullest sense of the word, hailing from across the pond, Mumford and Sons were the perfect foil to Petty’s Americana, heartland-inspired brand of rock. Both weave deep narratives with their songwriting and conjure up iconically original images of the things that so deeply inspire them. Live, Mumford and Sons songs, from their early indie-folk, foot stompers, to their more recent step towards introspective rock, the large ensemble centered around Marcus Mumford is anthemic, to say the least. Playing pretty much everything Sunday night, the band balanced their banjo brandishing folk tunes with electric guitars and the haunting poignancy of songs from their last album Wilder Mind; from which songs like, “Believe,” and, “Ditmas,” were eviscerating tellings and as bombastic as ever. Very much a band that is unfairly tied to the saturated folk-genre that blew up in the late 2000’s, Mumford and Sons is a band that has matched its evolution in the studio with a revamping of its live performances. Much like the threads of Arcade Fire and Of Monsters and Men, their live sound is immense and is as much at home on the main stage of a festival as it is in a stadium. From the powerful chorus line of, “Babel,” to their choice finale in, “The Wolf,” Marcus lead the night with his hoarse and brazen howls, wrapping up the grandiose nature of their ensemble into an intimate and manageable moment with his words.

The Shins at Arroyo Seco Festival shot by Danielle Gornbein 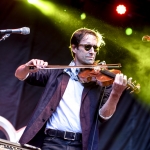 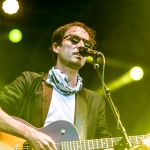 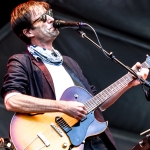 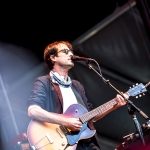 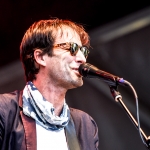 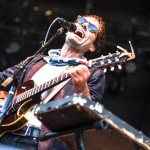 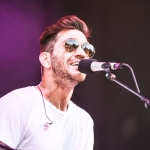 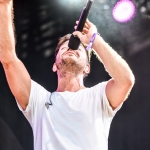 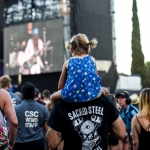 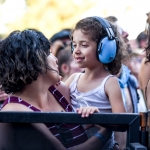 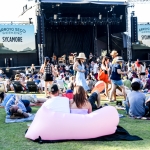 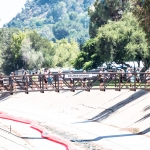 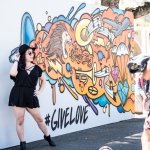 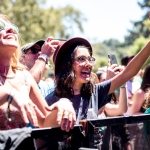 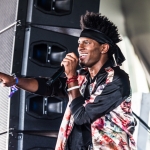 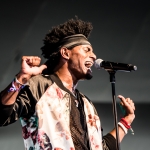 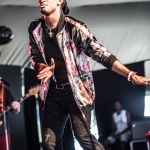 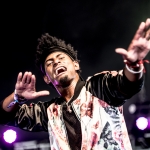 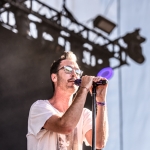 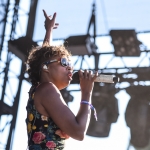