Jaws of Love at the Masonic Lodge by Steven Ward

Kelcey Ayer revealed his solo side project Jaws of Love to a sold-out crowd gathered in the dimly lit Masonic Lodge at the Hollywood Forever Cemetery, playing songs from his debut record Tasha Sits Close to the Piano. Known as one of the core members of indie-rock band Local Natives, Ayer’s project has been years in the making but was actually recorded in a flurry of sessions both during and after the band’s touring for Sunlit Youth. An emotively intense collection of ballads, each texturized with his love intricate soundscapes, Jaws of Love could’ve found no better venue within which to unveil such intimate pieces. Draped in the warm glows and white lights of the Masonic Lodge, Ayer let his luminous croon empty itself into something breathtakingly tangible, brought further to life with every layered piano melody and dreamy synthesizer interjection.

Far from a minimalist, Ayer’s inclination towards atmospherics in his songs lends itself a complexity that’s reflected in his allure with slow-burning growths and a kinetic grappling with love. “Jaws of Love,” the album’s intro, opens modestly enough before escalating into a lucid fraying of such discordantly melodious synths, keys, and murmurs. Tucked inside the lodge, Ayer’s sonics hung in the air filling every inch of space between the bodies sitting there and his own; crackling with a tender electricity that left you anxious but hushed. Songs seemingly stripped down to only his euphonious howls and piano keys, as in the bleak silhouettes of “Microwaves,” even grew into engulfing shadows of layered crescendos. It was easy to lose yourself in the inviting web of sublime melancholy that Ayer was narrating, even without the lilting melodies to go with it–his little personal parables of the inconspicuous ways love maneuvers through the grooves and cracks in our daily lives was magnetizing. Earnest but delicate, like in the harmonious echoes of “Costa Rica” or his leading us by the hand through “Before the Hurting Lands,” Jaws of Love seeps into all the nuanced chips in the armor we tend to forget are even there.

Atmospheric singer Combat opened up for Jaws of Love with his heady concoctions. Later joining Ayer onstage to assist him with his set, the LA-based artist operates in a vein of beat-driven electronics–one that pumps bass as affectionately as a ballad might a piano melody. Giving the crowd first a taste of strictly instrumental pieces, Combat then fleshed out his songs by injecting his grating baritone vocals into the mix.

Jaws of Love at the Masonic Lodge by Steven Ward

Combat at the Masonic Lodge by Steven Ward 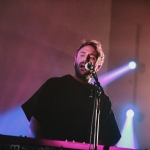 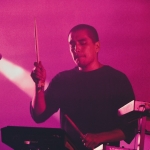 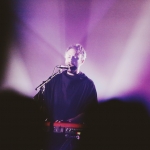 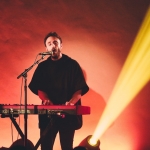 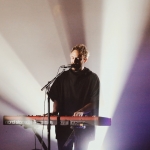 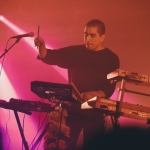 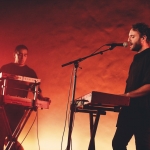