Wednesday night was a true party over at the Hollywood Palladium. The incredibly energetic duo Matt and Kim made a stop on their current tour! Getting the room warmed up were TWINKIDS and Cruisr. First up were TWINKIDS – the electro-pop project of pianist-producer Matt Young and Tokyo-native singer-songwriter Gene Fukui.  The LA-based duo proved to the audience that they belong on a stage in front of a listening crowd. Their music seems to blend different genres together in a beautiful way and offers insight into their minds. They performed songs off their debut EP Boys Love, which was released last summer via Om Records.

Next up was direct support, CRUISR. This Philadelphia-based pop band got the crowd moving even more. They’re energetic as hell and demanded the audience to get just as excited with them. Performing anthemic songs off their two EP’s, Cruisr served some serious 80’s pop vibes.

Once the openers came and went, there was nothing else to do other than get the party really started with Matt and Kim!

Lights went off and a brief and quirky introductory video got everyone’s attention. The video was in the form of a flight preparing for takeoff and warning that there were no belts to buckle so you better find a friend to hold on to.

Once the screen went black, loud music blared as the power couple stormed the stage.

Fans went absolutely crazy cheering and losing their minds for Matt and Kim. It’s been a while since we’ve seen them perform due to Kim being hit with a knee injury and 9 month recovery thereafter. You could basically forget that even happened because she was back and louder than ever! Taking position in front of her drum kit, she began throwing it down. The two blasted got things fired up with the effortless sing-along “Hey Now” off their most recent record New Glow. We also got to hear their two latest singles, “Happy If You’re Happy” and “Like I Used To  Be”, which show us just the stuff we like from them. Your typical crazy house party consisted of Kim drumming with giant eggplants and fans being thrown unblown up balloons whilst being instructed to blow them up and toss ‘em around. Matt and Kim are truly their own hypemen. It’s so cool to see a couple taking a stage by storm and proving themselves in this industry. They’ve shown over the years that their infectious entertainment is here to stay and we couldn’t be happier. 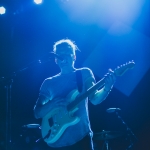 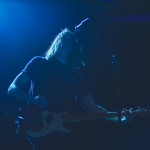 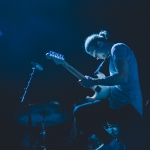 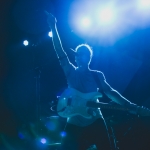 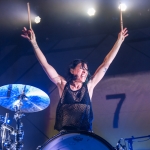 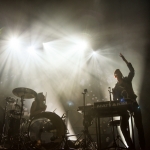 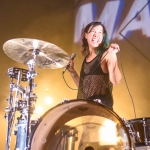 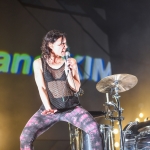 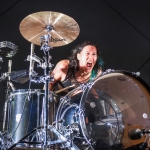 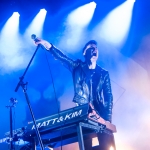 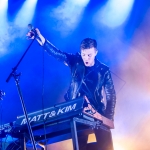 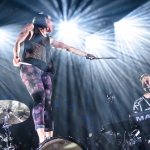 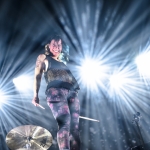 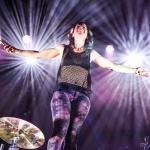 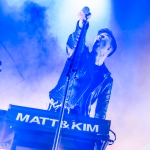 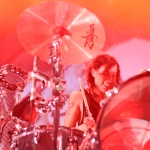 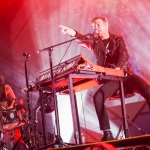 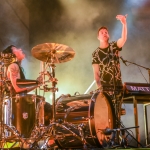 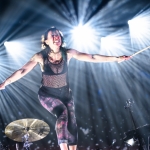