Wayne Kramer has been kicking out the jams for 50 years and to celebrate he gathered some pals like the good old days in Detroit basements to play some music. The show at the Ford Theatre this past Friday was part 50-year-anniversary of MC5 (MC50 at this show) and part benefit concert for Jail Guitar Doors. The project, named after a Clash song and started by Billy Bragg to honor Joe Strummer, is a prison project which helps rehab inmates by providing musical instruments to let them grow through music.

Americana band, Jason Heath and the Greedy Souls, opened the show. Their songs were sewn together with lyrics with a message of protest against things like racial injustice and oppression.

Starcrawler was up next and they definitely were feeling out of place in a room filled with many people old enough to be their grandparents. The band did not react well to the seated audience hurling insults like “Oh, come on turn on your hearing aids” and “Don’t worry we will have you back at the old folks home before 9:30.” Lead singer Arrow who plays up a deranged woman stage act said in a moment of truth perhaps, “I love LA, but not tonight.” They made the most of it and Henri Clay”s abilities fit right in with the guitar legends that would be following him later in the night.

Editors note: Know your fuckin’ place, kids. RESPECT. You should be so grateful to grace the same stage with members of MC5, Fugazi and more. You clearly have no idea what other legends and those within the punk and activist movements were in the crowd.

Margarette Kramer (Wayne’s wife) and Ken Heartman, a man who had benefited from Jail Guitar Doors explained how terrible the prison system is in the US and how it incarcerates more people than any time in history. The crowd jumped to their feet as he announced it was time to “kick out the jams” and Wayne came out with his signature American Flag striped guitar dressed all in blue. Wayne stood out from the rest of the guys in black: Kim Thayil of Soundgarden on guitar, Matt Cameron of Soundgarden and Pearl Jam on drums, Brendan Canty of Fugazi also on drums (there were two kits), Billy Gould of Faith No More on Bass, and Marcus Durant of Zen Guerrilla on vox, harmonica, and the teeniest saxophone ever.

Later Duff from Guns and Roses would join the gang as would a three-piece horn section and a rapper. They were clearly out to have a good time and much jamming happened. Things got weird as they announced “Next Stop Jupiter” which led to the jammiest-guitar-nerd moments ever. Wayne was dropped blazing guitar solos all over the stage, all night long and battled a bit with Kim Thayi in some fun back and forth guitar dueling.

Wayne ended the night with another call to arms to fight the republicans stealing the power given to the people by the framers (of the constitution). He then lead a chant to “VOTE VOTE VOTE” and called for everyone to take action, get to work and to let the “bums in Washington DC” know that “we are looking at you.” 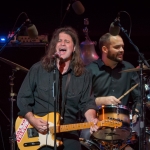 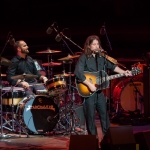 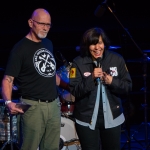 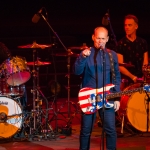 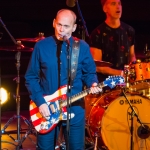 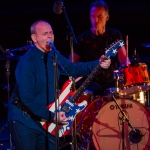 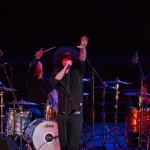 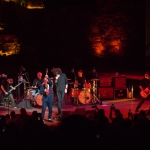 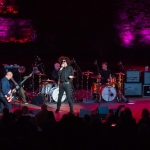 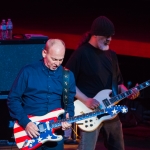 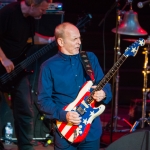 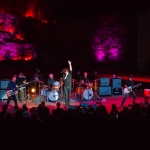 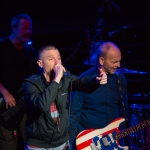 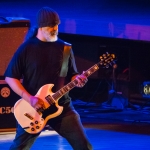 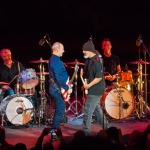 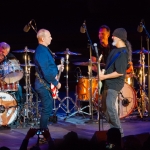 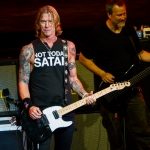 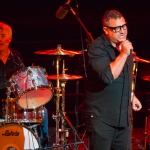 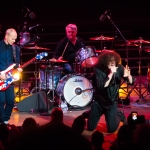 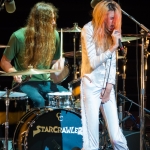