Black Moth Super Rainbow made a second appearance at Lodge Room Highland Park Saturday night after selling out their Friday show. Supporting their May release, Panic Blooms, the Pennsylvanian act – singer Tobacco, synth players The Seven Fields of Aphelion and Pony Diver, bassist Steve SLV, and drummer Iffernaut – drew a crowd as eclectic as their names. There was even a young child sleeping along the wall.

Black Moth Super Rainbow sounds like listening to psychedelic electronic music under water. Their unique lo-fi sound conjures images of refracted sunshine dancing on skin below the surface of a swimming pool. This is largely due to frontman Tobacco (also known for his solo work) exclusively singing through a vocoder. But beneath this veil of summertime simplicity lies something darker. As with much of the best pop music, Black Moth Super Rainbow  juxtaposes radiant and joyful melodies with dismal lyrics. The first true LP since 2012’s Cobra Juicy, Panic Blooms, continues this trend in their work. In fact, a press release announcing the album described it as an “f-ed up and bleeding account of depression and the shadow side of human frailty.”

And live in the shadows they did. Sandwiched between two layers of projection screens and shrouded in near total darkness, the musicians sole purpose was scoring the visuals. The drummer wore a ski mask; nobody ever addressed the crowd. It was purely music and the weird, projected world we lived within for the duration of the set. From video of an endoscopy and rotting teeth to more calming shots of the woods (until what appeared to be an anthropomorphic owl crossed towards the camera), attendees where forced to take in the visuals by Kevin Jackson. I doubt anyone minded. 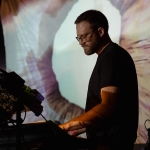 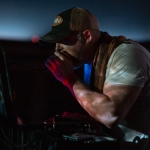 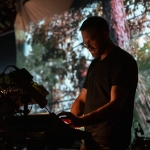 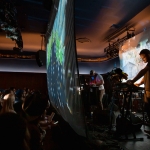 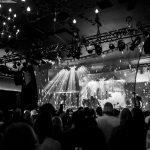 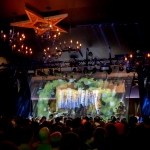 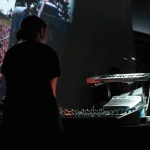 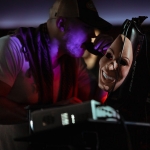 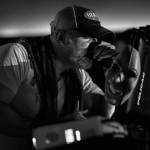 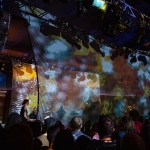