The beautiful Palace Theatre in Downtown L.A. sold out two consecutive evenings with the lovely Angel Olsen. Friday night was the second of the two and my oh my was it gorgeous. Once the lights went down, Olsen and her band took the stage and began the show. Starting things off with a bang, they opened with “New Love Cassette” off the new record. The tour is in support of the fifth record, All Mirrors, which released this past October via Jagjaguwar. It seems that each album Olsen puts out, she truly develops newer and richer sound than before. Angel Olsen’s amazing songwriting ultimately shined through this new work and without a doubt, she instantly mesmerized the theatre.

The crowd stayed so attentive throughout the night, while Ashley and her band truly gave a stunning performance.While nursing a glass of white wine, Olsen seduced the audience with her slow and captivating gaze. She’d look out and spot each and every person looking back at her with awe and just let out small giggles.

With Angel Olsen’s well-known half bee hive hairstyle and ever-classy wardrobe, she continued to swoon while giving off some sweet synths from her keys. At one point, a fan even shouted “You give me ASMR!” to which Olsen quirkily replied “Sweet baby child, I’ve never given anything to anyone. Whatever I can do for you..”

It wasn’t a totally rehearsed set, even though she did take the time to mention how she doesn’t think she and her band truly knew what they were getting into by adding “thousands” of instruments to the new record, when eventually realizing they’d have to figure out how to do that live.

In between the lengthy songs, Angel Olsen would go into her silly banter and ask if everyone was doing alright in their velvet seats. The special evening kept on when her band left the stage and she decided to play a few songs on her own. She took to a beautiful grand piano and simply took our breath away with a stupid good rendition of her song “Pops” off her junior effort, MY WOMAN.

The Palace Theatre remained enamored and cheered for more as she inevitably left the stage. Olsen and her band did come back to give an encore. She apologized for saying that she and her band lied when they said their previous song was their last. We were quick to forgive as she invited her friend Mark Ronson to the stage to perform their collaboration, “True Blue.” It was a remarkable end to an already perfect evening. 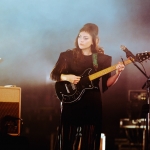 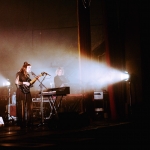 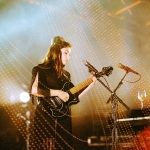 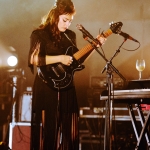 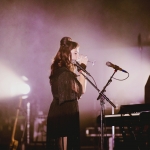 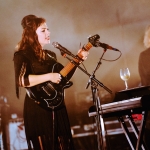 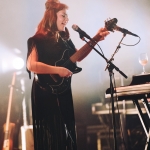