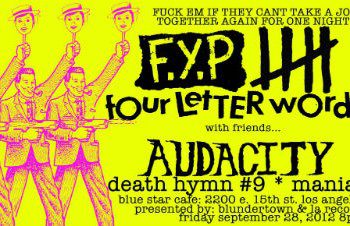 Torrance/San Pedro punk rockers F.Y.P (aka Five Year Plan) play the Blue Star Café on Friday, September 28.  In their most recent incarnation/lineup they are known as the band Toys That Kill but they’re taking one more trip down memory lane so all can relish in the songs and albums that brought them to where […]