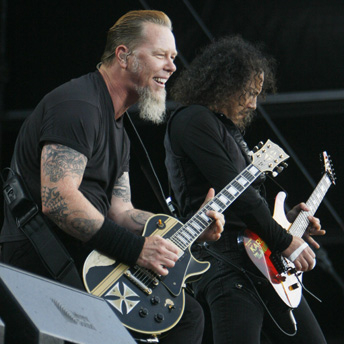 I so have a love / hate relationship with Metallica. Love their old shit, loved their performance at the 2006 Download Festival in Donnington, England but I hate their napster drama and I hate their recent blogger drama. Apparently after a listenting party on their new album, Metallica bitched about all the reviews that were written on their album over the net. Which for the most part were all positive reviews. Anyhow, they made everyone remove the reviews. I swear, I’ve never known a band more afraid of the Internet.

On a good note, Metallica has named their new album set for a September release: “Death Magnetic.” Produced by non other than the man, Rick Rubin.