Are roadies slacking or thieves getting smarter? Whatever it is, shit’s lame. First Iron Maiden, then Iggy and The Stooges (they lost a shit load of equipment) and now REM. Guitarist, Peter Buck is the latest victim to have their equipment stolen from some wankers these past couple months. Stolen at a Finnish gig on Tuesday, good ole Pete’s Rickenbacker 360 guitar ceased to exist the moment he finished his set. 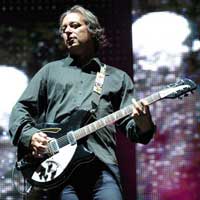 “Needless to say, this instrument means a great deal to Peter and to REM,” the band said in a statement. The guitar made its debut on REM’s 1982’s single Chronic Town, and Buck was still playing it on this year’s Accelerate. Now the band are simply hoping to get it back.

“It is our sincere hope that whoever is responsible for the loss, or whoever has information which can help recover the guitar, will come forward to receive a generous reward, no questions asked,” they said.

I just don’t understand how this shit happens, careless hands or an inside job. Time to call the Rock n’ Roll gestapo and put that shit on big brother stat: the man is watching.