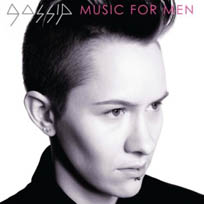 Hot damn! Looks like the Gossip teamed up with acclaimed producer Rick Rubin for their fourth album “Music For Men.” The album exudes a fun mix of discos beats, not too heavy on the electro, with a healthy punk presence. If “Fame” were to be brought back to the big screen (which I think it is), the Gossip would be a perfect addition to their soundtrack. Beth Ditto has the vocals of a soul sista, while drummer Hannah Blilie and guitarist Brace Paine keep kickin’ out the jams!

I dig their first track “Dimestore Diamond.” It’s sexy and sassy–the kind of song you want to swagger down a catwalk to while ripping of you clothes piece by piece. On the opposite end, their 12th track “Spare Me From The Mold” is very high energy and full of punk rock rifts and yells. Definitely two of my favorite tracks.

With the success of 2006’s “Standing in the Way of Control,” I’d say it’s a job well done from the Gossip and their new goods “Music For Men.” Listen to it at spinner.com.

One thought on “Gossip – “Music for Men” Album Review”