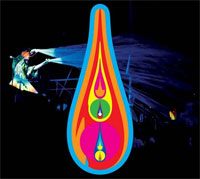 Bjork’s new album, “Voltaic” off Nonesuch was played non-stop on my iPod the past couple days. Filled with an awesome mix of eclectic beats and soundscapes, Bjork holds true to her avant-garde style for which we all know her for. Sifting you through different moods and emotions through out her strong, expressive vocals, you won’t endure a single boring moment on “Voltaic.” Unlike the not-so-pleasing swan dress she sported at the 2001 Oscars, “Voltaic” is a beautiful, eccentric piece of work that will grab attention for all the right reasons.

If there’s such a thing as tribal alien dances out there in one of the planets in this crazy universe, “Innocence” would be a perfect theme song. The background beats and mixing sound a bit like a sacred chant, while the cosmic echoes and build up give the song an intergalactic feel. A throwback to 95’s “Post,” the popular song “I Miss You” comes back to life through “Voltaic” and it’s pretty damn sweet. Oddly enough, it has techno beats fused with a late 20’s’ big bands sound. Again with “Earth Intruders” it gets a lil tribal, with some chanting, or what have you. Dope song! But “Declare Independence” takes the gold for me. It’s just fuckin’ bad ass! Dark with some hardcore beats and sent with a political message, the song is just killer!

Check “Voltaic” out in all it’s entirety at NPR.org.