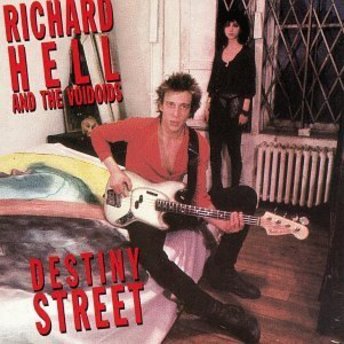 I used to love Madonna’s 80’s flick “Desperately Seeking Susan” and the hot bits of Richard Hell in a few scenes. As early as eight years, you can say I was already into the “bad boy” rocker. Some things just don’t change . . .

As part of some great iconic punk bands such as Television, The Hearbreakers and The Voidoids, Richard Hell is revisiting his 1982 album “Destiny Street” from the infamous band Richard Hell and The Voidoids. As the follow up to the group’s famed album “Blank Generation” it also was unfortunately their final release.

“At the time of the original recording I was so debilitated by despair and drug-need that I was useless,” Hell says in a press release. “The record ended up being a high-pitched sludge of guitar noise. It was a shame because the songs were clean, simple, and well-constructed, but those values were sabotaged by the inappropriate arrangements and production.”

Some of the best albums were put out while musicians we’re high on drugs, and for some, pretty damn strung out. Revisiting an album with a whole new crew sometimes forces it to loose its original charm, even if the sound is perfected. Ironically, imperfections are what makes things/people more appealing. I’m interested to see how this one  plays out.