The Aussies are just coming in hot. Last week we reviewed St. Helen’s awesome album “Heavy Profession,” and now Wolf & Cub is stimulating our aural appendages with some more kick-ass Australian sound. Coming through with a proper follow up to their psychedelic debut “Vessels,” their new goods “Science and Sorcery” delivers a cosmic soundscape filled with dark holes and exploding galaxies of music you can dance to. Featuring two drummers, this Adelaide quartet can pound out the big riffs, ground-shaking basslines and drum beats to make your panties drop.

Their opening track “Seven Sevens” pumps you up for the proceeding tracks of the album. It has a great dance vibe to it with a tripped-out indie sound. “What Are They Running” is another favorite. If this song doesn’t allure you to run around buck-naked under the stars (and under the influence), then you’re just a square bear that needs to pull the stick out of their ass and loosen up a bit. It’s psychedelic dance rock at its best with an Afro twist.

After supporting acts such as TV On The Radio, The Killers, Queens of the Stone Age, Wolfmother, and more, Wolf & Cub are paving a smooth road to becoming the headlining act. Download their track “Seven Sevens” here and check out the video to their new single, “One To The Other” here. Good shit and a definite album to add to your collection. 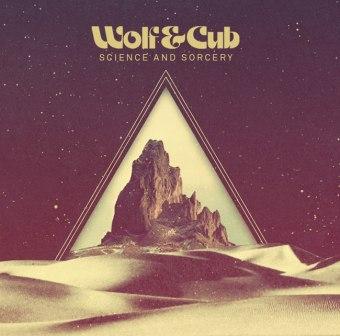 One thought on “"Science and Sorcery" by Wolf & Cub – Album Review”