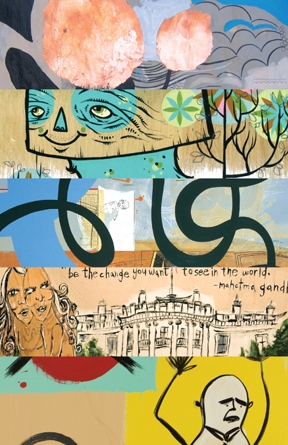 “Weekend Pacifists”, opening August 22nd at Subliminal Projects, showcases five artists whose lives and works have crisscrossed the skateboarding and lowbrow art worlds throughout the better part of the ’90s and ’00s. Collectively, their art is dotted with both whimsy and sociopolitics, not exactly the voice of a generation but mabe justa voice of a generation. Make that five voices, actually. Here’s what they each have to say about the show’s title:

Andy Jenkins “I work a regular schedule during the week and it’s anything but passive. On the weekend I become passive, as my personal work steers me around by the hands.”

Michael Myers “To me, the ‘Weekend Pacifists’ is about the feeling of hope and renewal that happens weekend after weekend. The weekend pacifist is about comaraderie, spirituality, gratefulness, and the quest for being content in the now and for the week ahead.”

Chris Pastras “I’m a pacifist who loves the weekend, so I guess I fit the bill pretty well.”

Russ Pope “Weekend Pacifists? Pacified by the weekend on a weekly basis. Good Stuff. Living everyday like it’s a weekend, not saving the good times for two days a week.”

Michael Sieben “Weekend Warriors is an album by Ted Nugent that was released in 1978. It’s also a term used to describe people who follow their passions on the weekend. The phrase ‘Weekend Pacifists’ describes an individual who is dedicated to their passion full time thus leaving the weekend open to relaxing or taking a break from the war. Hopefully that doesn’t sound too pretentious.”